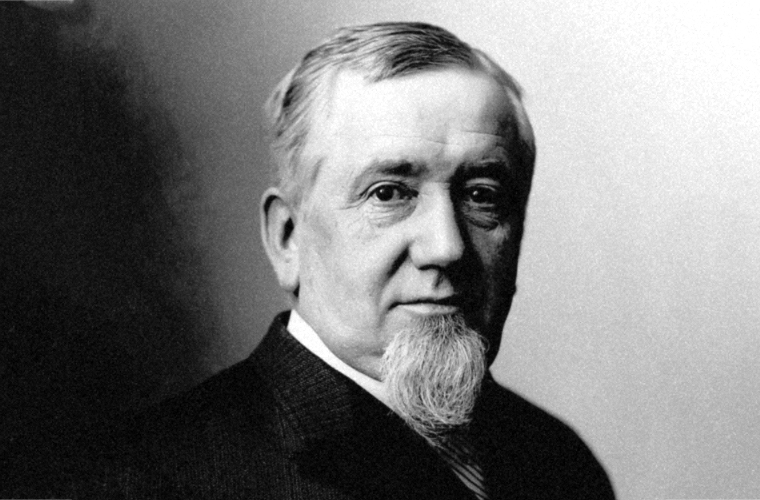 George M. Pullman, in full George Mortimer Pullman, (born March 3, 1831, Brocton, New York, U.S.—died October 19, 1897, Chicago), American industrialist and inventor of the Pullman sleeping car, a luxurious railroad coach designed for overnight travel. In 1894 workers at his Pullman’s Palace Car Company initiated the Pullman Strike, which severely disrupted rail travel in the midwestern United States and established the use of the injunction as a means of strikebreaking.

Pullman was the third of 10 children born to James and Emily Pullman. The family relocated to Albion, New York, in 1845 so that Pullman’s father, a carpenter, could work on the Erie Canal. His specialty was moving structures out of the way of the canal with jackscrews and a device he patented in 1841. When he died in 1853, George Pullman took over the business, winning a contract with the state of New York the following year to move some 20 buildings from the path of the Erie Canal.

In 1857 Pullman opened a similar business in Chicago, where much help was needed in raising buildings above the Lake Michigan flood plain, in part to facilitate the installation of a modern sewerage system. Pullman’s company was one of several firms hired to lift multistoried buildings, as well as whole city blocks, by four to six feet (1.2 to 1.8 metres). As Pullman realized, however, the city would have less need of his services as new buildings were erected with better foundations. After exploring several possibilities, he decided on the manufacture and leasing of railroad cars.

The American railroad system at that time was expanding enormously. Although the greatest impact of the new rail lines may have been on the transport of raw materials and finished goods, Pullman’s interest lay in passenger travel. He himself frequently used railroads in pursuit of business but did not enjoy the experience. Regular cars were uncomfortable and dirty, and sleeping cars, which were then just beginning to appear, were unsatisfactory, with cramped beds and inadequate ventilation. In partnership with Benjamin Field, a friend and former New York state senator, he decided to build a better sleeper, one that was not only comfortable but also luxurious, and he persuaded the Chicago, Alton, and St. Louis Railroad to allow him to convert two of its cars. Debuted in August 1859, the Pullman sleepers were an immediate success. Some reviews compared them to steamboat cabins and declared them to be the most luxurious way to travel.

Pullman also briefly caught the gold fever then spreading through the country in 1859. He relocated to Colorado, where he quickly realized that a profitable business could be made in catering to the needs of miners. He and a group of partners soon opened Cold Spring Ranch in Central City, which became popular with miners needing a meal, a bed, and supplies. Miners also stopped there to switch out their tired teams of animals for fresh ones before ascending the mountain passes, earning the ranch the name Pullman’s Switch.

Pullman returned to Chicago in the 1860s and, like most wealthy men, hired a replacement to serve in his stead in the Civil War (1861–65). He devoted his time to expanding his business, introducing new and even-more-luxurious train sleepers. The first real (unconverted) the Pullman car—the “ Pioneer,” invented jointly with Field—appeared in 1865. It contained folding upper berths and seat cushions that could be extended to make lower berths. Although expensive, the cars garnered national attention, especially after Pullman managed to have several of them included in the train that bore Abraham Lincoln’s body back to Springfield, Illinois, in 1865. (In fact, the slain president’s son Robert Todd Lincoln succeeded Pullman as president of the Pullman Company upon the latter’s death in 1897, serving until 1911.)

In 1867 the partnership between Pullman and Field was dissolved, and Pullman became president of the newly launched Pullman Palace Car Company. The company grew steadily during the next two decades. By 1879 the company had boasted 464 cars for lease, gross annual earnings of $2.2 million, and net annual profits of almost $1 million. The company also manufactured and sold freight, passenger, refrigerator, street, and elevated cars. By the early 1890s, it had a capitalization of more than $36 million.

The most unusual aspect of Pullman’s business was the town he constructed for his workers, which he called Pullman. He began planning the town in 1879, and in 1880 he purchased 4,000 acres (1,620 hectares) adjacent to his factory and near Lake Calumet, some 14 miles (23 km) south of Chicago, for $800,000. The town, inaugurated on January 1, 1881, was not a municipality in the normal sense: it was an effort, as George Pullman saw it, to solve the problems of labor unrest and poverty. The 1,300 original structures included housing for workers, shopping areas, churches, theatres, parks, and a library. The centerpiece was a towered administration building and the nearby Hotel Florence, named for Pullman’s daughter.

Pullman believed that the country air and the fine facilities—as well as the absence of labor agitators, saloons, and red-light districts—would produce a happy and loyal workforce. The planned community became a leading attraction during the 1893 World’s Columbian Exposition in Chicago, and the nation’s press praised George Pullman for his benevolence and vision.

What enthusiasts failed to see was that Pullman was little more than a company town and that George Pullman ruled it like a feudal lord. The housing within it reflected the social hierarchy of the workforce. Freestanding homes were for executives, row houses for skilled or at least senior workers, tenements for unskilled workers, and rooming houses for common laborers. George Pullman prohibited independent newspapers, public speeches, town meetings, or open discussion. His inspectors regularly entered homes to check for cleanliness, and the company could terminate leases on 10 days’ notice. The churches often stood empty because approved (Protestant) denominations would not pay the high rent, and no other congregations were allowed. Richard T. Ely, the noted Wisconsin economist and Progressive social commentator, wrote that the power exercised by Otto von Bismarck, the chancellor who had unified modern Germany, was “utterly insignificant when compared with the ruling authority of the Pullman Palace Car Company in Pullman.” 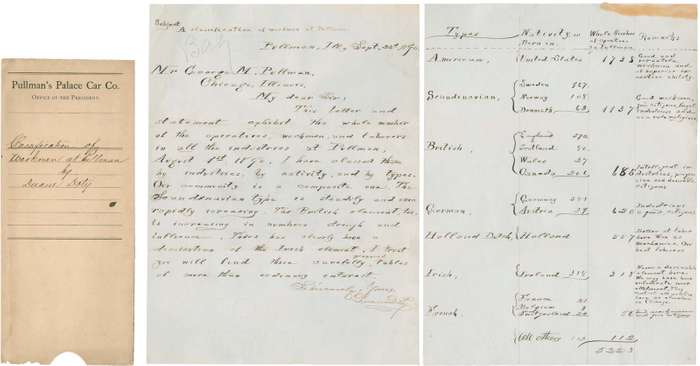 Although workers were not required to live in the town, they were strongly encouraged to do so, and though rents were higher than those in surrounding areas—averaging $14 a month—many chose to reside there because living conditions were in fact better, something even Pullman’s critics conceded. As pleasant as the town might have been, however, Pullman expected it to make money. On payday, he issued workers who lived in the town two checks, one for the rent and the other for the balance of the wages. A paymaster delivered the checks with a rent collector in tow, and workers were required to immediately endorse and hand back the rent check. By 1892 the community was indeed profitable, with a valuation of more than $5 million.

When Pullman’s business fell off amid the economic depression that began in 1893, he cut jobs and wages and increased working hours in order to lower costs, though he did not reduce the dividends he paid to stockholders. Nor did he reduce the rents or the prices of goods and utilities in Pullman. For those who lived in the town, wages beyond rent had been barely enough to live on even in prosperous times; now there was hardly anything left afterward. Many of the workers, driven to desperation, joined the American Railway Union (ARU). When a grievance committee of workers attempted to meet with Pullman, he had them all fired. On May 11, 1894, the Pullman workers went on strike and looked to the ARU and its leader, Eugene V. Debs, for help.

After Pullman refused arbitration of the dispute, Debs called for a nationwide boycott of Pullman cars. Sympathy strikes by union locals occurred in states and territories from Ohio to California, and violence and rioting of disputed origin and intensity broke out, centering in Chicago. Gov. John P. Altgeld of Illinois, who sympathized with the strikers, refused to call out the militia. On July 2, in part acceding to requests from the railroads, U.S. Attorney General Richard Olney procured an injunction from federal judges to halt acts impeding mail service and interstate commerce. On July 4, Pres. Grover Cleveland, acting on Olney’s advice, ordered 2,500 federal troops to Chicago. The strike ended within the week, and the troops were recalled on July 20.

George Pullman and his business thrived in the years immediately following the strike. He headed a company that built the Metropolitan elevated railway system in New York City, and his factory continued to build sleeping cars for the nation’s rail system. The Pullman Company merged in 1930 with the Standard Steel Car Company to become the Pullman-Standard Company, and it built its last car for Amtrak in 1982. Soon afterward the company faded away, and its plants shut down; the remaining assets were sold off in 1987.

The labor movement continued to revile Pullman. After he died of a heart attack in 1897, he was buried at night in a lead-lined coffin within an elaborately reinforced steel-and-concrete vault. Workers then poured several tons of cement over the vault to prevent his body from being exhumed and desecrated by labor activists.