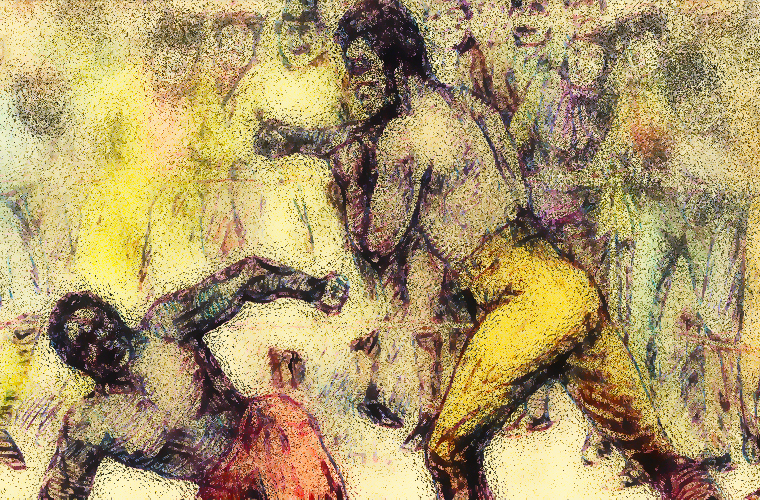 While slaves in the U.S. could be called upon to perform for their owner’s forms of entertainment, such as singing and dancing, male slaves also had the arduous task of fighting for the masters.

Fights involving bare-knuckles were arranged by the slave owners for their physically imposing slaves on the same farm to determine who was the strongest.

Those who endure and beat the other enslaved are pitted against champions of the other plantations.

And in what is termed ‘Battle Royale’, the enslaved males are put in a ring or circled to beat each other till near-death while earning a little reward or none at all.

Jack Johnson nicknamed the Galveston Giant, the first African American world heavyweight boxing champion from 1908–1915, is said to have emerged from the process in Galveston, Texas. Johnson’s parents were both enslaved.

Like Jack Johnson, another Black boxing great; Tom Molineaux born a slave on a plantation farm in Virginia in 1784 boxed his way to freedom from slavery thanks to his strong fists with which he fought many other slaves in what was a great source of entertainment for the local plantation owners whom he slaved for.

America’s first boxing star in the nineteenth century; Molineaux earned his freedom after winning a boxing match against a slave from a rival plantation. His master is said to have won a total of $100,000 from that fight. Molineaux’s slave owner granted him his freedom plus a sum of $500 as a reward from being victorious in that fight. It was a first, as both acts had never happened before. Even though Molineaux’s slave owner had promised him freedom if he won before the fight, it was rare for the owners to honor their pledges.

A former enslaved on a cotton plantation in Antebellum Alabama named John Finnely recalled watching slave fights also known as ‘Nigger Fights’ where masters of different plantations matched their slaves by size and then bet on them.

He added that his master had an enslaved named Tom who weighed 150 pounds and was an “awful good fight” adding he was “quick lak a cat an’ powerful fo’ his size an’ he lak to fight.” Finnely added that Tom always won his fight quick with no one lasting long with him.

The bare-knuckle fights were a huge source of making income by white slave owners who gambled with the lives of the blacks aside exploiting them to boost their economic fortunes on their plantations.