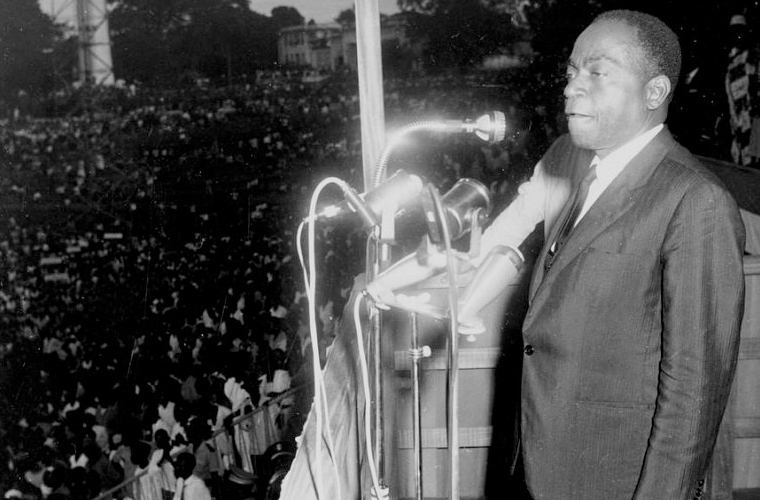 Félix Houphouët-Boigny, Ivory Coast’s first president, is a man who divides opinion even in death.

Unlike Africa’s beloved freedom fighters such as Nkrumah, Nyerere, Sekou Toure, and Patrice Lumumba, Houphouët-Boigny is often lumped together with others who are deemed to have let down their citizens and de-accelerated the advancement of their state.

Prior to being president, he served as a medical aide to a doctor, union leader, and planter.

Houphouët-Boigny’s coziness to the French who colonized the country has been a source of discontentment for many Africans.

Perhaps, him serving in the French Parliament and holding several ministerial positions within the French government thanks to the assimilation policy, might have been his source of grooming in protecting French interests even against the Ivorian people and other African states.

Explo N. Nani-Kofi, observes: “…..as early as 1959, Houphouët–Boigny expelled his deputy, Jean-Baptiste Mockey for leading a group of people within Boigny’s party and government to openly oppose the government’s Francophone policies. He was accused of plotting to kill Boigny through the use of voodoo. In 1993, there were more than 100 secret trials in which Mockey and others like Ernest Boka, head of the Supreme Court, were implicated.”

Nani-Kofi continues: “Houphouët–Boigny had a poor relationship with governments in West Africa who were not the favorites of the West. Houphouët is alleged to have supported rebels and plotters against the regimes of Kwame Nkrumah in Ghana, Sekou Toure in Guinea and Patrice Lumumba in the present-day DCR (Democratic Republic of Congo).”

Nani-Kofi explains further: “He’s also associated with the coup against the pro-Soviet Mathieu in Benin in January 1977. He supported Jonas Savimbi’s UNITA when the ruling government in Angola was pro-Soviet and UNITA was the favorite of the USA in Angola. It’s believed that he worked closely with Blaise Compaore in the overthrow of Thomas Sankara in Burkina Faso. He influenced French backing for Charles Taylor’s rebel forces in Liberia.”

Houphouët-Boigny covert and overt attempts at toppling African regimes hold truth. For Guinea’s Sekou Toure disregarding the French, he formed the National Front for the Liberation of Guinea, a reserve of soldiers ready to overthrow his government.

For Nkrumah, since he supported Toure to spite the French, Houphouët-Boigny accused him of working to destabilize his country, further calling for the boycott of the Organisation of African Unity (OAU) meeting in Accra in 1963.

In 1966, when the CIA, aided by elements in the Ghana Police and Army, overthrew Nkrumah’s government, it used Ivory Coast as the base for its missions.

In Liberia, Houphouët-Boigny never forgave President Samuel Doe for killing and deposing William Tolbert who happened to be his friend and in-law.

According to former Assistant Secretary of State for African Affairs Herman J. Cohen, the guerilla’s insurgency was promoted and financed by Houphouët.

There is talk Houphouët-Boigny also fed his political opponents to crocodiles as described in VS Naipaul’s “The Crocodiles of Yamoussoukro” (See his essay collection “The Writer and the World: Essays”). His nicknames include “Mao Tse Houphouët” and “the Stalinist billionaire”.

Stephen Smith writes of Houphouët-Boigny: “However, though he made history, he did not make it into history, at least not as gloriously as Nkrumah, Nyerere, Sekou Toure or Patrice Lumumba. Houphouët-Boigny is generally overlooked or else dismissed as a ‘lackey of the French” (See “Remembering Felix Houphouet-Boigny, Father of the Ivory Coast’s (In)dependence”).

Again on the downside for the president is his rigid one-party state until his death, despite attempting to groom a lackluster Konan Bédié, a fellow Akan, to succeed him upon his death. He is accused of operating a political system purely based on ethnocracy or ethnic democracy.

Tiemoko Coulibaly (See “Cult of a Dead Dictator: Ivory Coast Deferred”) observes: “Yet Houphouët-Boigny’s legacy is a major tragedy for Ivory Coast. The triumphant resurgence of Houphouët-Boigny worship, accompanied by the rise of Ivorian power, signals the failure of a system that always relied on tribalism, xenophobia, corruption, and prevarication.”

The exclusion of Northern Ivoirians in national politics, the expulsion of Dahomeyans from Ivory Coast, presidential preferences for Ivory Coast’s Christian minority, and presidential slighting of Ivory Coast’s Moslem majority were characteristics of Houphouët-Boigny’s presidency.

They were features which later played no small role in Ivory Coast’s electoral violence and civil war.

Alistair Boddy-Evans writes about his other questionable acts: “Houphouët–Boigny recognized Biafra when it attempted secession from Nigeria in 1967, exchanged ambassadors with the Soviet Union, and advocated working with South Africa…One issue which threatened his government was the number of French nationals holding bureaucratic posts in his government—thousands had been invited into the country to help run things.”

When it came to the Biafra quest for independence also, he gave official sanctuary to Biafran military leaders favoring Biafran secession from a federalized Nigeria. This is largely because France’s Machiavelli supported Col. Chukwuemeka O. Ojukwu.

“In his final days, Houphouët–Boigny had a massive basilica built…It cost an estimated $300m, which he claimed came from his own funds…At the same time as the fortune was spent on the basilica, Cote d’Ivoire was forced to suspend its debt payments and introduce austerity legislation. He had an estimated $10 million when he died, including several villas in France,” writes columnist Francis Kwarteng.

Houphouët–Boigny built the basilica in Yamoussoukro, his hometown and named it the new capital, relegating Abidjan. Many regard the edifice as a misplaced national priority.

Questions have been asked about how the basilica improved the living standard and life expectancy of the average Ivorian.

Being in charge for three decades, no matter how deficient a leader is, he is bound to do some good so Houphouët-Boigny is credited with relative economic prosperity on the back of good cocoa yields and sales. The country is the world’s leading producer of the beans.