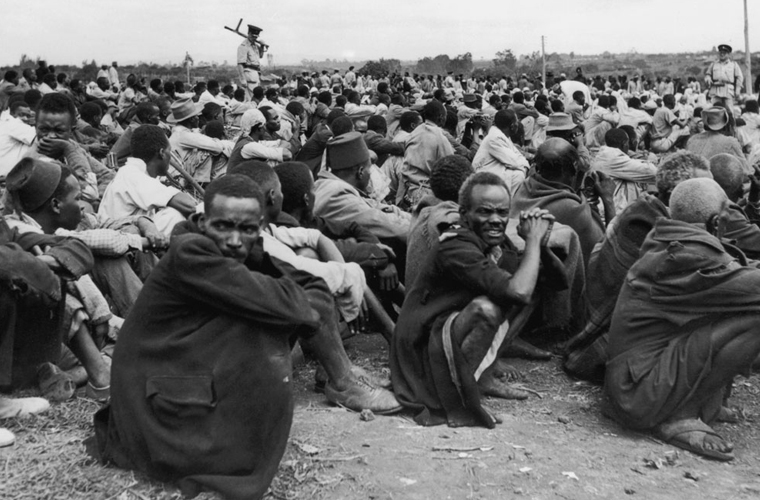 The Mau Mau movement of Kenya was a nationalist armed peasant revolt against the British colonial state, its policies, and its local supporters. The overwhelming majority of the Mau Mau fighters and of their supporters, who formed the “passive wing,” came from the Kikuyu ethnic group in Central Province. There was also representation in the movement from the Embu, Kamba, and Meru ethnic groups. In addition, available evidence shows that some individual members of the Luo, Luyia and even Maasai ethnic groups participated in the revolt as well.

Most of the Mau Mau guerrillas were young men and landless peasants. Some of these peasants had lost land to corrupt chiefs and other “landed gentry” in Central Province, while others were victims of land appropriation carried out to enable European settlement. Repatriated African squatters from the white farms in the Rift Valley fueled the ranks of the guerrillas, as did the economically desperate and unemployed Kikuyu in Nairobi and the surrounding urban centers. During the post–World War II period, there was massive African unemployment in the urban areas of Kenya, along with very poor housing (or no housing at all) and high inflation.

Among the Kikuyu, the embrace of a radical political posture was symbolized by taking the oath of unity with and allegiance to the Mau Mau movement. This oath, initially administered at Kiambu in 1950, was supposed to “inject courage into those who were initiated” (Edgerton 1989). It was also supposed to be administered to as many Kikuyu as possible. By July 1952 a new oath, the Batuni oath (“platoon oath”), was introduced. This was a warrior oath and it marked a further radicalization of the Mau Mau, which still remained an underground movement. When the colonial government, in a panic, declared a state of emergency in October 1952, the Mau Mau were not yet prepared to launch an all-out armed revolt. This started in earnest only after the declaration of a state of emergency, and the arrest and detention of most of the major African political leaders, including Jomo Kenyatta, Fred Kubai, Bildad Kaggia, and Ramogi Achieng’ Oneko.

Throughout the revolt, the Mau Mau guerrillas referred to themselves as the land and freedom army. This description indeed summarized the revolt’s principal causes, which were both economic and political. Scarcity of land, especially in Central Province, remained a major African grievance against the colonial government and white settlers. Hence, the attainment of fertile land, which signified general economic welfare and prosperity for African families, was a major objective of the revolt. To this must be added the demand for vastly expanded opportunities in education, training, housing, and employment. Politically, the Mau Mau guerrillas remained steadfast in their demand for Kenya’s political independence from Britain.

The Mau Mau movement’s political objectives and even its ideology did not differ from the aims and objectives of the mainstream political independence party, the Kenya African Union (KAU); both sought political freedom (Uhuru ) and the restoration of African dignity. From 1944, when it was formed, until 1953, when it was banned, KAU was the preeminent African political organization in Kenya. Its formation represented the “first attempt at territorial nationalism,” and also the most prominent “legitimate political outlet” for Africans (Maloba 1993, p. 51). Still, KAU’s political agitation did not lead to any remarkable victories. By 1947 none of its leaders, including Kenyatta, expected Kenya to achieve its political freedom during their lifetime.

One of the distinguishing features of the Mau Mau is that it remains perhaps the only major nationalist revolutionary movement to have been led almost entirely by peasants, many of them illiterate. The movement had no external sources of political or material support. Even the British government arrived at this conclusion, having determined that the Soviet Embassy in Addis Ababa, Ethiopia, had not provided any help whatsoever to the revolt or even established any verifiable contacts. The movement also lacked any propaganda machinery to spread its message beyond Central Province. Together with the British government in London, the colonial government in Nairobi took advantage of this weakness and launched a harsh and effective propaganda campaign against the Mau Mau and Kenyan nationalism.

The revolt was portrayed as irrational, and as a reversion to primitive savagery by Africans traumatized by the stress of modern (Western) civilization. The British government firmly maintained the position that the revolt was not caused by economic conditions, but rather an organized criminal enterprise. In this propaganda offensive, a lot of emphases was placed on the oaths taken by the supporters of the revolt; almost routinely, many of these oaths were described as “bestial.” It is this image of a senseless, savage, murderous enterprise that would haunt the Mau Mau for many years to come. In the West, major newspapers and magazines carried stories on the Mau Mau that reinforced British propaganda. Robert Ruark’s Something of Value (1955), a novel read widely in Britain and the United States, also echoed official propaganda by contrasting “white heroism” with “black savagery.”

For four years from October 1952 to 1956, the Mau Mau guerrillas operated from the forests of Mount Kenya and the Aberdares. Although they were outgunned throughout the duration of the revolt, these guerrillas fought with singular courage and determination against the combined forces of the colonial government’s army, British troops, and the Home Guards (paramilitary units of local Kikuyu/Embu/Meru people supporting the colonial government’s military and political objectives against the Mau Mau fighters and their objectives). One of the most celebrated leaders of the Mau Mau was Dedan Kimathi, who was based in the Aberdares, and who sought, in 1953 and 1954, to establish some unity among the various guerrilla units operating in the forests. These efforts did not succeed, and as a result the Mau Mau never had an overall leader or commander.

In response to the revolt, the British government undertook a major rehabilitation campaign in Central Province in order to “remake Kenya” by defeating radicalism and reinforcing the power of the conservative Kikuyu “landed gentry” and the Home Guards. Members of these groups would emerge triumphant in the post-emergency period. The rehabilitation campaign was carried out in the detention camps and even in the Kikuyu reserve. Its objective was to get the detained and arrested Kikuyu to renounce the Mau Mau and its radicalism. Christian religious indoctrination, sanctioned by the colonial government, played a major role in the rehabilitation process.

Although defeated militarily, the Mau Mau revolt was clearly instrumental in forcing the British government to undertake immediate political reforms. These reforms included the reinstatement of African political parties in 1955, and then the promulgation of several constitutional reforms that eventually led to the attainment of political independence on December 12, 1963.