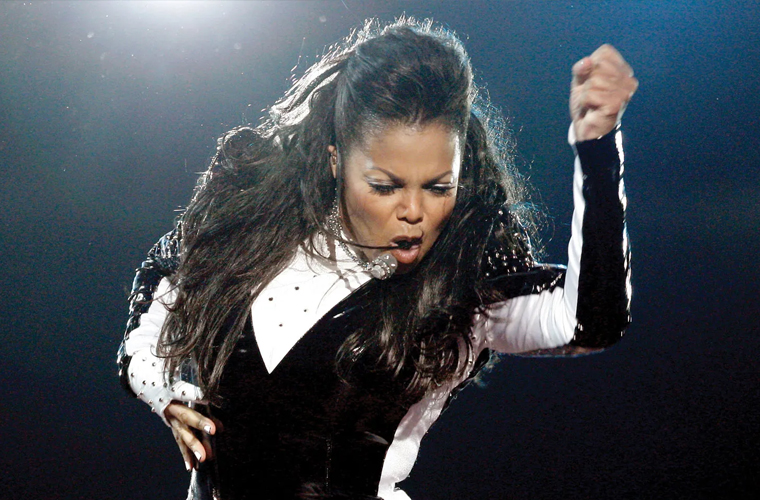 Janet Jackson is an award-winning recording artist and actress who’s the youngest child of the Jackson family of musicians. She is best known for hit singles like “Nasty,” “Love Will Never Do (Without You),” “That’s the Way Love Goes,” “Together Again” and “All for You.” Jackson is ranked as one of the best-selling artists in contemporary music, having released an array of multi-platinum albums like Control, Rhythm Nation 1814, and Janet, in collaboration with Jimmy Jam and Terry Lewis. In 2015 she reunited with the two producers for Unbreakable, which became her seventh No. 1 album.

Famous Family
Singer, songwriter, and actress Janet Jackson were born on May 16, 1966, in Gary, Indiana. The youngest of nine children born to Katherine Esther and Joseph Walter Jackson, she grew up in the affluence of a show business family. Her five brothers — Jackie, Tito, Marlon, Jermaine, and Michael — signed a contract with Motown Records in 1968 and would go on to rule the charts as The Jackson Five, with such hits as “I Want You Back,” “The Love You Save,” “ABC” and “Dancing Machine.”

In late 1969, Jackson took her daughters Rebbie, La Toya, and Janet as well as youngest son Randy to join her husband in Los Angeles, where they moved to further the band’s career. (Marlon’s twin brother, Brandon, had died within 24 hours of the twins’ premature birth in 1957.)

The Jackson children were raised in the Jehovah’s Witness faith, as Katherine Jackson had been baptized as a Witness in the ’60s. La Toya famously chronicled their tumultuous childhood — including charges of physical and sexual abuse by father Joseph — in her tell-all autobiography, but Janet and her other siblings disputed La Toya’s account. The tensions within the family certainly increased on account of Michael’s eventual emergence as a solo artist and superstar.

Early Career
Janet Jackson first appeared onstage in April 1974, singing and doing impressions alongside her brother Randy in the Jackson family’s Las Vegas act. In 1976, she appeared on The Jacksons, a summer replacement television show. Her performance earned her the attention of a producer who hired her to play Penny, a regular on the TV comedy series Good Times, from 1977-79. She continued her television work in the short-lived A New Kind of Family (1979), the sitcom Different Strokes (1984-5), and the teen drama Fame (1984-5), based at a New York City performing arts high school.

Jackson attended public school in Encino, California for some time before switching to Valley Professional School, from which she graduated in 1984. During her time on Fame, she was able to break away from her family’s supervision while on location in New York. In September 1984, she eloped with James DeBarge, a musician in the group DeBarge, also on the Motown label. Jackson’s family disapproved of DeBarge, and the marriage was brief, as she applied for an annulment in January 1985, which was granted the following November.

With the guidance of her brother Michael, she released her debut album, Janet Jackson, in 1982. The album reached No. 84 on the pop charts and had three hit singles, including “Young Love” and “Give Your Love to Me.” The self-titled album sold about 250,000 copies, as did her follow-up, Dream Street, which featured contributions from her brothers.

Jackson scored her first major success in 1986 with Control, released on the A&M label. Control, produced with the writing-producing team of Jimmy Jam (James Harris III) and Terry Lewis, sold eight million copies worldwide and featured the No. 1 single “When I Think of You” as well as the Top 5 title track and “What Have You Done For Me Lately.” Nominated for three Grammy Awards and nine American Music Awards, it won two of the latter. Jackson’s new, assured style, stage presence, and dancing ability were all showcased in her videos (with choreography by Paula Abdul), and combined to make her a star.

Her next album, Janet Jackson’s Rhythm Nation 1814 (a title potentially referring to the year the American national anthem was written), was a socially conscious outing also produced and co-written by Jam and Lewis. The album spawned a number of hit singles, including the chart-toppers “Miss You Much,” “Escapade,” “Black Cat” (written by Jackson herself), and “Love Will Never Do (Without You),” and again sold around eight million copies. Rhythm Nation, which won three American Music Awards, made Jackson the first artist to have seven Top 5 hits from a single album. Jackson embarked on her first tour in the spring of 1990.

Janet Jackson’s contract with Virgin Records, signed in March 1991, was at the time the largest recording contract in history, at $32 million. (Michael Jackson reportedly held off signing his so-called “billion-dollar” contract until after Janet signed so as not to steal her publicity.)

In the summer of 1993, Jackson unveiled her fifth album, titled Janet, and also had her first lead big-screen role in the drama Poetic Justice, co-starring rapper Tupac Shakur. The film was directed by John Singleton, who had received two Oscar nominations for writing and directing his debut feature, Boyz n the Hood. The film received disappointing reviews, but Jackson received an Oscar nomination for the No. 1 song “Again,” which she performed on the soundtrack.

The sensual Janet (another Jam and Lewis collaboration), sold more than six million copies and featured “That’s the Way Love Goes,” “If” and “Any Time, Any Place.” The latter became Jackson’s 14th gold single, tying her at the time with Aretha Franklin as the female solo singer with the most gold singles. In addition, “That’s the Way Love Goes” earned a Grammy for Best Rhythm and Blues Song. Jackson also released a song with her brother Michael entitled “Scream” in 1995. The accompanying clip cost $7 million to produce, making it the most expensive music video ever made, and went on to win a Grammy for Best Short Form Video. That same year Jackson released her compilation album Design of a Decade, containing the lush ode to travel “Runaway,” a Top 5 hit.

Jackson’s sixth full-length studio release, the edgy The Velvet Rope (1997), brought her suggestive style to a whole new level, generating some impressive buzz with lyrics about open sexuality, online alienation, childhood pain, loss, depression, and belonging. But the album didn’t reach the sales records of her three previous blockbusters, though it did offer the No. 1 track “Together Again,” a tribute to those who have passed from AIDS, as well as “Got ‘Till It’s Gone,” which featured a Joni Mitchell sample and earned Jackson another music video Grammy.

On a more personal level, Jackson made headlines when it was revealed that she had been secretly married to her manager and longtime boyfriend, Rene Elizondo, for eight years. Jackson announced their separation in 1999, but the fact of their marriage (which Jackson’s sisters La Toya and Rebbie had earlier alleged to the press) became public when Elizondo filed for divorce in May of 2000.

Jackson continued her acting career with a role opposite Eddie Murphy in the blockbuster summer comedy The Nutty Professor II (2000). She also scored another pop No. 1 with its bouncy soundtrack single “Doesn’t Really Matter.” A year later, she released the hit album, All For You, which, like The Velvet Rope, was more sexually explicit than her earlier releases. The success of All For You and her subsequent world tour, along with a reported $80 million recording deal with Virgin, put Jackson squarely back on top of the pop world.

Super Bowl Halftime Show
Jackson’s star continued to rise until an incident at the Super Bowl halftime show in 2004 caused a slight falter. During a live performance with Justin Timberlake, Jackson’s right breast was exposed during a costume reveal that both parties said was an accident. The “wardrobe malfunction” caused an uproar among both fans and the Federal Communications Commission. Jackson subsequently failed to appear at the Grammy Awards and dropped out of a television project in which she was to play Lena Horne at the elder actress’ request.

In 2017, after it was announced that Timberlake would perform at Super Bowl LII in February 2018, the hashtag #JusticeForJanet emerged on social media, with many calling for Timberlake to publicly apologize to Jackson for the infamous “wardrobe malfunction” in 2004. Addressing the controversy in an interview, Timberlake said he had patched things up with Jackson over any lingering resentment from the incident.

Music, Movies, and Brother’s Death
Jackson persevered with both her music and screen career. 2004’s Damito Jo, offering collaborations with Kanye West and Jay-Z, was followed up by 20 Y.O. (2006), which featured the Nelly track “Call on Me.” Then in 2008, Jackson released the No. 1 album Discipline, a well-received affair that featured “Feedback,” a dashing disco number calling for diversity on the dance floor.

Collaborations with Tyler Perry
Around this time Jackson was jumping back into film work as part of the ensemble cast of 2007’s Why Did I Get Married? directed by Tyler Perry. The movie was a hit that yielded a 2011 sequel, and Jackson also worked with Perry in For Colored Girls, a 2010 adaptation of the lauded literary work by Ntozake Shange.

Jackson and her family faced immense tragedy when brother Michael underwent cardiac arrest and passed away on June 25, 2009. Jackson spoke to mourners at the BET Awards only days after his death, with later reports swirling around a family conflict involving Michael’s estate and children.

Book, Marriage, and Son
In 2011, Jackson released the book True You: A Journey to Finding and Loving Yourself, which dealt candidly with ideas around body image and her struggles with weight. Co-written by journalist David Ritz, the book became a No. 1 New York Times best-seller.

After having dated producer Jermaine Dupri for some time, Jackson later married Qatari billionaire Wissam Al Mana in 2012. News outlets began reporting in February 2013 that the couple had wed the previous year. According to a statement the couple made to Entertainment Tonight, their wedding was a “quiet, private, and beautiful ceremony.” In May 2016, news broke that Jackson was pregnant with her first child. The news came two weeks before her 50th birthday. Jackson gave birth to a son, Eissa Al Mana, on January 3, 2017. In April 2017, it was reported that Jackson had split from Al Mana.

Shortly after dropping a new single in June 2015, the laid-back “No Sleeep,” Jackson embarked on a world tour. In the fall she released her 11th studio effort, Unbreakable, which reunited her with producers Jam and Lewis. Independently released on her own label, Rhythm Nation, Unbreakable became Jackson’s seventh No. 1 album, making her just one of three pop artists (along with Barbra Streisand and Bruce Springsteen) to have chart-topping albums in every decade dating back to the 1980s.

Jackson returned to the spotlight in 2019 with her induction into the Rock and Roll Hall of Fame. That year she also enjoyed a four-month residency at the Park MGM hotel and casino in Las Vegas and reissued Rhythm Nation to celebrate its 30-year anniversary. In February 2020, Jackson announced that she was heading out on tour again that summer to support her upcoming studio album, Black Diamond.