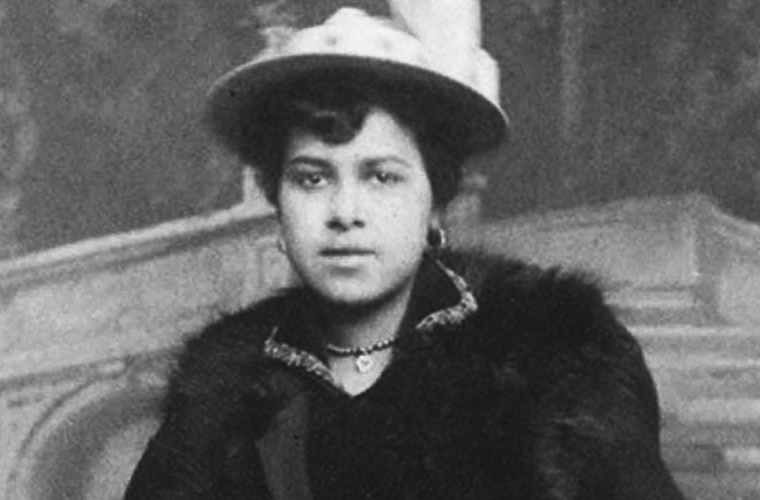 In a previously unmarked grave on Vesper Path lie the remains of Kittie T. Knox, born in 1874. Knox’s mother, Katherine Towle, was a white woman from the rural southern Maine town of East Parsonsfield who had worked as a “mill-girl” in Biddeford, while her father, John Knox, a tailor, was a black man from Philadelphia. The family lived on the border of Cambridgeport and East Cambridge. In the 1880s, Kittie Knox and her brother, Ernest Knox, moved with their mother to Irving Street in Boston, located on the North Slope of Beacon Hill, where a large population of African Americans lived.

While Kittie Knox earned her living as a seamstress and dressmaker, her avocation was bicycling. In her early years, she rode in Cottage City (now Oak Bluffs, Massachusetts), known for its racially mixed community. Knox came to cycling as it was emerging into both a competitive sport in the late 1800s and an affordable recreational pastime for the middle class. A hub for cycling, Boston was home to the first bicycling club in the U.S., and headquarters of the National League of American Wheelmen (L.A.W.).

“The [bicycle] came to play a surprising role in the women’s rights struggle,” scholars Julie Husband and Jim O’Loughlin write. “Victorian dresses, with their restrictive corsets and long heavy skirts, were impractical for bicycle riding. . . .Wearing bloomers or other reform clothing immediately put women in the center of controversy. Knox caused consternation by insisting on riding a man’s bike in knickerbockers (pantaloons worn by young boys) rather than a woman’s bike in a skirt. Despite this, she won a prize in a bicycle costume contest in Waltham, Massachusetts in 1895. “Kittie Knox was a strong rider, having completed several Century (100 miles) rides on one of the heavy bikes of that era,” scholar Lorenz Finison notes.

Described as a “pretty young colored girl who rides in the Riverside Cycle Club, Boston’s only colored club,” Knox became a member of the L.A.W. in 1893, just before the League enacted a “color bar.” She suffered the indignity of being challenged at the League’s national summer meet at Asbury Park in 1895 because she was, the Southern Cycler asserted, “This murky goddess of Beanville . . .  several checks shy of the complexion requirement, and . . . not eligible, and therefore, not a member, despite the fact she holds a membership card. Knox’s supporters, however, included George Perkins, a Massachusetts L.A. W. Official. Perkins declared during the National meet of the L.A.W. at Asbury Park that since she had joined the League prior to the “color bar,” “Miss Knox can stay in the league so long as she cares to remain.

Kittie Knox died in 1900 at Massachusetts General Hospital. She lived only 26 years and was buried at Mount Auburn in a public lot. Early in the Cemetery’s planning, H. A. S. Dearborn, one of the Cemetery’s designers, explained that “it is considered advisable that sites for single graves should be designated, in various parts of the Cemetery . . . to afford an opportunity for individuals, who have no families, and the friends of such strangers as may be wept and honored far distant from their native land, to procure eligible places of sepulture.  Mount Auburn’s records show no evidence that a stone was ever erected on Knox’s gravesite.

The Cemetery never knew of Knox’s extraordinary life until Lorenz Finison, a scholar researching the history of cycling, contacted the Cemetery to confirm Knox’s burial. Through Finison, Mount Auburn was able to connect with members of the Towle family, who were thrilled to learn of and visit the burial site of their famous ancestor.  Along with other donors, they have provided support to erect a monument on the formerly unmarked gravesite to honor the young activist of the bicycling world.