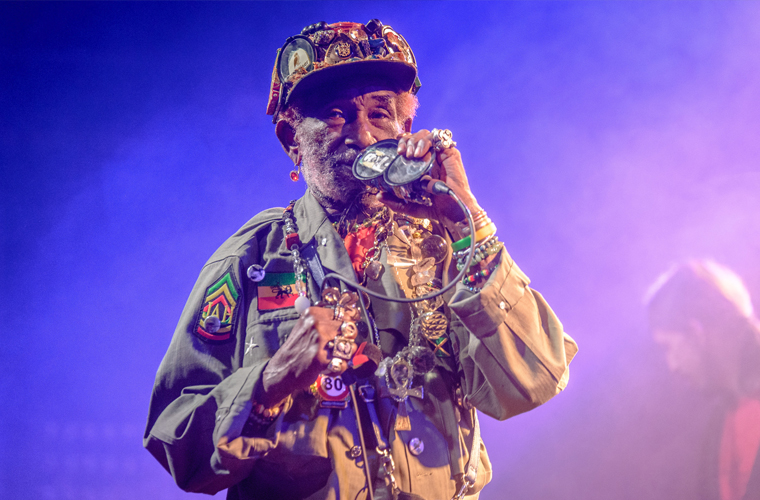 Lee “Scratch” Perry, byname of Rainford Hugh Perry, (born March 28, 1936, Kendal, Jamaica), Jamaican producer, songwriter, singer, and disc jockey who helped reshape reggae music. He was among the first Jamaican producer-musicians to use the studio as an instrument, and he pioneered the reggae instrumental form known as dub, in which sections of a rhythm track were removed and others emphasized through echo, distortion, repetition, and backward tape looping.

Perry’s debut recording in the early 1960s, “The Chicken Scratch,” earned him his nickname. At Coxsone Dodd’s Studio One in Kingston, he produced hits for reggae singers such as Justin Hines and Delroy Wilson as well as recording his own material. After scoring an instrumental hit with “The Upsetter” in the late 1960s, he named his label and band after it and played an important part in the early success of Jamaica’s biggest group, the Wailers (including Bob Marley and Peter Tosh). But his greatest innovations came after he built Black Ark studio behind his home in Kingston in 1974. He began experimenting with drum machines and space-age studio effects that would usher in the dub era and influence production techniques in reggae, hip-hop, and rock for decades afterward. A legendary eccentric, he was known to blow marijuana smoke on his finished master tapes to give them the proper “vibe,” and he reportedly burned down Black Ark in 1980.

Perry’s increasingly avant-garde albums continued to win critical praise well into the 21st century. Jamaican E.T. (2002) won the Grammy Award for best reggae album, and The End of an American Dream (2007), Repentance (2008), Revelation (2010), and Back on the Controls (2014) were all nominated in that category.