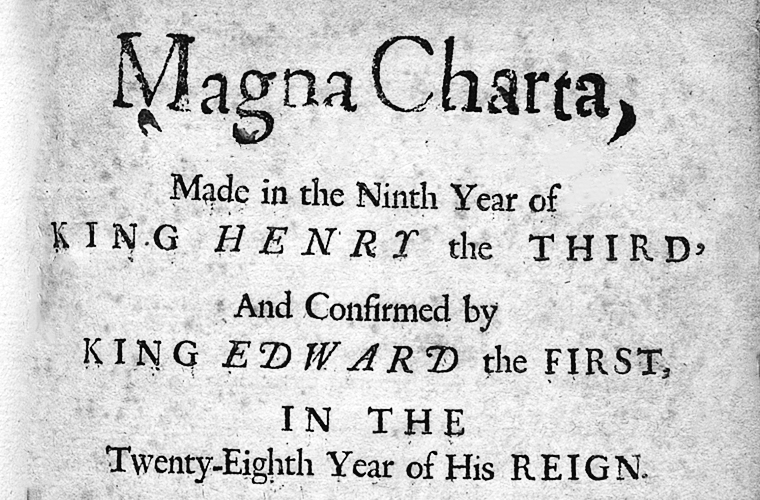 By 1215, thanks to years of unsuccessful foreign policies and heavy taxation demands, England’s King John was facing down a possible rebellion by the country’s powerful barons. Under duress, he agreed to a charter of liberties known as the Magna Carta (or Great Charter) that would place him and all of England’s future sovereigns within a rule of law. Though it was not initially successful, the document was reissued (with alterations) in 1216, 1217 and 1225, and eventually served as the foundation for the English system of common law. Later generations of Englishmen would celebrate the Magna Carta as a symbol of freedom from oppression, as would the Founding Fathers of the United States of America, who in 1776 looked to the charter as a historical precedent for asserting their liberty from the English crown.

John (the youngest son of Henry II and Eleanor of Aquitaine) was not the first English king to grant concessions to his citizens in the form of a charter, though he was the first one to do so under threat of civil war. Upon taking the throne in 1100, Henry I had issued a Coronation Charter in which he promised to limit taxation and confiscation of church revenues, among other abuses of power. But he went on to ignore these precepts, and the barons lacked the power to enforce them. They later gained more leverage, however, as a result of the English crown’s need to fund the Crusades and pay a ransom for John’s brother and predecessor, Richard I (the Lionheart), who was taken prisoner by Emperor Henry VI of Germany during the Third Crusade.

Did you know? Today, memorials stand at Runnymede to commemorate the site’s connection to freedom, justice, and liberty. In addition to the John F. Kennedy Memorial, Britain’s tribute to the 36th U.S. president, a rotunda built by the American Bar Association stands as “a tribute to Magna Carta, a symbol of freedom under law.”

In 1199, when Richard died without leaving an heir, John was forced to contend with a rival for succession in the form of his nephew Arthur (the young son of John’s deceased brother Geoffrey, Duke of Brittany). After a war with King Philip II of France, who supported Arthur, John was able to consolidate power. He immediately angered many former supporters with his cruel treatment of prisoners (including Arthur, who was probably murdered on John’s orders). By 1206, John’s renewed war with France had caused him to lose the duchies of Normandy and Anjou, among other territories.

A feud with Pope Innocent III, beginning in 1208, further damaged John’s prestige, and he became the first English sovereign to suffer the punishment of excommunication (later meted out to Henry VIII and Elizabeth I). After another embarrassing military defeat by France in 1213, John attempted to refill his coffers–and rebuild his reputation–by demanding scutage (money paid in lieu of military service) from the barons who had not joined him on the battlefield. By this time, Stephen Langton, whom the pope had named as archbishop of Canterbury over John’s initial opposition, was able to channel baronial unrest and put increasing pressure on the king for concessions.

With negotiations stalled early in 1215, civil war broke out, and the rebels–led by Baron Robert FitzWalter, John’s longtime adversary–gained control of London. Forced into a corner, John yielded, and on June 15, 1215, at Runnymede (located beside the River Thames, now in the county of Surrey), he accepted the terms included in a document called the Articles of the Barons. Four days later, after further modifications, the king and the barons issued a formal version of the document, which would become known as the Magna Carta. Intended as a peace treaty, the charter failed in his goals, as civil war broke out within three months. After John’s death in 1216, advisors to his nine-year-old son and successor, Henry III, reissued the Magna Carta with some of its most controversial clauses taken out, thus averting further conflict. The document was reissued again in 1217 and once again in 1225 (in return for a grant of taxation to the king). Each subsequent issue of the Magna Carta followed that “final” 1225 version.

Written in Latin, the Magna Carta (or Great Charter) was effectively the first written constitution in European history. Of its 63 clauses, many concerned the various property rights of barons and other powerful citizens, suggesting the limited intentions of the framers. The benefits of the charter were for centuries reserved for only the elite classes, while the majority of English citizens still lacked a voice in government. In the 17th century, however, two defining acts of English legislation–the Petition of Right (1628) and the Habeas Corpus Act (1679)–referred to Clause 39, which states that “no free man shall be…imprisoned or disseised [dispossessed]… except by the lawful judgment of his peers or by the law of the land.” Clause 40 (“To no one will we sell, to no one will we deny or delay right or justice”) also had dramatic implications for future legal systems in Britain and America.

In 1776, rebellious American colonists looked to the Magna Carta as a model for their demands of liberty from the English crown. Its legacy is especially evident in the Bill of Rights and the U.S. Constitution, and nowhere more so than in the Fifth Amendment (“Nor shall any persons be deprived of life, liberty or property without due process of law”), which echoes Clause 39. Many state constitutions also include ideas and phrases that can be traced directly to the historic document.