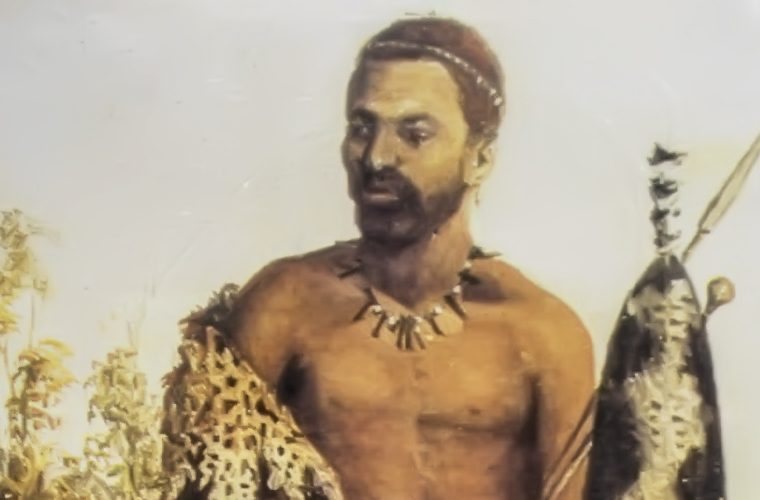 Makhanda (sometimes called Makana), also known as Nxele (the left-handed), lived from about 1790 to 1820 and was a skillful Xhosa military leader, orator, philosopher, and war doctor. He helped Ndlambe to consolidate his support among the Rarhabe and also to defeat Ndlambe’s nephew, the Rarhabe king Ngqika, at the battle of Amalinde in 1818. When the British intervened on the side of Ngqika, Makhanda led a full-scale invasion of the British-controlled Cape Colony in 1819.

Makhanda was the son of Balala, a commoner of Gonaqua (Khoi Khoi) origin who worked for an Afrikaner farmer. Makhanda lived, among other places, at Bethelsdorp (Qhaqhiwa) in the Uitenhage district of Cape Province. At first a monogamist, Makhanda subsequently married four wives.

Makhanda, an influential speaker, began his career as a diviner following a mystical experience. He was fascinated by Christian doctrine, especially the belief in the resurrection of the dead. Makhanda sought to synthesize Christian theology and the cosmology preached by European missionaries with African theology and cosmology as expressed in Xhosa and Khoi beliefs. Like many Africans drawn to Christian teachings before and after him, he at first enthusiastically adopted a pro-Christian position, urging the Rarhabe people to forsake the use of magic and war.

Around 1812, Makhanda joined Ndlambe’s followers, and, as a doctor, advisor, and rainmaker, amassed some wealth. In his search for the sources of white power, Makhanda investigated both natural and supernatural dimensions of the European world at the Cape. He spoke at great lengths with the Rev. Vanderlingen, the chaplain at Grahamstown, and with the missionary John Read, about theology and cosmology as he slowly increased his following and influence among the Rarhabe. Up to 1816, he viewed missionaries as coworkers in the same cause.

In 1816 a change in his relations with whites in general and missionaries in particular began. Makhanda considered himself a uniquely gifted person and felt that white missionaries did not accept or treat him as an equal. He began to place a greater weight on African beliefs and customs. By fusing traditional, religious, and personal experiences, Makhanda formulated a comprehensive cosmology to explain the conflict between Europeans and Africans.

He translated the emerging conflict between European and African world views as a contest between Thixo, the god of the whites, and Mdalidiphu (creator of the deep), the god of the blacks. Whites had murdered the son of their god, an obvious reference to the crucifixion of Christ. As a result, whites were expelled from their country and placed on the water from which they had landed in South Africa to conquer and take the land of the blacks but Mdalidiphu was a powerful god who would help the blacks to push the whites back. He advised blacks to worship by dancing, enjoying life, and making love so that their progeny would increase and fill the world.

At the height of his influence, Makhanda, as an advisor to Ndlambe, helped to wield together an alliance against the pro-colonial ruler, Ngqika. Ngqika was known for his fondness for alcohol, and despised for his incestuous relations with Thuthula, one of Ndlambe’s junior wives, while his close association with the British in the Cape Colony made him an unworthy standard bearer of the proud Rarhabe. Besides, Makhanda resented Ngqika for sponsoring his rival, the philosopher-theologian Ntsikana.

The alliance supporting Ndlambe included the Gcaleka, possibly under the command of Hintsa. In October 1818 Ngqika’s followers were enticed out of their defensive stronghold on the plains of Amalinde and in the battle of Amalinde which followed, heavy losses were inflicted on Ngqika’s followers.

Ngqika was forced to ask for British aid, claiming that he was being attacked because he tried to stop cattle raiding. A British-led force from Cape Colony, commanded by Colonel Brereton, invaded the Xhosa lands and captured 23,000 cattle. In retaliation, in 1819, Makhanda led an uncharacteristic daytime attack on Grahamstown in Cape Colony. In preparation for the attack, Makhanda, through an informer, had successfully drawn some of the colonial troops away from Grahamstown. Nevertheless, his forces were defeated by British cannon, firing grapeshot.

Three months later Makhanda appeared at the British camp and surrendered himself. On this occasion, he said: “It is said I caused the war. We will see whether peace will return when I give myself up.” He was sentenced to life imprisonment on Robben Island. The following year he drowned when a boat, in which he and 30 other prisoners were trying to escape, capsized. The Xhosa refused to believe, however, that he was dead and preserved his personal belongings until 1873. The Xhosa subsequently used the expression “Kukuza KukaNxele” (“The return of the left-handed one”) to refer to hope deferred.

Makhanda was one of the first Africans to attempt a cultural synthesis of African and European beliefs, but his fame rests on his ability to forge an alliance between different Xhosa polities, on military exploits, and on his struggle to preserve Xhosa independence in the face of British imperial interference. Makhanda is reputed to have prophesied about the whites: “There they come! They have crossed the Qagqiwa [Zwartkops River] and they have crossed the Nqweke [Sundays River]. Only one river more, the Nxuba [Fish], and then they will be on our land. What will become of you then?”