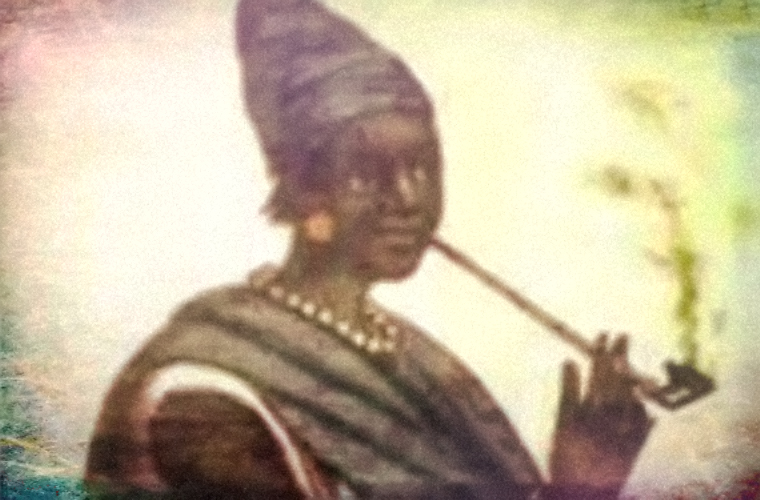 The invasion and tearing up of Africa happened in so many fronts and parts of Africa. Sometimes we believe that all the wars and brave resistances from Africans were not fully captured or reported. But for those reports of brave Africans who defended our motherland, we will always talk about them with pride.

Africa did not just surrender to the wickedness of the Europeans. No. We fought back for hundreds of years. And each time we defeated the enemy, he came back stronger and more determined to kill, loot, destroy, rape and rule. We beat them back more and they came back more.

With more guns and poisons, they came. We fought till we could fight no more. Because we realized that they were determined to kill us all if we continued fighting. So we surrendered hoping that the enemy would steal and then leave.

Hardly can one talk about Africans who fought against colonial invasion without remembering Queen of Wolof, Ndate Yalla Mbodj.

Ndate Yalla Mbodj was the second daughter of the Waalo Queen, Fatim Mbodj and King also known as (Brack) Amar Borso Mbodj. The Wolof Empire of Jolof was created in the 14th century, however, the empire fell apart and the Jolof, Waalo, Baol and Cayor States were created.

Having that some African empires practiced Matriarchy, the Lingeers; who were the Waalo women of royal blood, held power. The Lingeer gave her husband permission to rule as King (Brack). Lingeer Fatim Mbodj, in accordance with tradition, gave her husband Brack Amar Borso Mbodj permission to rule. They both had two daughters, Ndjeumbet and Ndate Yalla from their union, and they were both raised by their mother to manage and defend Waalo.

In 1820, the Berbers, also called Moors and known for slave trading, tried invading the land while the Brack was away for health reasons. Lingeer Fatim, alongside her female warriors, disguised themselves as men and repelled the Moors.

The Moors, on finding out that they were women, attacked the land brutally a second time. This time, Lingeer Fatim and her warriors were sure that they had lost to the Moors, and rather than be captured, they collectively killed themselves in a fire. Their suicide allowed only Ndjeumbet and Ndate Yalla escape so that they could carry on in power at only 12 and 10 years respectively.

The two princesses took over Waalo, and appointed their cousin Malick Mambodj, the Brack. It was just a secondary position. Ndjeumbet died in 1846 and Ndate Yalla became the sole ruler of Wallo at 36 years of age.

She once wrote to the colonial governor, Faidherbe Louis, regarding the French occupation plan of Mboyo Islands saying “the purpose of this letter is to let you know that Mboyo Island belongs to me, from my Grand Father to me today, nobody can state that this country belongs to them, it is only mine”

In response, the governor wrote her saying; “If you want our relation to remain sound, you must give back the 16 oxens you’re holding […] otherwise, I shall become your enemy and that would be your fault”

In 1855, the French colonizers sent a 15,000 man army to subdue Queen Ndate Yalla, at the time of the great battle, the Queen said “today we have been attacked by the invaders. Our army is in disarray, virtually all Waalo tiédos, though brave, fell under the enemy’s bullet. The invader is stronger than us—I acknowledge—but should we give away Waalo to foreigners?”

She was defeated in 1855 and Waalo became a French colony, 5 years later, she died. Queen Ndate Yalla’s son, Prince Sidya Ndatte Yalla Diop, was also captured by Governor Faidherbe and renamed Leon. He would later be sent to a French school in Saint Louis and later on to Algiers where they tried to tame him into becoming a colonial representative. However, Sidya Diop at 17 years old, returned back to his homeland, rejected his French name, language, and outfits and took up his mother’s legacy.

Sidya Diop set up a large resistance movement and a very powerful army, he became a terror to the French occupation, causing them to record huge losses. He was on the verge of setting up a national freedom movement when he was betrayed and apprehended by the French after some really fierce brawls, later to be exiled to Gabon. Prince Sidya Diop, out of despair from never returning to his homeland, committed suicide at age 30.

Prince Sidya Ndate Yalla Diop, like his mother, Queen Ndate Yalla, remains one of Africa’s finest heroes who fought against the colonial occupation of Senegal with all that they had.

Conclusion:
We owe it to our ancestors and people to celebrate people such as Queen Ndate Yalla Mbodj and their achievements. What we have realized is that the European and American curriculums which are used all over the world, do their best to hide our Black Heroes. That is why we at Liberty Writers Africa are passionate about our history – we tell the good and bad stories of our history so that our people now and in the future will know their journey through time.