PAXTON AND SLAVERY IN THE CARIBBEAN 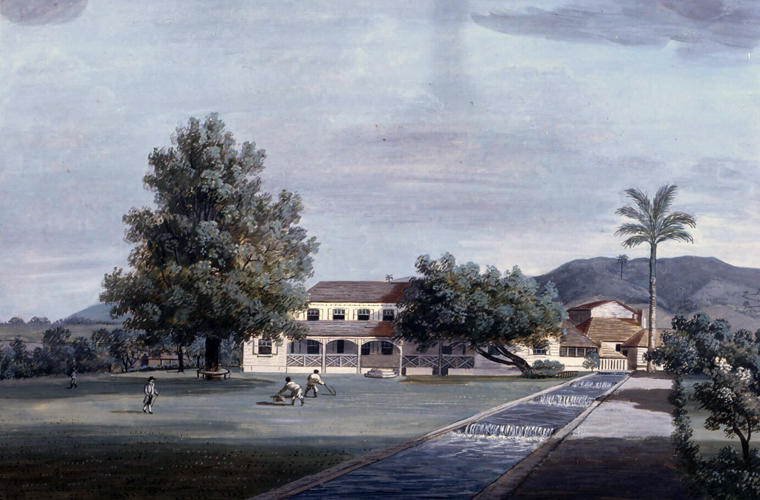 CARIBBEAN CONNECTIONS AND SLAVERY
Ninian Home (1732-1795) was a cousin of Patrick Home, who built Paxton House. As a junior member of the family, Ninian had to earn his living. First, in 1749, he was sent from Scotland to his uncle George Home (1698-1760), who had been transported to Virginia following imprisonment after the 1715 Jacobite Uprising. George lived in Culpeper County, Virginia, and Ninian was to ‘keep his master’s store’. George, as a land surveyor, knew many plantation and slave owners, including George Washington.

Ninian spent much of his career in the Caribbean, though he returned to Scotland several times. Ninian worked on St Kitts (1756-59), and became involved in shipping cargo around the Caribbean, possibly including slaves. He had joint shares in several ships.

Ninian went to Grenada immediately after this French colony was ceded to Britain under the Treaty of Paris of 1763. He married Penelope Payne, probably a British planter’s daughter, sometime before 1770. They had no children, and she died in Grenada on 30th September 1794. 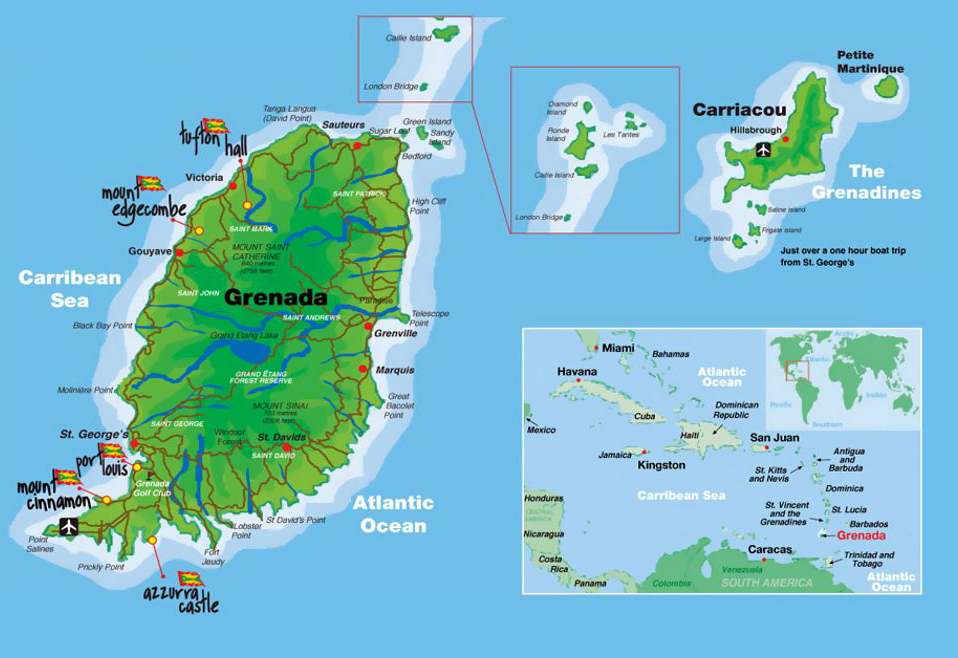 GRENADIAN PLANTATIONS
In 1764, Ninian bought the 400-acre plantation of Waltham on the northwest coast of Grenada with a huge mortgage of £17,000 – very little of which he actually paid back. The terms of the mortgage compelled him to sell all products through an agent who deducted charges, interest, and repayment installments, leaving any profit balance for Ninian. (This mortgage was not cleared until 1836 by his heirs). He also bought a third share of Paraclete plantation (100 acres), with his cousin and uncle Patrick Home acquiring another third of this (for £4,747 9s 5d). Patrick sold his share in 1770. Paraclete is near the east coast of Grenada in St Andrews Parish.

By 1789, Ninian had over 200 enslaved people on Waltham, the oldest of whom was 90-year-old Agatha, and the youngest, named Bristol, was only two months old; children were born into slavery and like their parents, were the property of their master. In total, Ninian ‘owned’ around 400 enslaved people; archives detail their first names, ages, occupations, and any illnesses.

Crops grown on the plantations were sugar, cocoa, nutmeg, and other spices. Although Ninian’s income fluctuated due to diseases, storms damaging crops (1780, 1786, and 1787 crops were wiped out by hurricanes), market forces, and produce being lost in shipwrecks whilst being transported to market, he was still able to make profits and to acquire Paxton house for £12,000 in 1773 from his uncle Patrick. (Ninian purchased Paxton by borrowing £10,000).

During Ninian’s residence in Grenada, he held various posts in the government which brought in some income. Eventually, after much campaigning on his behalf by both Patrick and George Home, Ninian was appointed Governor of Grenada in late 1792.

TREATMENT OF ENSLAVED PEOPLE BY NINIAN HOME
Archive documents suggest that Ninian was concerned about the welfare of slaves on his plantations. He provided a Scottish-trained doctor to treat their illnesses or injuries; pregnant slaves were allowed to stop work for a short period prior to and after their baby was born. Surviving letters show that slaves were allocated small gardens to cultivate food for themselves and were allowed to sell any excess at the market. This food production meant slave owners were less reliant upon imports (such as oats and salted herring from Scotland).

In general, slave owners and managers treated enslaved people notoriously harshly. One manager, Ninian Jaffray, appointed when Dr. Bell was a deputy for Ninian at Waltham turned out to be abusive and cruel and Ninian wrote to him:
Ninian may have been influenced by the Scottish Enlightenment “sense of humanity”, but no doubt he was also influenced by the idea that healthier and more cooperative slaves would improve his profits.

Ninian was heavily invested in the slavery system and campaigned against the abolition of the slave trade. He wrote repeatedly to his uncle Patrick Home, then MP for Berwickshire, to vote against abolition.

DEATH OF NINIAN IN THE UPRISING OF 1795 ON GRENADA
Grenada had been a French colony until 1763 and French control was temporarily restored from 5 July 1779-3 Sept 1783. Under British colonial rule, several estates remained in French ownership. The ongoing conflict between Britain and France caused friction between French (Roman Catholic) planters; their British (Protestant) neighbors; and the British colonial authorities. White French proprietors freed people of color, and many enslaved people were hostile to the British.

In 1789, ‘The Declaration of the Rights of Man and Citizen in France led to French citizenship being granted to freed people and emancipation of enslaved people in French Caribbean territories. The news of this spread and inspired unrest for those seeking freedom. In March 1795, Julien Fédon led an uprising on Grenada against the British authorities and British planters. Fédon was the son of a Frenchman and a freed black woman and owned the 360-acre Belvedere estate and 96 slaves.

The uprising lasted around a year and caused devastation to the island and its economy. Around 7000 enslaved people were killed in the fighting, or in retaliation for their insurrection, and many others were deported. Ninian Home was captured by the rebels in early March 1795 and held for a month in a well-defended camp on Mount Qua-Qua, above Belvedere estate. After Fédon’s brother was killed by the British, Fédon ordered the killing of 48 of the 51 captives (Governor Ninian Home, Alexander Campbell, and other white planters and British sailors). They were shot and their bodies mutilated; Ninian was the last to be killed on 8th April 1795. A Scottish doctor, Dr. John Hay, a minister, and one other man were spared. 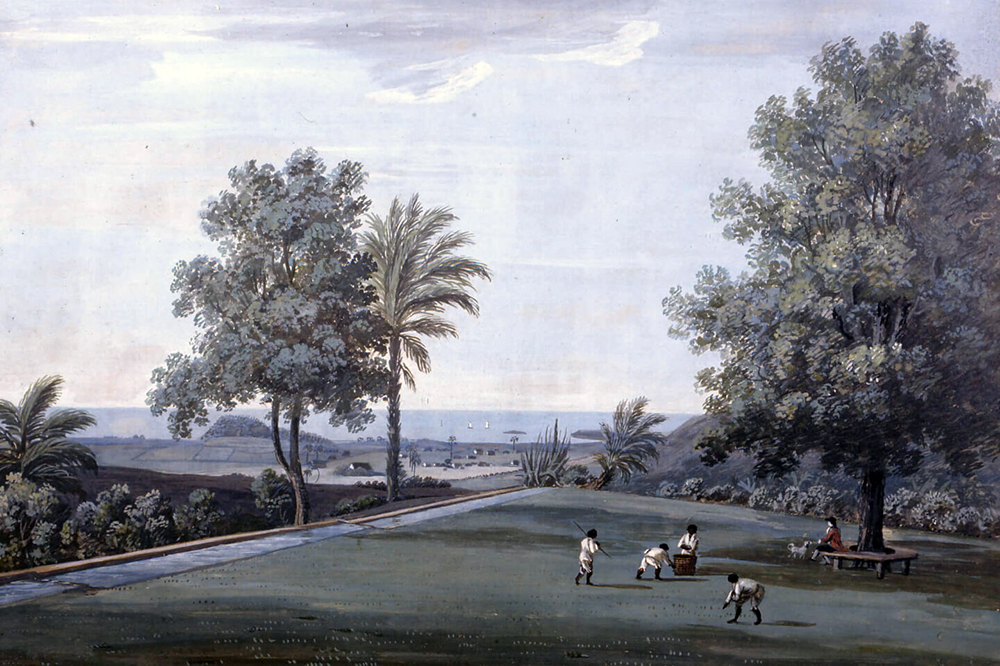 GRENADIAN PLANTATIONS FROM 1796
After Ninian’s death, the plantations passed to George Home, Ninian’s younger brother, who never visited Grenada. From c.1796/7, George Home, sent money to repair and reinstate part of the plantations that were damaged during the uprising. George was an Edinburgh-based lawyer and from 1781-1806 was Clerk to the Court of Session. George retained ownership of the estates as an absentee landlord using agents to manage them. It appears that the plantations and Ninian’s huge debts were a substantial drain on George’s Scottish-based income. He chose not to dispose of them. He may have hoped that they might eventually turn profitable, despite the Act to Abolish the Slave Trade, which was passed in Britain on 25 March 1807. This Act did not prevent the continuation of slavery in British colonies.

George died in 1820. After his death, the estates in Scotland and Grenada were inherited by William Foreman Home, whose brother John, had qualified as a doctor in Scotland in 1800/01. John went to work in Grenada in 1801 as the estate doctor at Waltham for £100/year for three years. Aside from treating any illnesses and injuries, John also inoculated the slaves against smallpox and cared for the ‘old and infirm.

George Home frequently wrote to John Foreman Home asking how the enslaved people were. For instance, George stated that the pregnant; ‘ladies… should have every reasonable comfort their situation admits of…’ (13 Sept 1801). That same month, George was pleased to hear of improved sugar crops at Waltham obtained without injury to the enslaved, adding; ‘I should feel regret if it had occasioned the negroes to be overworked, which I hope they never will be.’ What was classed as ‘overworked’ is a matter of debate.

The ‘proper’ care of the old and infirm and indeed all the enslaved people also featured in the letters from George to his estate manager, John Fairbairn, at Waltham (in the post from February 1798 until c.1819). George’s concerns were, mainly, driven by commercial considerations. In 1813-14 an outbreak of whooping cough caused the deaths of at least three enslaved children. An overseer at Waltham, Adam Black from Duns, Scotland, was sent home in 1815, as John Fairbairn would not allow him to ‘flog or ill use’ slaves. Black had five children by enslaved women, all of whom were left behind on the estate when he left.

In 1815, the debts on the Waltham estate stood at £24,183, comprising the mortgage, interest arrears, and debts to another person; this was a reduction of around £3000 on the previous year, so the estate was in profit. In 1816, William Wilberforce was proposing legislation to prevent British planters from purchasing further enslaved people from nations still engaged in the transport of slaves (the Spaniards, Portuguese, Americans, or others). Research is currently being conducted on what exactly happened to the part-share of the Paraclete plantation, but it appears to have been heavily mortgaged and sold by 1817 at the latest. Paraclete appears to have been abandoned following the uprising of 1795-96.

The naval career of another Paxton personality, Admiral David Milne, spanned the final years of the slave trade and the start of abolition. As a young sailor in the 1790s, he fought for British control of the Caribbean while the Royal Navy was still protecting slave traders. In 1816 he had a prominent role in the Battle of Algiers, which stopped the enslavement of Europeans by the Barbary corsairs. Finally, as the Royal Navy’s commander of the North American station after the abolition of the slave trade, he organized the interception of slave ships and the return of their victims to Africa. His son married Jean Home, heiress to Paxton, in 1832. 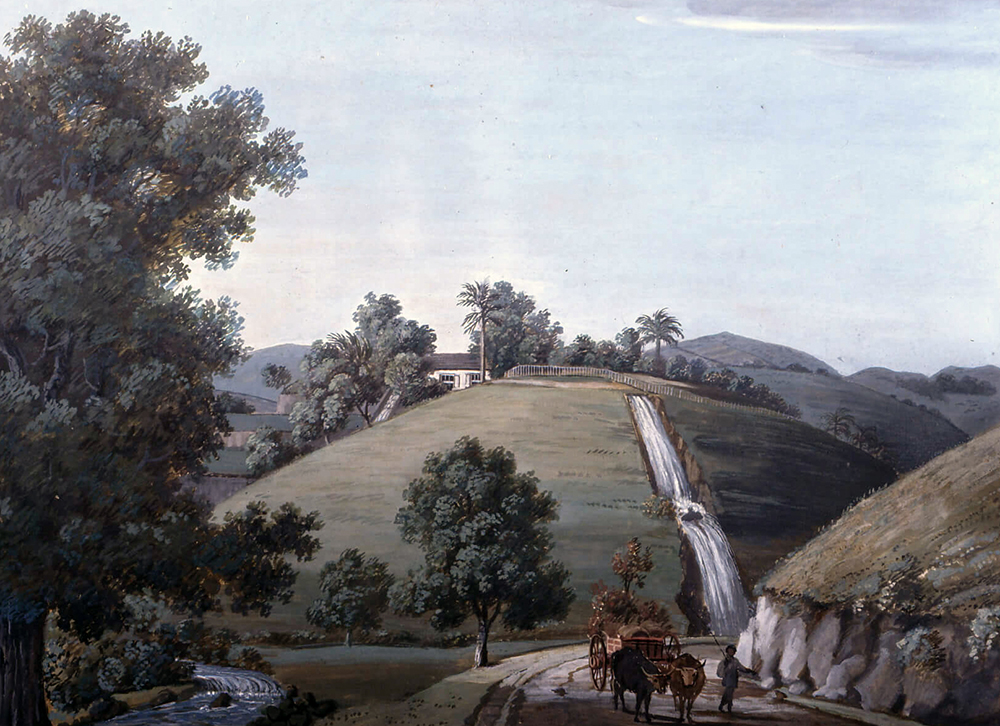 THE CAMPAIGN FOR ABOLITION
Many enslaved people tried to fight against their situation with both small and greater acts of resistance and defiance. Some tried to run away temporarily or permanently (this was much harder to do on the islands). Uprisings were common in the Caribbean, particularly on the islands where enslaved people greatly outnumbered whites, but where treatment was harsher and more brutal. The ruling elite saw these events as acts of rebellion to be crushed, inflicting dreadful punishments, death, and reprisals. For the enslaved and their descendants, as well as those fighting for their cause, such as the Abolitionists in Britain, these were viewed as acts of resistance to gain their freedom from bondage. Throughout the diaspora today these brave people (including Fédon) are regarded as and celebrated as freedom fighters. Mary Prince (b.1787/8), who had been enslaved in Bermuda, Grand Turk, and Antigua, wrote in 1831: “All slaves want to be free – to be free is very sweet…The man that says slaves be quite happy in slavery—that they don’t want to be free—that man is either ignorant or a lying person. I never heard a slave say so.”

Slavery was abolished in the British Empire in 1834, but in most cases, the enslaved people had to work a further four years as ‘apprentices’ on British-owned plantations, only then did they become free people. In 1835, a claim from William Foreman Home, as proprietor and owner-in-fee were made to the British Government’s Slave Compensation Commission for the Waltham estate which had, at that point, 247 enslaved people. He was awarded £6,226.16/- on 2nd Nov 1835. This money was used in part (to what extent is not known yet) to clear the remaining mortgage on Waltham. In today’s money, using the Bank of England’s inflation calculator, the equivalent sum awarded would be £808,906. The claim made for Paraclete was not awarded to the Home family, but to the mortgagee instead. Waltham estate was advertised for sale in 1844. It was bought by George Walker of St Vincent for £2,500 in 1848. 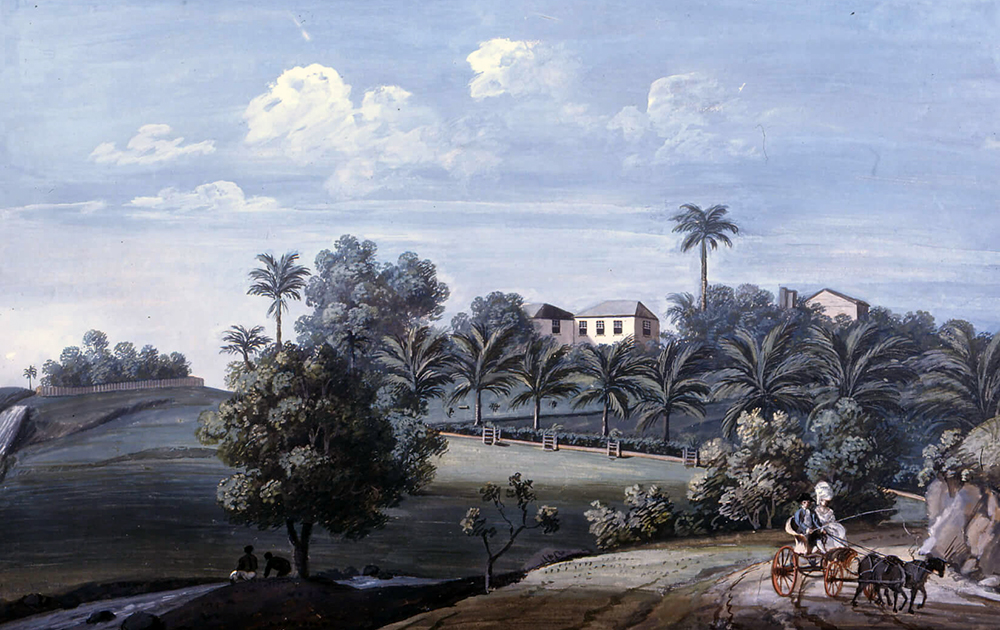 This text has been compiled by Dr. Fiona Salvesen Murrell and John Home Robertson with the advice of Chantel Noel and Benjamin Busenze of Descendants https://www.descendants.org.uk/. We are extremely grateful to Chantel and Benjamin for their guidance.

The sources used include original archives on loan to the National Records of Scotland, transcripts of the archives, and summaries of the archives compiled by Hazel Anderson formerly of the NRS. Dr. Sonia Baker shared her archival research on Ninian Home with The Paxton Trust c.2010.

Whatever you do!! ... See MoreSee Less