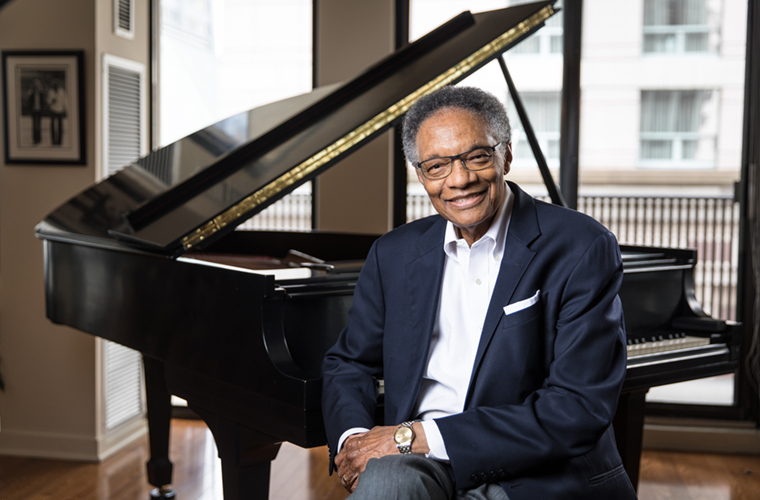 World-famous jazz musician and composer Ramsey Emmanuel Lewis, Jr. was first given piano lessons at age four. He was born in Chicago on May 27, 1935, to hard-working, self-educated Southern farm workers who met in church.

Lewis attended Chicago Music College Preparatory School from 1947 to 1954. He credits his music teacher, Dorothy Mendelsohn, with teaching him how to listen with his inner ear. Other than his father’s Duke Ellington, Art Tatham, and Mead Lux Lewis records, Lewis had no special exposure to jazz. After graduating from Wells High School in 1954, Lewis’ first music job was as an accompanist at the Zion Hill Baptist Church. He enrolled in Chicago Music College but left at age eighteen to marry. In 1956, he formed the Ramsey Lewis Jazz Trio and signed with Chess Records in 1957 for the Trio’s first album. The Trio, composed of Eldee Young and Red Holt, played in famous New York jazz clubs and toured as full-time jazz musicians. Lewis recorded for Columbia Records from 1971 to 1974 and signed with GRP Records in 1991. He is the winner of three Grammy Awards, and from 1967 to 1976 earned five gold records. His major hits include “The In Crowd,” “Wade in the Water” and “Hang On Sloopy.”

Since 1957, Lewis has performed concerts in all the major clubs, jazz festivals, and summer venues in the United States and with more than twenty-five symphony orchestras. He has a daily radio show, The Ramsey Lewis Morning Show in Chicago, and a weekly syndicated jazz show. From 1990 to 1999, he hosted BET’s Jazz Central. He was named artistic director of the Ravinia Jazz Festival in 1992.

Lewis is on the board of the Merit Music Program, which provides free music lessons to youth; Cycle, an inner-city self-help high school program; and the Ravinia Mentor Program. He serves as honorary chairman of the Cares for Kids Foundation. He was named 2000’s Radio Personality of the Year.

Residing in Chicago, Lewis has been married to Janet Tamillow Lewis since 1990 and is the father of seven children, grandfather of twelve, and great-grandfather of one.