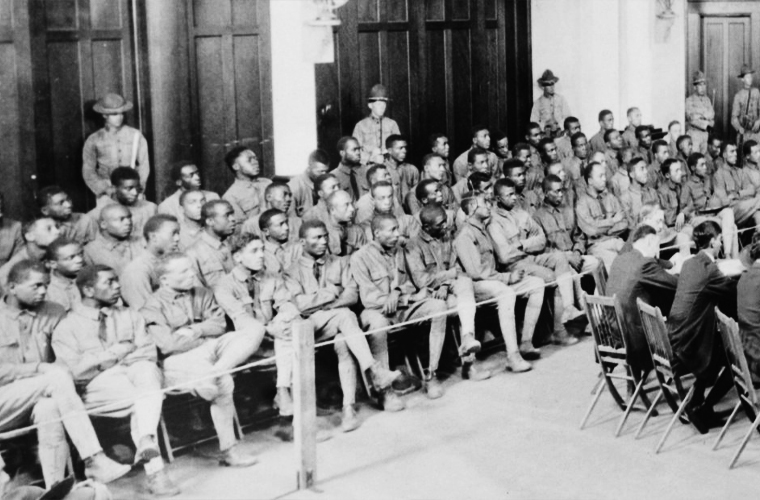 Houston marked an anniversary in December that some in the city would perhaps rather forget — and others demand be recalled more clearly.

On Dec. 11, 1917, 13 black soldiers were hanged for their part in a little-remembered and deadly race riot. They were condemned to death after a trial many called unjust.

Now, at a moment when the continuing impact of racism in policing and criminal justice is a topic of fraught public conversation throughout the United States, relatives on both sides of that Houston riot are uniting to preserve the memory of the event and to find some justice for those executed soldiers. 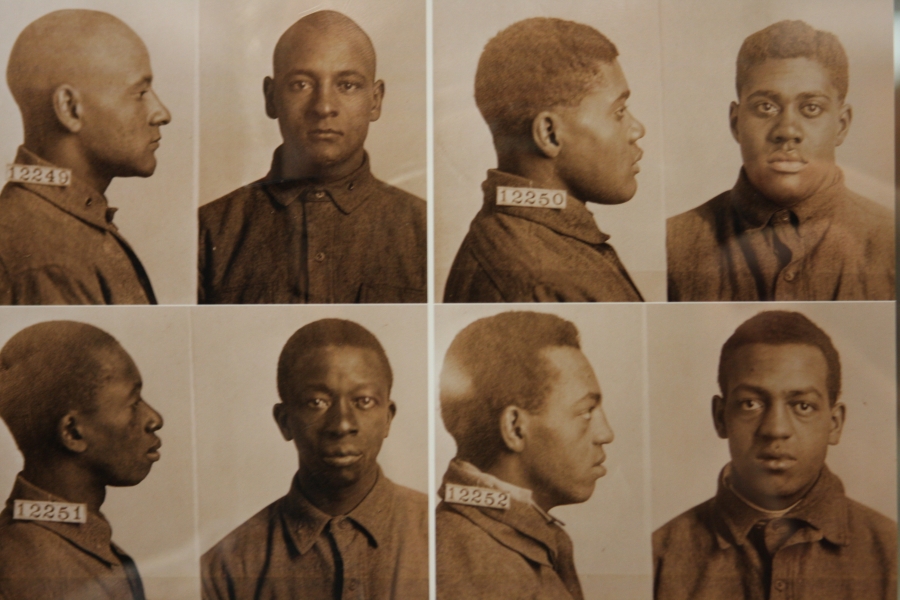 It began in July 1917, following America declaring war on Germany and entering World War I. The 3rd Battalion of the 24th United States Infantry, a predominantly black unit, was sent to guard the construction of Camp Logan — part of the new war effort — on the edge of Houston.

From the beginning, the soldiers encountered Jim Crow law and racism from police and civilians; workers constructing the camp resented their presence.

“They sent these soldiers into the most hostile environment imaginable,” says Charles Anderson, a relative of Sgt. William Nesbit, one of the hanged soldiers. “The soldiers should never have been sent there — they should have remained at their base in New Mexico until the order came to go to France.”

Tensions mounted until around noon on Aug. 23, when the Houston police arrested a black soldier for allegedly interfering in the arrest of a black woman, triggering a rapid escalation of events leading to false rumors reaching Camp Logan by evening that a soldier had been killed and that a white mob was approaching the camp. 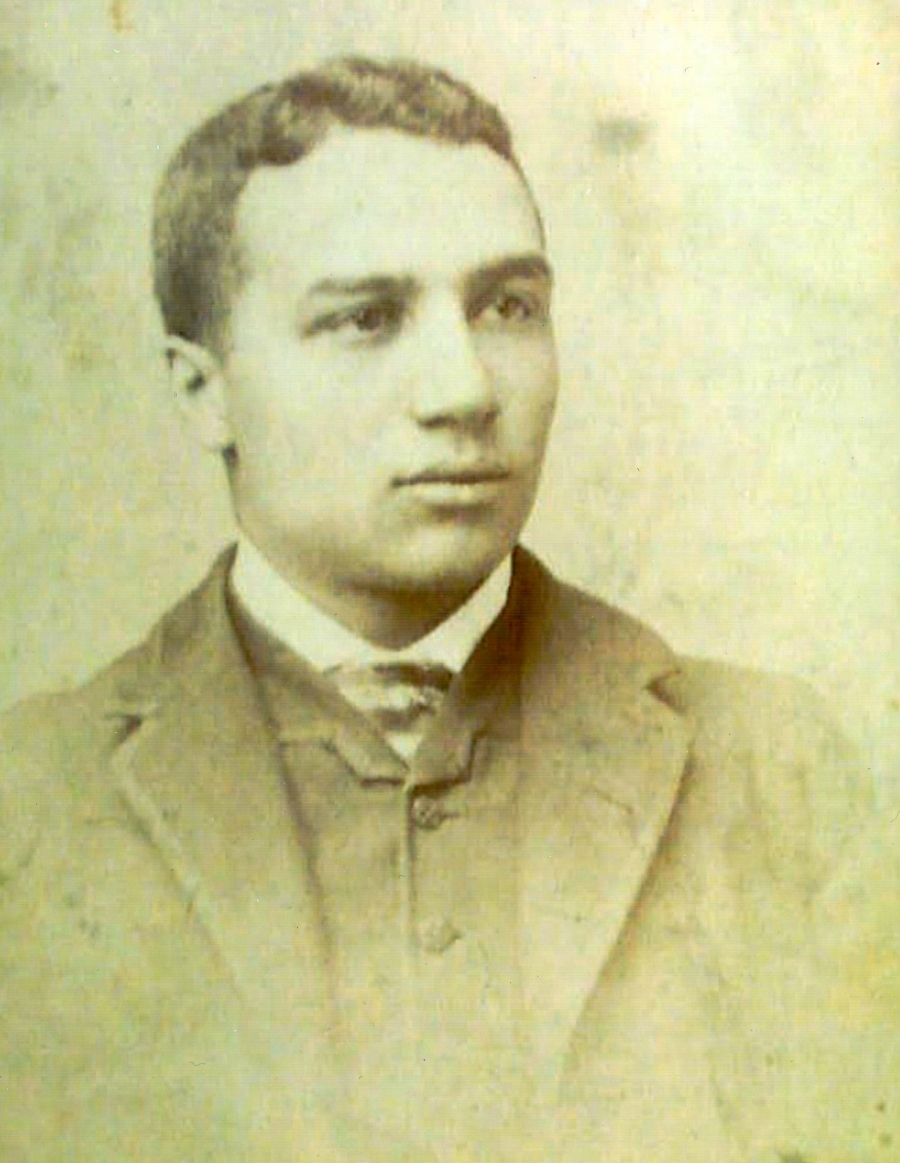 Sgt. William Nesbit, one of the hanged soldiers, as a young man.

Soldiers grabbed rifles and headed into downtown Houston, against the orders of their superior officers. The rampage lasted two hours and involved gun battles between the soldiers and the police and local residents, with bayonets being used, leaving 16 white locals dead, including five policemen. Four black soldiers also died.

After tempers finally cooled, the soldiers returned to camp. The next day martial law was declared in Houston, and the following day the unit was dispatched back to New Mexico before three courts-martial were convened to try 118 indicted soldiers.

Sixty-four men were tried in San Antonio, charged with disobeying orders, mutiny, murder, and aggravated assault, during the first court-martial that began Nov. 1 — the largest murder trial in US military history —resulting in the 13 death sentences.

“They were represented by just one lawyer and didn’t even have a chance to appeal,” says Angela Holder, great-niece of Cpl. Jesse Moore, one of the hanged soldiers, and a history professor at Houston Community College. “They were denied due process guaranteed by the Constitution.”

Not one Houstonian among the prosecution witnesses could identify a soldier as having fired shots that killed someone, while routinely referring to the accused using the n-word. Seven soldiers agreed to testify against the others in exchange for clemency.

On Nov. 28, the 13 men were found guilty and sentenced to death. Two weeks later, without an appeal, they were hanged on Dec. 11. 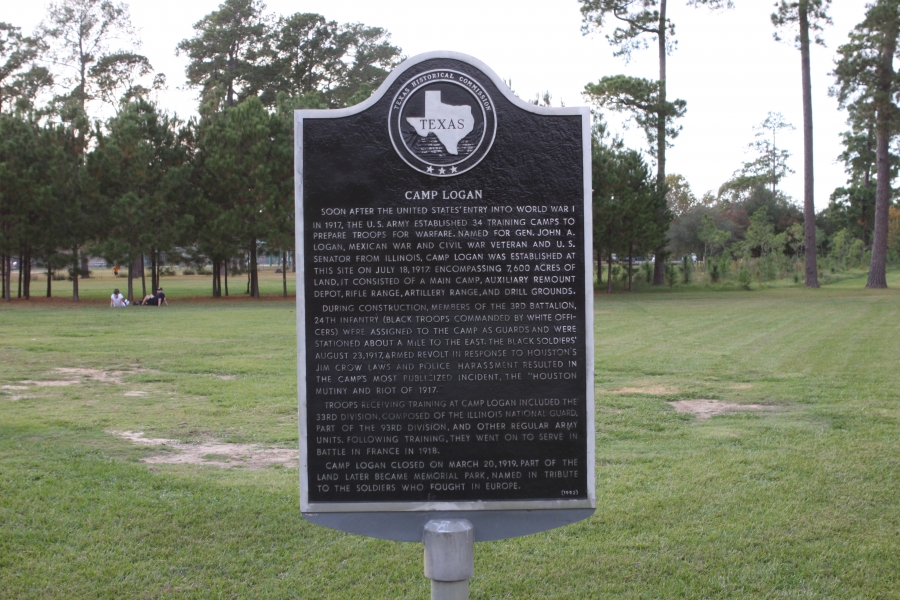 The historical marker at the former location of Camp Logan in Houston, Texas.

Shortly after the hasty executions, and in the face of condemnation from both military and civilian figures, the US Army made changes to its Uniform Code of Military Justice to prevent executions without a meaningful appeal. These changes remain in place to this day.

It was too late for the soldiers hanged from a scaffold beside the Salado Creek in San Antonio. But some in Houston says it’s not too late for some kind of justice. During the Obama presidency, soldiers’ relatives lobbied — unsuccessfully — for posthumous pardons. The petitions have now been sent to the Trump White House. 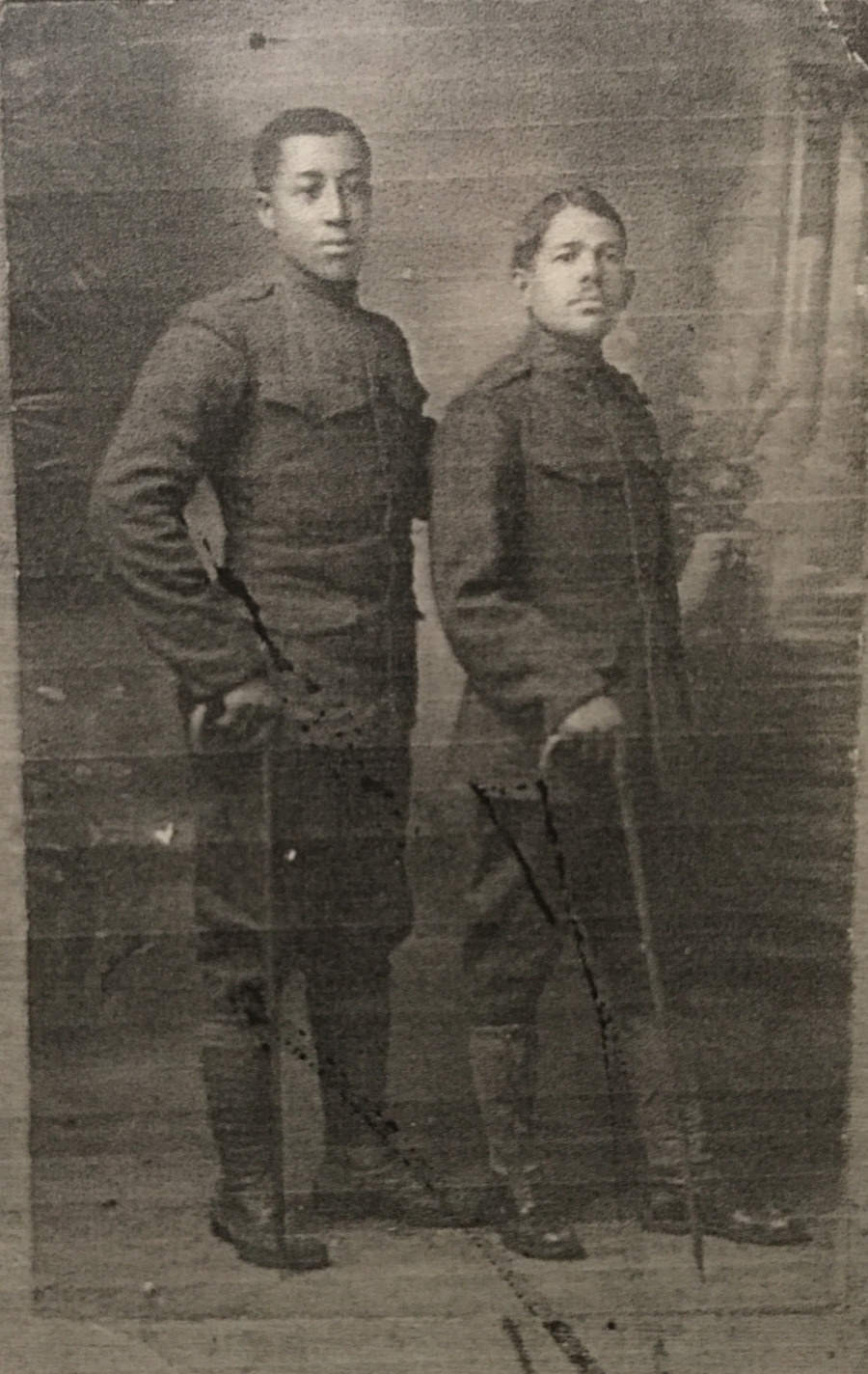 Cpl. Jesse Moore, right, was among the 13 soldiers hanged.

Holder was more successful in 2017 at lobbying the Veterans Association for gravestones in a Houston cemetery for two soldiers killed during the riot. And along with other local activists, she also helped organize the Aug. 23 rededication of a Texas Historical Commission marker at the former site of Camp Logan to mark the riot’s 100th anniversary.

The ceremony was attended by Houston Mayor Sylvester Turner, who said the history of the event is “calling us today to be better,” and “for good people of all backgrounds to speak against hate and stand united.”

And it wasn’t the only 100th anniversary to help focus the minds of those familiar with the riot on the past, present and future.

“The centennial of the US entry into World War I has likely brought a heightened awareness of such events and emboldened people to address a sensitive topic,” says Lila Rakoczy, program coordinator of military sites and oral history programs at the Texas Historical Commission.

“This was a problem created by community policing in a hostile environment,” says Paul Matthews, founder of Houston’s Buffalo Soldiers National Museum, which examines the role of African American soldiers during US military history. “The soldiers were standing up for America when it wasn’t standing up for them.”

In 2017, two new headstones were placed at graves in Houston’s College Memorial Park Cemetery for two soldiers killed during the riot. The graves had previously been unmarked.

A similar perspective is shared by some relatives of those who suffered because of the rioting soldiers.

“The soldiers were 100 percent wrong for rioting, but I don’t blame them,” says Jules James, great-nephew of Capt. Bartlett James, one of the battalion’s white officers who managed to restrain a larger number of soldiers from leaving camp but died under mysterious circumstances before the court-martial, notes James, who has researched the history. “The unit had 60 years of excellent service, was full of experienced veterans but couldn’t endure seven weeks of Houston.”

Current attempts to deal with this racial tragedy brought Sandra Hajtman, great-granddaughter of one of the policemen killed, together with Holder and Anderson when they met to retrace the Houston streets taken by the rioting soldiers. 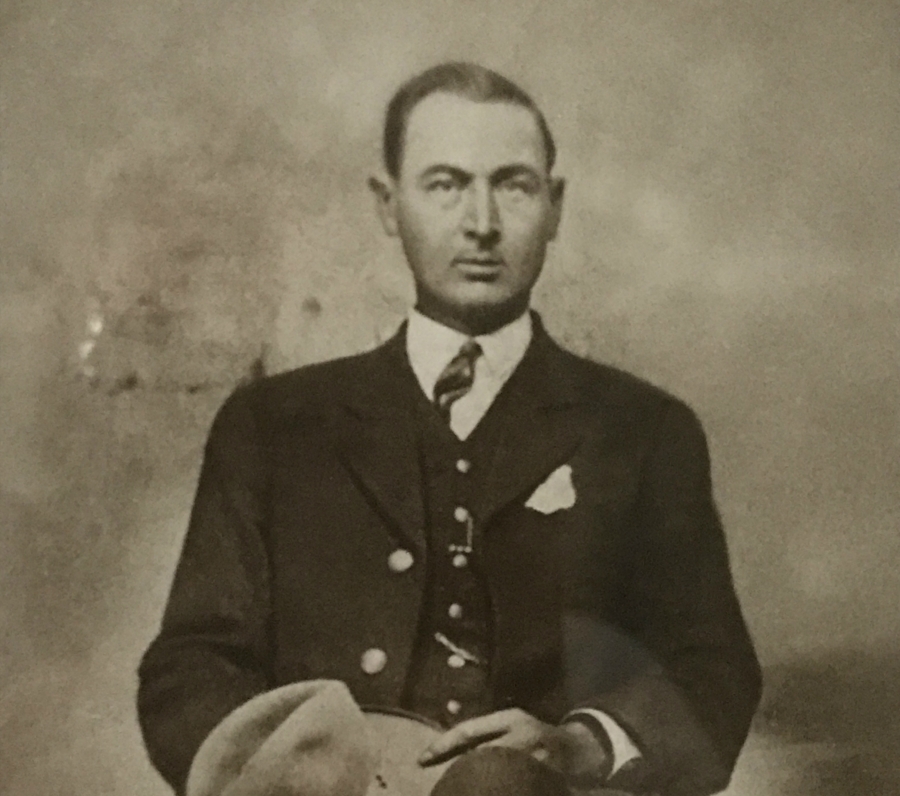 Ira Raney was one of the policemen killed during the riot.

“The men did not have a fair trial,” Hajtman says. “I have no doubt about the likelihood the men executed had nothing to do with the deaths. You have to look at the whole story, why it happened, and learn from it — both sides bear responsibility.”

Relatives continue waiting for a response to the pardon petitions. In the meantime, preserving the memory of the Houston riot and its aftermath has itself served as a kind of justice for the relatives of the soldiers and police who died because of it.

‘’Sandra Hajtman’s ancestor, who was killed, was a good policeman and would bring abandoned black children to his home where his wife would nurse them,” Anderson says. “No one should have lost their lives that night had the right decisions been made. It was a very sad tragedy that did not need to happen.”