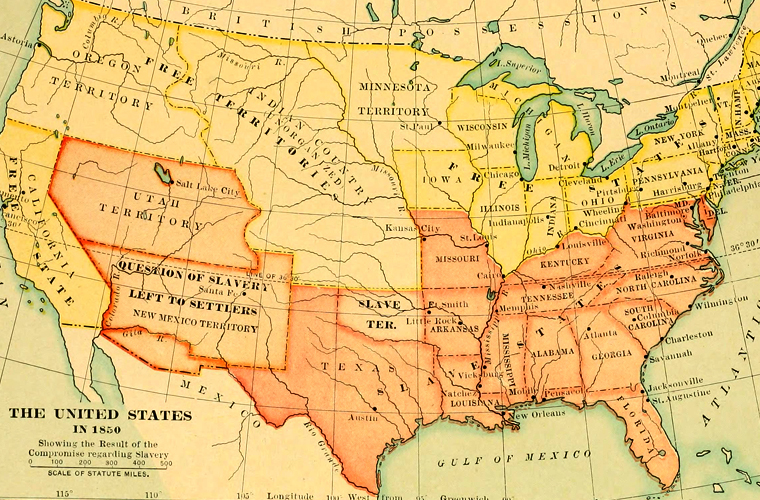 The Compromise of 1850 was a set of bills passed in Congress which tried to settle the issue of slavery, which was about to split the nation. The legislation was highly controversial and it was only passed after a long series of battles on Capitol Hill. It was destined to be unpopular, as just about every part of the nation found something to dislike about its provisions. Yet the Compromise of 1850 served its purpose. For a time it kept the Union from splitting, and it essentially delayed the outbreak of the Civil War for a decade.

The Mexican War Led to the Compromise of 1850
As the Mexican War ended in 1848, vast stretches of land acquired from Mexico were going to be added to the United States as new territories or states. Once again, the issue of slavery came to the forefront of American political life. Would new states and territories be free states or slave states?

President Zachary Taylor wanted California admitted as a free state, and wanted New Mexico and Utah admitted as territories which excluded slavery under their territorial constitutions. Politicians from the South objected, claiming that admitting California would upset the balance between slave and free states and would split the Union. On Capitol Hill, some familiar and formidable characters, including Henry Clay, Daniel Webster, and John C. Calhoun, began trying to hammer out some sort of compromise. Thirty years earlier, in 1820, the U.S. Congress, largely at the direction of Clay, had tried to settle similar questions about slavery with the Missouri Compromise. It was hoped that something similar could be achieved to lessen tensions and avoid a sectional conflict.

The Compromise of 1850 Was an Omnibus Bill
Henry Clay, who had come out of retirement and was serving as a senator from Kentucky, put together a group of five separate bills as an “omnibus bill” which became known as the Compromise of 1850. Proposed legislation put together by Clay would admit California as a free state; allow New Mexico to decide whether to be a free state or slave state; enact a strong fugitive slave law, and preserve slavery in the District of Columbia. Clay tried to get the Congress to consider the issues in one general bill, but couldn’t get the votes to pass it. Senator Stephen Douglas became involved and essentially took the bill apart into its separate components and was able to get each bill through Congress.

One particular part of the compromise, the stronger Fugitive Slave Act, was almost immediately a cause of great controversy. The bill intensified the hunting of slaves who had made it to free territory. And it led, for example, to the Christiana Riot, an incident in rural Pennsylvania in September 1851 in which a Maryland farmer was killed while trying to apprehend slaves who had escaped from his estate.

The Kansas-Nebraska Act, legislation guided through Congress by Senator Stephen Douglas only four years later, would prove even more controversial. Provisions in the Kansas-Nebraska Act were widely disliked as they repealed the venerable Missouri Compromise. The new legislation led to violence in Kansas, which was dubbed “Bleeding Kansas” by the legendary newspaper editor Horace Greeley.

The Kansas-Nebraska Act also inspired Abraham Lincoln to become involved in politics again, and his debates with Stephen Douglas in 1858 set the stage for his run for the White House.

And, of course, the election of Abraham Lincoln in 1860 would inflame passions in the South and lead to the secession crisis and the American Civil War.

The Compromise of 1850 may have delayed the splitting of the Union many Americans feared, but it couldn’t prevent it forever.