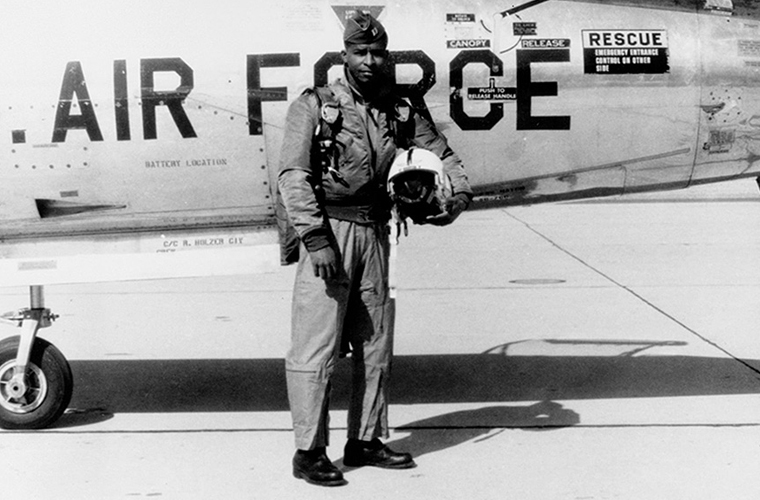 Robert Henry Lawrence, Jr., was the first African American selected to be an astronaut.  He was also a test pilot and senior the United States Air Force pilot with over 2,500 flight hours.

Born in Chicago, Illinois on October 2, 1935, Robert Henry Lawrence, Jr. graduated from Englewood High School in Chicago in the top 10 percent of his class. In 1956 he graduated from Bradley University with a B.A. in Chemistry. While in college he enlisted in the Reserve Officers’ Training Corps (ROTC) and distinguished himself, receiving the commission of Second Lieutenant in the Air Force Reserve Program.

In 1956 Lawrence completed flight training at Malden Air Force Base and was designated a U.S. Air Force pilot. Over the next decade, Lawrence accrued over 2,500 hours of flight time with 2,000 of those hours in jets. By age 25, Lawrence had completed an Air Force assignment as an instructor pilot for German Air Force trainees.

The Air Force later assigned Lawrence to flight test the recently developed Lockheed F-104 Starfighter. Lawrence investigated glide flight characteristics necessary for the design of unpowered spacecraft returning to Earth from orbit. NASA cited Lawrence for his accomplishments including the crucial flight maneuver data that in the agency’s words, “contributed greatly to the development of the Space Shuttle.”  While still in the Air Force, Lawrence earned a Ph.D. in Chemistry from Ohio State University in 1965.

Just six months later, in December of 1967, Lawrence was the backseat passenger flying as in instructor to a student pilot learning the steep descent glide technique. The pilot flying the F-104 made an approach to land but flared too late, causing the jet to crash. The pilot of the plane ejected successfully, however, by the time Lawrence ejected the plane had rolled onto its side and was on fire. Lawrence was killed instantly, leaving his wife Barbara and son Tracey. The Purple Heart was posthumously awarded to Lawrence.

On December 8, 1997, Robert Henry Lawrence, Jr.’s name was inscribed on the Space Mirror Memorial at the Kennedy Space Center in Florida. The Memorial was dedicated in 1991 to honor of all astronauts who have lost their lives on space missions or training for missions.