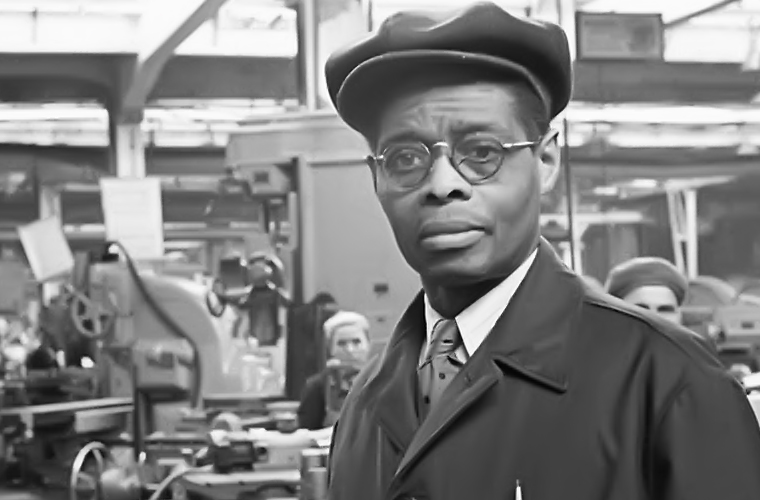 In July 1930, at a tractor factory in Stalingrad, a black American, Robert Robinson, quarreled with white US citizens: Lewis and Brown. These two (natives of the American South) insulted 24-year-old Robert for three consecutive weeks, saying that they did not want to be with the “black man” in the same workshop. Finally, Brown spat on the clothes of the “colored” compatriot, and Lewis got into a fight and hit the poor fellow several times in the face, shouting: “Damn monkey, get out of here while you are whole!” Robinson did not have time to answer: they were separated by Soviet guards. An enchanting scandal erupted. “The beating of a Negro worker in Stalingrad by the American worker Lewis caused general indignation in the Soviet public,” wrote the Izvestia newspaper. – The Central Committee of the Metalworkers’ Trade Union, after listening to the chairman of the factory committee, comrade. Lysov, stated that among the several hundred Americans invited to this plant, no cultural and educational work was carried out. Another newspaper, Trud, branded the perpetrators of the fight as “racists” and “fascists.”

Both were arrested. On August 20, a trial took place: Lewis and Brown were threatened with imprisonment under the article “Hooliganism”. Both escaped with a slight fright: each was given two years in a colony, but Lewis, as “infected with the vicious ideology of a capitalist society,” was expelled from the USSR, and Brown was amnestied and left to work in Stalingrad. Later, the affected African American recalled: “The Russians at the plant came up to me, shook hands, encouraged me, sympathized … In their eyes, I became a real hero, the personification of good that triumphed over evil. I was bombarded with letters from all over the USSR, and each contained an expression of support and sympathy. Robert Robinson lived in the Soviet Union for another 43 years and was even elected to the Moscow Council (!). However, the black worker did not like our country: he hated the climate, was afraid of women, and eventually returned to America.

Robert was born in 1906 in Jamaica. The father left the family, and the mother moved the boy to the United States when he was 6 years old. Both settled in Detroit. After graduation, the boy got a job at the Henry Ford car factory. River Rouge, making parts for cars. He was the only black man in the company, and he often heard swearing from his neighbors in the shop. Ford even wrote complaints: “What the hell are we working side by side with the damned Negro?” In 1930, a Soviet delegation visited the plant in Detroit, offering Robert and other employees a one-year contract to work in the USSR with free accommodation, housekeeper services, and a private car (!). Robinson immediately agreed since the Great Depression flourished in the United States at that time: economic recession, mass layoffs, and elementary famine. The desire to leave was also influenced by the case of a cousin of a friend of Robert, who was hanged by racists in the south of the United States as part of a lynching trial. In Detroit, an African American was paid 104 dollars a month, while in the USSR they were promised as much as 250!

Robinson was not the only “labor migrant”, then 362 US citizens moved to Stalingrad at once. “Guest workers” were placed in new houses, they bought food (with an excellent choice) in their store, dined in a separate restaurant, they even published a newspaper in English for them. But they didn’t provide cars or housekeepers, and in the end, they paid only $ 100 a month: another 150 were promised to be transferred to a bank account in the United States, but no one transferred them. Returning to America in 1933, Comrade Negro gave an interview to the Chicago Tribune newspaper, where he smashed the Stalin regime to smithereens: they say, they cheated with a car and a maid, they paid fewer bucks, working conditions are difficult, the weather is a nightmare, two Americans could not stand the cruel cold of the Volga, they died. 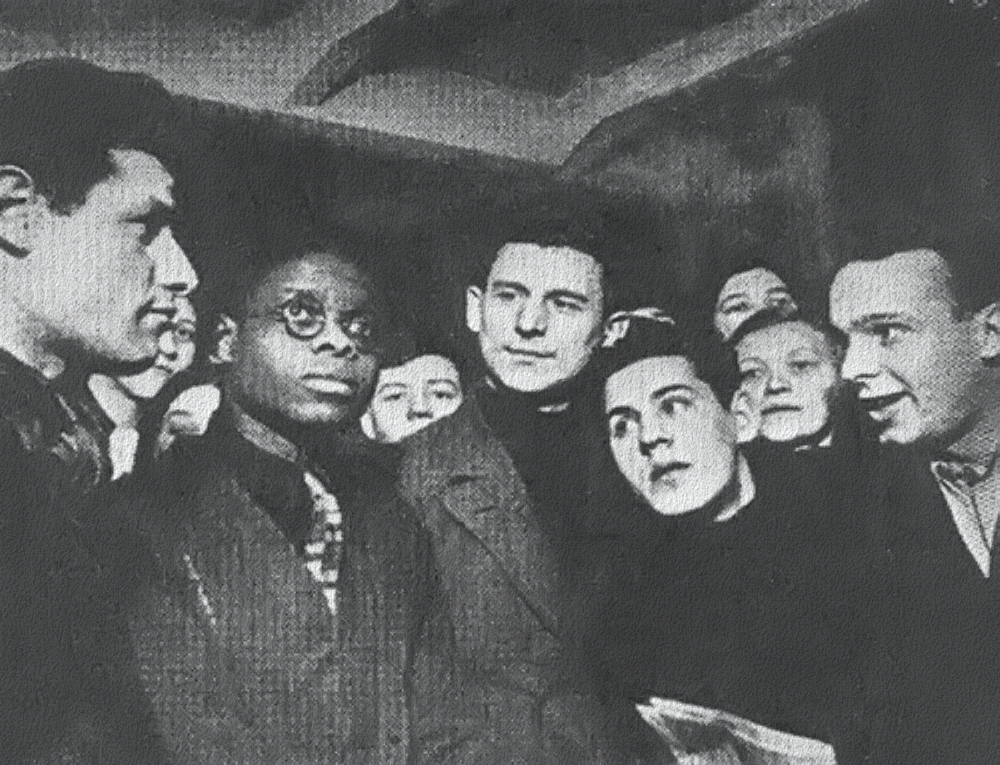 True, Robinson immediately had to go back: no one wanted to hire him because of a trip to Stalingrad. One of Ford’s managers said that “it is now not only black but also red.” The refugee arrived in Moscow, got a job at a ball-bearing factory, and suddenly made a political career: in 1934, Soviet work colleagues elected a colleague from America as a deputy of the Moscow Council. Robinson wrote in his diary that he was not pleased: “Why did they do it? Where am I? I do not approve of the communists and I believe in one Lord God!” He categorically refused the apartments, dachas, and cars that were supposed to be for the deputy.

Time magazine called the emigrant “black as coal, a puppet of Stalin.” In 1937, the US State Department demanded that Robinson return home or renounce American citizenship: he surrendered his American passport and officially became a citizen of the USSR. During the Stalinist repressions, many foreigners in the Soviet Union were accused of espionage and sent to camps, but this did not affect Robert. After the attack of Nazi Germany on the USSR in 1941, he was evacuated near Kuibyshev, where he caught a serious cold and almost died of starvation: he complained in his memoirs that on some days the only food for him was cabbage soup boiled in water from five to six pieces of cabbage. 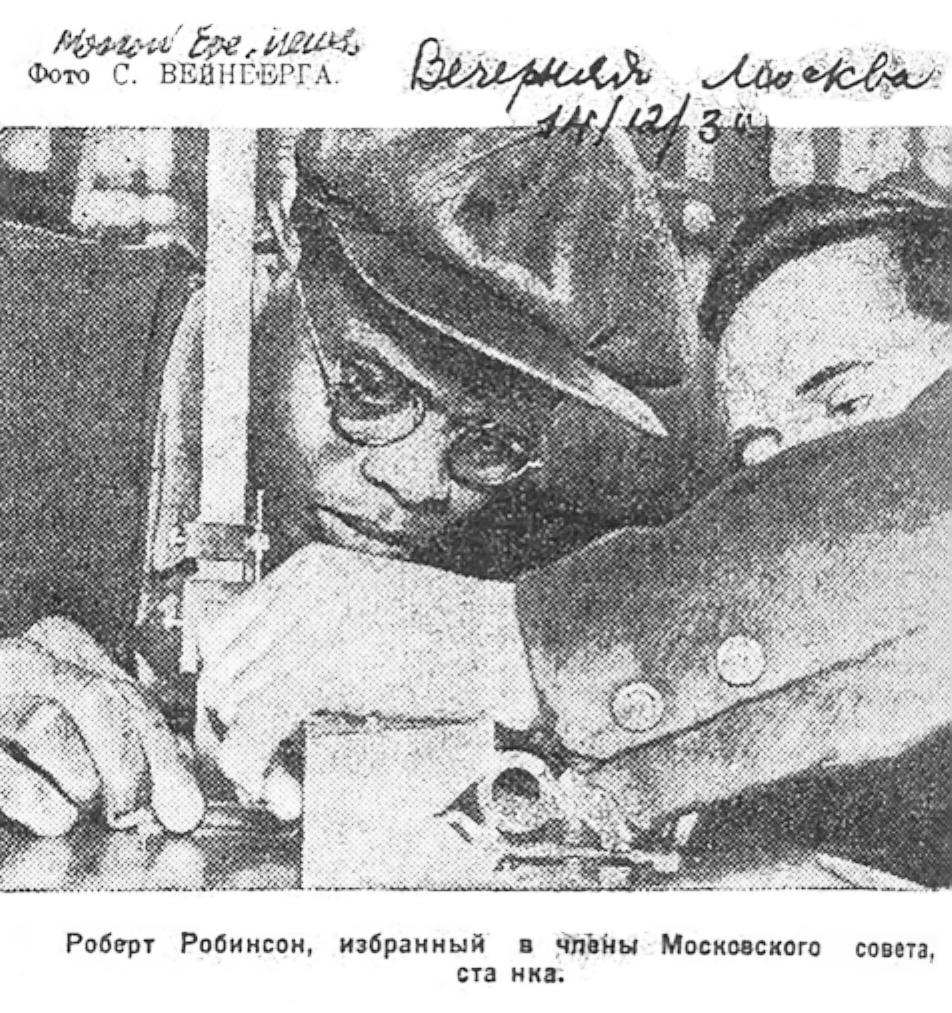 The African American was jarred by almost everything: icy winters, unsmiling Russians, and … hospitality. Once in the cold, the owners of the village house (in evacuation) offered him to stay on a warm stove, pretty much frightening the black man with such cordiality: “They did not understand my refusal, for the Soviet people, survival is more important than decency.” He was shocked by the attention of women: in every girl he saw an NKVD agent who wanted to drag a foreigner into bed, he dreamed of informers who reportedBeria about every step and every breath of the “black deputy”. When an acquaintance began to incite the American to a purely Russian tradition – to take the bearings out of the factory and drink them together – Robert refused in horror, seeing this as a provocation of the Chekists.

Robinson was especially annoyed by… racism in the USSR. He assured that Russians are even worse than white Americans: “Their racism is more violent, it burned my skin and flesh, it is a Kremlin myth that Soviet society is free from racism.” True, Robert did not give examples of his humiliation: in the USSR no one beat him (except for compatriots in Stalingrad), did not refuse to work together (as in the Henry Ford factory), and did not judge him by lynching. 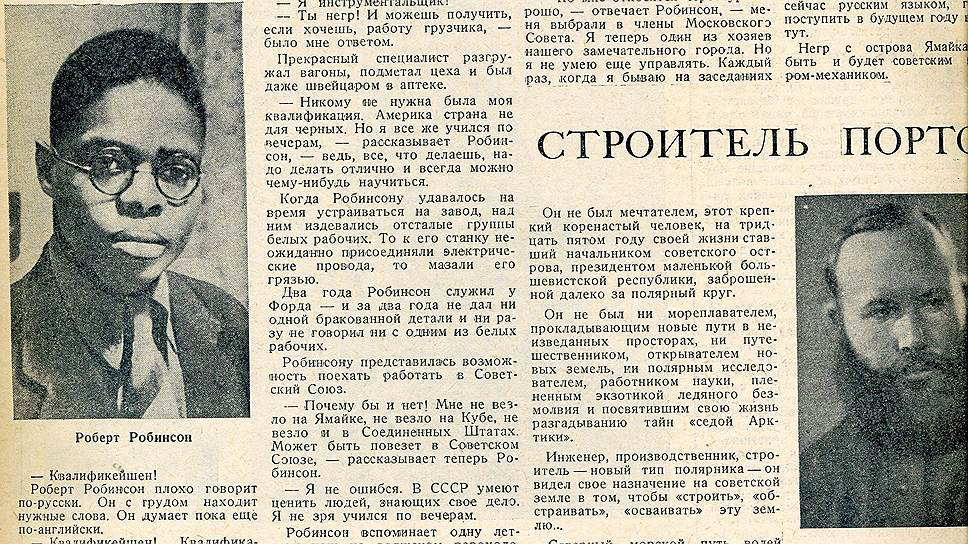 Moreover, in 1944, a black emigrant graduated from the Moscow Automotive Institute (evening department) and became an engineer with a significant salary increase, in 1947 he starred in the film “Miklukho-Maklai” as the Papuan Malu, and acted as a consultant for the Vakhtangov Theater when staging a play by American playwrights “Deep Roots”. Racism, of course, is just terrible. Nevertheless, every year after the war, Robinson stubbornly applied to leave the USSR, and he was constantly refused. The party leadership of the Soviet Union, it seems, was offended by the ingratitude of the “Negro worker”, who did not want to join the CPSU and tediously cursed everything around. Already under Brezhnev, in 1973, Robinson, with the help of the ambassador of Uganda, flew away as a tourist for a month to this African republic, and never returned back.