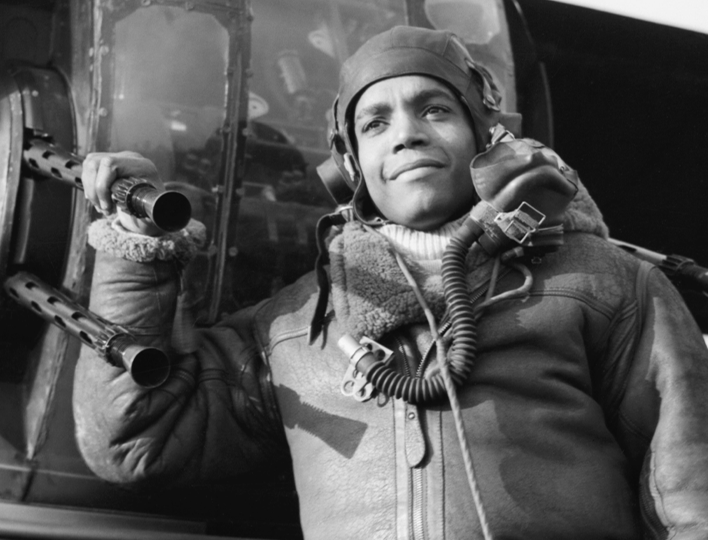 Sergeant Lincoln Orville Lynch DFM, a West Indian air gunner serving with RAF No 102 Squadron, photographed wearing his flying kit by the rear turret of his Halifax at RAF Pocklington, February 1944.
Lynch, from Jamaica, volunteered for service in the RAF in 1942, and in 1943 won the Air Gunner’s trophy for obtaining the highest percentage of his course during his training in Canada. On his first operational flight with No 102 Squadron, he shot down a German Junkers Ju 88.

The historian Mark Johnson described this incident:
“He was a gentleman. He shot the night fighter’s engine with his machine guns, then he realized it was on fire and he then held fire while the German pilot and his crewmen climbed out and jumped off the back of the airplane and then he resumed firing and shot the rest of the airplane out of the sky”.

In August 1944 he was promoted to Flight Sergeant, a rare promotion for a gunner. In September 1944 he was awarded the Distinguished Flying Medal. The citation noted his “high standard of determination and devotion to duty”, exemplary conduct, and declared him “a worthy member of a fine crew” who had “defended his aircraft with great skill on several occasions against enemy fighters”.

In May 1947, Lynch was promoted to Flight Lieutenant.
In 1951, Lynch left the RAF and emigrated to the United States, taking up a role as Airline Flight Operation Officer. But in 1962 when his children were denied access to a largely white Long Island elementary school, he took the school district to court. The failure of the case inspired Lynch to become “one of Long Island’s most ardent and audacious civil rights activists.

In 1967, Lynch joined the New York Urban Coalition as Vice President and formed the Alliance of Minority Group Leaders. In the 1970s he taught community organization and activism at Stony Brook University and testified before Congress.

Lynch remained politically active and was one of many hundreds of people arrested during protests in Manhattan following the 1999 Shooting of (an unarmed 23-year-old Guinean immigrant) Amadou Diallo.
Lynch passed away in 2011.