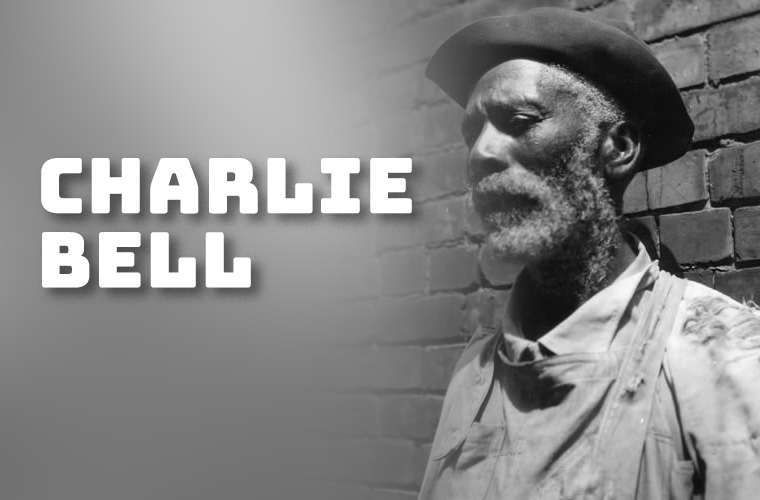 “I b’longed to Mr. Mo’ frum Poplarville in Pearl River County. They was ‘bout fo’ hund’ed slaves an’ up’ards of six hund’ed acres in cultivation; hit aint no tellin’ how many acres they was in all. I disremembers his fus’ name ‘cause I wasn’t but nine years old when de Surrender came in sixty-five an’ Mr. Mo’s oldest girl mar’ied, an’ me an’ my mama an’ my daddy an’ six others was part of her settin’-out. So we jes stayed on. She mar’ied Mr. Long-Bell-Lumber Company Bell, an’ that’s how come my name is Bell ‘stead of Mo’.

“My mother was bornd between Poplarville an’ Picayune an’ my father was bornd at Red Church forty mile below New Orleans. I have heard say my gran’father was bornd there too. My father was a carpenter an’ a blacksmith, could make a whole wagon, go out an’ cut him a gum tree an’ make a whole wooden wagon, an’ hubs an’ ever’thing. That’s how come they didn’ take him to de War; leave him at home ter make mule shoes an’ things. He was a powerful worker.

“I ‘tended de cows an’ calves – give ‘em water – an’ fed de chickens what roos’ in de big hen-house. But ‘fo I got big enough ter do that, I stay in de ‘long house’ with de other little fellers. It was jes hewed out er logs. They was notched ter fit – like this – an’ dobbed with mud an’ pine straw – wouldn’t never wash out. Three of de old women ‘tended ter de chullun an’ cooked they sompin’-t’ eat. They’d po’ syrup in ever’one of ‘em’s plate an’ ever’one of ‘em had a tin cup ter theyse’f fer they milk. They had a big oven like a frog-stool house, made out er mud. In de summer they moved hit out in de yard ‘cause de chullun didn’ stay in de ‘long house’ ‘cep’ in de winter. Hit was plum full then, though, an’ Miss Mo’ she come out ever’ day an’ teached us out’n a Blue Back Speller.

“Mr. Mo’ built a log church for his labor on de plantation. A white preacher come twice a month ter speak ter us. His tex’ would always be ‘Obey yo’ marster an’ mistress that yo’ days may be lingerin’ upon God’s green earth what he give you. We didn’t have no nigger preachin’ ter us when I was little.

“Some of de colored folks was pretty sociable. Some of ‘em was pretty good scholards, could read well enough ter go anywhere an’ enjoy theyse’fs. De niggers on de plantation danced a heap – seemed ter me like hit was mos’ ever’ night. You takes a coon skin an’ make a drum out of hit, stretch hit over a keg – a sawed-off one – dat make a fine drum. An’ banjos an’ fiddlers! Didn’t have no mandolines an’ gui-tars then.

“I’ve heard say they didn’ never buy medicine. Whenever one of ‘em got sick, they give ‘em peach-tree leaves fer chils an’ fever an’ biliousness; hit was boiled an’ steeped. An’ they give ‘em red-oak bark fer dysentery; put hit in a glass an’ po’ cold water over hit an’ drink off er hit all day. Fer jes plain sprains, they’d make a poultice out er okra leaves; hit ud show draw you! You know what they’d put on a bad sprain? Put a dirt-dobber’s nest an’ vinegar. When de chullun had dem bad colds like they has now, they give ‘em hic’ry bark tea, drink hit kinder warm, drink hit night an’ mornin’. Hit kep’ dat cough frum botherin’ ‘em.

“Mr. Mo’ went ter de War an’ come back all right. Found things on de plantation jes’ like he lef’ ‘em. You see, when you has servants arouns yo’ house, they keeps hit whether yo’ presence er yo’ absence is there. I show you what I means, madam. After Mr. Mo’ come back frum de Civil War, he had all de barns overhauled an’ banked ever’thing, turnips an’ ever’thing, so he’d be able ter take care er all his labor he had on de place. Didn’t but a few niggers leave. They all stayed wid him till he died. After he died, they scattered.

“When de Yankees come down endurin’ of de time of de War, I remembers ‘em comin’ by an’ givin’ us candy. They mus’ er been a hundred small chullun of us there. I say ter de old colored woman what looked after us, I say ‘Look here, they aint got no wagons like we got.’ They wagons wasn’t made like ours. The Yankees didn’t trouble nothin’ on de plantation. After I got grown, I found out why they didn’ bother us; ‘cause Mrs. Mo’ was a Eastern Star sister an’ de Gen’l wouldn’ let ‘em bother us. I tell you in a minute what his name was. He was a small-like stout man, had a little beard jes like dis ar-way . . . I’d know him right now if I was ter see him. Name Sherman – that was hit.

“I fus’ come ter Mer-ree-dian when I was a grown boy. Hit aint no piece over ter Poplarville frum here. I could walk hit in a day. Of co’’se, when I was a little feller, our larges’ city was Mobile or maybe B’loxi, but hit’s diffrunt now. Hit took eight days ter go ter Mobile in er ox wagaon th’ough de country. Hit wus de cotton market. We’d bring back coffee an’ cloth an’ shoes an’ things.

“Miss Bell went ter Arkansas ter live after she mar’ied an’ tuck us nine niggers with her. Mr. Bell raised me frum then on right frum his table. They’d go north ter spen’ de summer, er to California sometimes, an’ I go with ‘em wheresoever they go. I shined his shoes an’ put his clothes in de pressin’ club ever’day. I was with him thirty some years befo’ he died. I had three thousan’ dollars worth er stock in de Long-Bell Lumber Company. After while de lumber bus’ness got mighty bad an’ ever’body los’ they money, white folks an’ niggers too. I got these here gold teeth after I come ter Mer-ree-dian. Hit’s been my headquarters off an’ on like you know you has headquarters in a big place.

“I’se worked fer my bread an’ meat all my life. I works now fer Mr. McQuillan Beer ‘Stributin’ Company. But John Barleycorn, he’s a bad feller. Can’t no man beat John Barleycorn ‘cause he whups ever’ man that jumps on him. Heap er folks is sick fer that an’ if hit aint that, hit’s sompon’ else. I aint been sick any too much – aint took a dose er Epsom Salts since 1914.

“Me an’ my wife is sep-er-rated. She spent all de money I had an’ when de lumber bus’ness got bad an’ I couldn’t get no mo’, she tol’ me I wasn’t any good. So I jes walk off an’ lef’ her. I jes lives with a fam’ly in Royal Alley. I has chullun – ‘bout fo’teen head of ‘em – but they aint no good. They all grown an’ livin’ away frum here. I ‘spec’ I got a right smart er gran’chullun.”