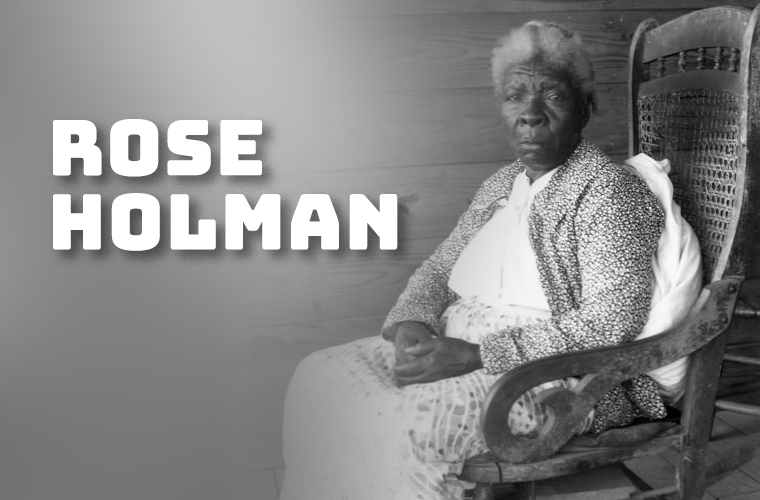 “I was born near Greensboro in what was then Choctaw county. My mama was Millie Drain an’ I had a outside papa. (He was Bob Jones.) My mama had several chillen born to her but me an’ my brother Anderson Drain is the only ones living now. Anderson, he jus’ ten years younger ‘n me. I ‘member he born de year befo’ de war ceasted. I was nursin’ him when we was freed. They tells me I was ten years old then an’ that’s all I knows ‘bout my age.”

“We lived in little log houses dobbed wid mud an’ didn’t have no beds–slept on de ground on pallets. We eat out o’ troughs down at Marsa’s back doo’ an et wid muscle shells fo’ spoons.”

“My Mama an’ her sister Cenie was sold. Mama used to slip back at night an’ bring us things an’ de white folks never knowed it. It sho’ would-a went hard wid her if dey’d ever caught her.”

“My job durin’ slavery days was toatin’ water an’ pickin’ up chips. I wasn’t like de other little niggers–my head wasn’t flat on top an’ old Missus saw I couldn’t tote nothin’ on my head. Other niggers could bring a bucket o’ water on their head an’ one in each hand. I was allus a sickly baby. My guts come down in my navel an’ I never was well ‘till I got grown. When I was a little baby Mama used to leave me in de cabin by my self fo’ hours at a time. Old Miss tell Mama: “Go down to dat house an’ see if dat little nigger aint dead.” They said I was allus a good baby.”

“Old Miss sho’ had a time wid me an’ her little chickens. I jus’ loved little chickens to death. I ‘member she wouldn’t let me round ‘em cause she’d ‘fraid I’d hurt em an’ one day I slipped off in de woods where de old hen an’ her bunch was. I caught every one of em an’ bit their heads off. Dat old hen fought me ‘till my face was covered in blood when I got to de house.”

“Mama never did ‘low us to dance. I never did ‘low my chillen to dance either. I ‘member gettin’ off one time an’ tryin’ to dance when they wasn’t nobody ‘round an’ stumped my toe. It broke me tho’. I never did try it no mo. I sho like to broke my toe tho’.”

“I ‘member hearin’ my nigger women say: “So glad I’s free! So glad I’s free!” De war was over an’ they didn’t have no boss. I ‘member Mama tellin’ ‘bout de Yankees cuttin’ de cloth out de loom an’ gettin’ up on it with their horses. They took de feather beds an’ throwed ‘em way but after they was gone we found em.”

“Mama said she had a better time in slavery days then after they was freed. She was a house girl. I’s heard some hollowin’: “Oh pray Mistus.” Law me, dey would be gettin’ some whippin’. These women dat didn’t work in de field sho’ had their four rolls to spin a day. Mama said she’d allus get hers–sometime she’d finish at night but heep o’ de women had to have a whippin’ ‘fore theirs was done an’ then they’d sho’ get busy.”

“I was 18 years old when I married Charlie Holman an’ he was even 21. My weddin’ dress was made out of’ dis swiss cloth an’ trimmed in blue ribbon. I wore a bow on my head an’ had a big bow ‘round my waist. My, I thought I was steppin’ out! We lived in de Tom Holman place in Choctaw county. I don’t know ‘xactley how long we lived there but we stayed in Louisiana eight years. I tells em dat was de hottest place I ever seen. De buds start swellin’ in de spring an’ de women start swellin’ too. More babies there ‘n I ever seen. Dis summer I’d be settin’ in de corner great big an next summer I’d be settin’ in de corner great big again. I’s de mother o’ eighteen an’ ain’t got but three now. De Lord sho’ saw fit to take ‘em. I was jus’ a good breeder. I liked livin’ in Louisiana ‘cept I jus’ didn’t like havin’ so many chillen. We moved out there in a ox wagon an’ it took three weeks to move there. Had a good old dog stayed wid us an’ kept de boogers off on de trip. When we moved back we come on de train. When we got back from Louisiana we moved over in Webster county, near Eupora wid Mr. Estel Bridges an’ we’s been ‘round here ever since.”

“I belong to de Baptist church. Didn’t join ‘till I’s plum grown. I knowed what I was doin’. We’s all got to be regenerated an’ born again befo’ we leaves dis old world. I tell you de old Time Religion is de best kind o’ ligion.”

“I tells you they’s somethin’ behind all dese geese dats gone over dis fall. Dat sho’ means bad weather ahead. I can tell de young folks when its gon-a rain. My Rheumatism start hurtin’ me den it’s sho’ to rain.”