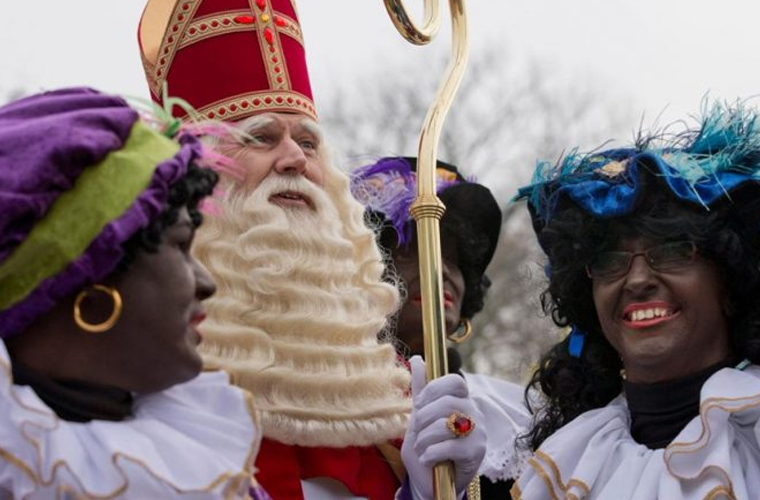 Before the Netherlands abolished slavery in 1863, the country was deeply involved in the transatlantic slave trade. It grew prosperous by selling enslaved people to the United States or sending them to work in Dutch colonies, and some nobles “gifted” each other with enslaved black children, who are shown in paintings wearing colorful, Moorish clothing similar to Black Pete’s.

Thanks to the work of activists like Quinsy Gario, who started the project Zwarte Piet is Racisme(“Black Pete is racism”), some cities and schools have begun phasing blackface out of their celebrations. So far this has involved changing Pete’s image rather than getting rid of him completely, a “solution” that Gario doesn’t necessarily think is adequate.

For instance, Amsterdam’s Christmas parade recently changed Black Pete to Schoorsteen Piet, or “Chimney Pete.” Organizers have replaced his black face paint with soot and done away with Black Pete’s wig, gold earrings, and exaggerated red lips. They’ve also changed his Moorish outfit so he looks more like a 16th-century Spanish nobleman (in some versions of the tradition, Pete is from Spain). In a statement to the Dutch news site NL Times, a spokesperson for the city’s parade explained why the old costume had to go: “We looked at artwork all the way back to the 17th century. Wealthy Amsterdammers would dress up a black child in these outfits and give them as gifts.”

Yet as the movement against Black Pete gains more national attention, a pro-blackface backlash is quickly bubbling into public spaces. At the incidences in the primary school in Utrecht and the city council meeting in Amsterdam, people showed up in blackface specifically because those two places had stopped using it in their Christmas celebrations. In other towns, people are digging in their heels, insisting that their parades will stick with “tradition.”

Many white Netherlanders are still “in denial over our role in slavery,” Hermes says, and thus reject the idea that Black Pete could be connected to it. Yet for a lot of people, the link is both painful and unavoidable. In 2015, the United Nations urged the Netherlands to get rid of Black Pete because many see it as a “vestige of slavery.”

So far, most of the country has ignored the UN’s request. But in the Netherlands and abroad, the movement against Black Pete is growing.