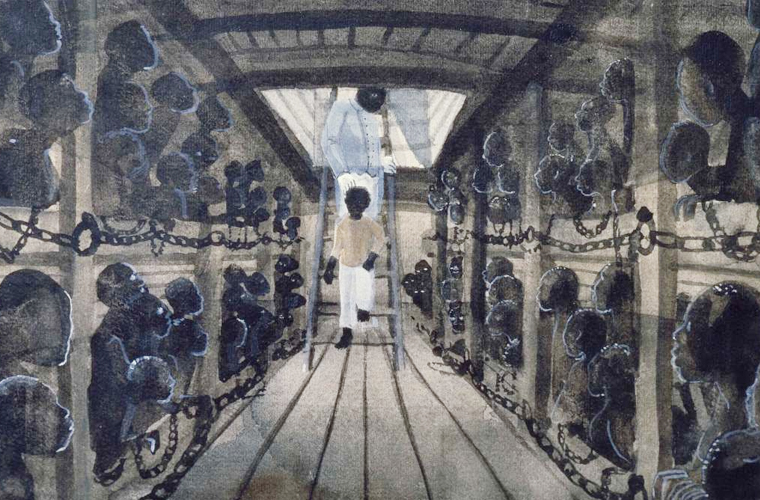 Slave ships ranged in size from the ten-ton Hesketh, which sailed out of Liverpool and delivered slaves to Saint Kitts in 1761, to the 566-ton Parr, another Liverpool ship that sailed in the 1790s. Ships comparable in size to the Hesketh were designed to carry as few as six pleasure passengers; refitted as a slaver, the Hesketh transported a crew plus thirty Africans. The Parr, on the other hand, carried a crew of 100 and a cargo of as many as 700 slaves. Most ships—nicknamed Guinea men, after the Gulf of Guinea on the west coast of Africa—were sized somewhere in between, growing in tonnage over time as the Atlantic trade itself grew. American traders preferred somewhat smaller ships than their British counterparts: two-masted sloops (25 to 75 tons) and schooners (30 to 150 tons) required smaller crews and shorter stays on the African coast, where tropical diseases were a constant threat to crew and cargo alike.

At first, merchants adapted general merchant vessels for the slave trade. Later they built ships to the trade’s particular specifications, which included portholes for better airflow to the lower decks and copper-sheathed hulls to combat the wood rot and boring worms found in tropical waters. Sometimes ships were modified to increase the space between decks, although a typical 140-ton Guineaman might have had only four and a half feet between the lower deck’s floor and ceiling. The low clearance would have precluded many of the Africans from standing. The lower deck generally was divided into separate compartments for men and women, with the males shackled together in pairs. Most women were left unchained but confined below, while children had the run of the ship. African men and women used the children as a means to communicate with one another and, in some cases, to plan an insurrection. 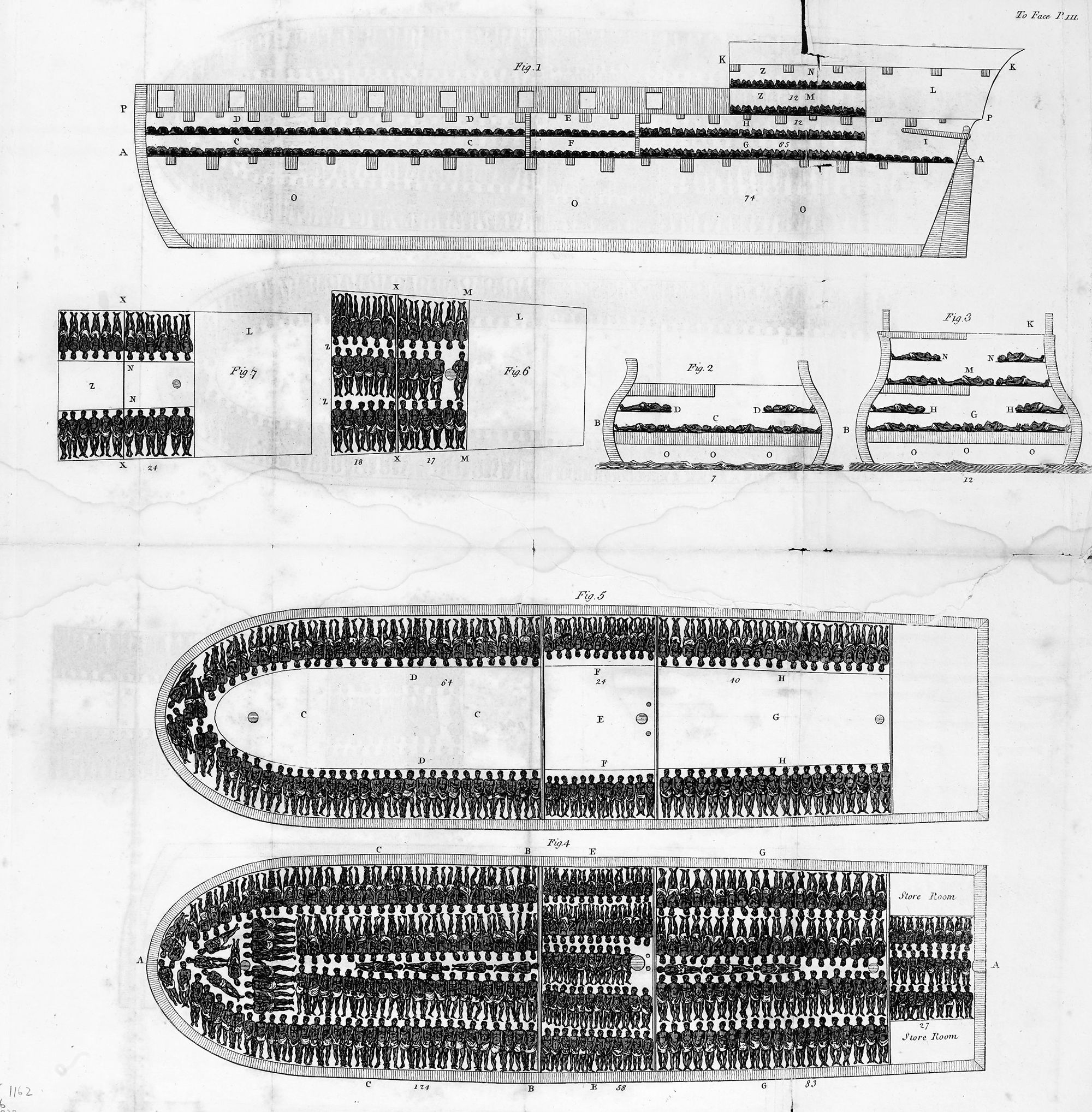 A wooden grating separated the men’s quarters from the main deck and was designed, along with the portholes, to facilitate airflow through the lower deck. Even so, one observer described the area below decks as “most impure and stifling,” while the anonymous author of Liverpool and Slavery: An Historical Account of the Liverpool-African Slave Trade by a Genuine “Dicky Sam” (1884) cited a trader who “stated that after remaining ten minutes in the hold, his shirt was as wet as if it had been in a bucket of water.” “So close and foul was the stench,” the writer insisted, that some enslaved Africans “have been known to be put down the hold strong and healthy at night; and have been dead in the morning.”

The captain and his officers enjoyed personal cabin space, usually below the raised quarterdeck at the stern of the ships, while common sailors slept on the main deck, sometimes under the cover of a tarpaulin or in the longboat. Also on the main deck, and built especially for the slave ship, was a ten-foot-tall wooden barricade that bisected the deck at the main mast and extended about two feet beyond the ship’s sides. The Africans spent about eight hours a day on the main deck, and the so-called barricado separated the African men from the women. In the case of insurrection, the crew retreated to the women’s side and used the barricado as a defensive fortification.

Captain William Snelgrave, in A new account of some parts of Guinea, and the slave trade (1734), described how a group of African men ” endeavored to force the Barricado on the Quarter-Deck, not regarding the Musquets or Half Pikes, that were presented to their Breasts by the white Men, through the Loop-holes.” Slave ships were well armed in case of insurrection or attack by pirates. According to an officer on the 140-ton Diligent, which sailed out of France in 1731, the ship carried “eight four-pound cannons, fifty-five muskets, eighteen pistols, twenty swords, and two swivel guns, all in excellent condition.”

While the ships were still off the coast of Africa—accumulating cargoes could take from a few weeks to several months—the crew built a “house”: a bamboo enclosure on the main deck designed to secure Africans prior to leaving the coast. The sailor James Field Stanfield, in Observations on a Guinea voyage (1788), labeled the business of constructing the house “destructive” and “fatal,” because harvesting the bamboo forced crew members to be “immersed up to the waist in mud and slime; pestered by snakes, worms, and venomous reptiles; and tormented by mosquitoes, and a thousand assailing insects,” all the while being whipped and otherwise prodded by “their relentless officers.”

Once the crew was ready to begin the Middle Passage, they removed the house and hung netting from the sides of the ship. This was designed to catch anyone who tried to escape by jumping overboard. (Although many enslaved Africans committed suicide in this way, so did some crew members, who were also tormented by disease, low-quality food, and the officers’ whips.) In the warm waters, sharks often followed the ships, feeding off refuse. “When dead Slaves are thrown overboard,” the Dutch merchant William Bosman wrote in A New and Accurate Description of the Coast of Guinea (1705), “I have sometimes, not without horror, seen the dismal Rapaciousness of these Animals; four or five of them together shoot to the bottom under the Ship to tear the dead Corps to pieces, at each bite an Arm, a Leg, or the Head is snapped off; and before you can tell twenty have sometimes divided the Body amongst them so nicely that not the least Particle is left.”

The dangers of the Middle Passage for its crew often were greater the closer the ship was to Africa. While both Europeans and Africans suffered from dysentery, the leading cause of death, the sailors on the ship also were susceptible to diseases prevalent along the African coast, such as malaria and yellow fever. In addition, measles, smallpox, influenza, scurvy, dehydration, and depression took their toll on the captives below decks as the journey progressed. Escape attempts and insurrections also presented a particular danger early in the voyage, when enslaved Africans clung to some hope of making it back to the mainland.

The captain’s responsibilities were manifold. As an employee of a merchant or company in Europe or the Americas, he hired and managed the crew; outfitted the ship; sold its cargo for humans on the coast of Africa; enforced harsh discipline on crew members and Africans alike in the Middle Passage; worked to prevent mutiny, insurrection, and sickness; aided other captains when in need; and sold the slaves in America for the best possible price. The “crux of the whole enterprise,” however, was discipline, according to the historian Marcus Rediker. Maintaining order was critical in keeping an often-desperate crew in line, and the routine violence employed by the captain and his officers trickled down the ranks, as the author of Liverpool and Slavery pointed out: “The captain bullies the men, the men torture the slaves, the slaves’ hearts are breaking with despair.”

Crew members were often the direct recipients of the cruelty. Frequently forced into shipboard service because of debts or run-ins with the law, sailors performed the backbreaking and often violent work of the slave ship, which included building the “house” and barricado, cooking and dispensing food, scrubbing the decks and the often feces-covered hold where the slaves were kept, and policing the captive Africans. They also were the victims of their officers’ whips and suffered from the same diseases that ravaged the Africans, so the mortality rate among sailors, according to one survey taken between 1784 and 1790, reached higher than 21 percent. In fact, according to Rediker, “Half of all Europeans who journeyed to West Africa in the eighteenth century, most of the seamen, died within a year.”