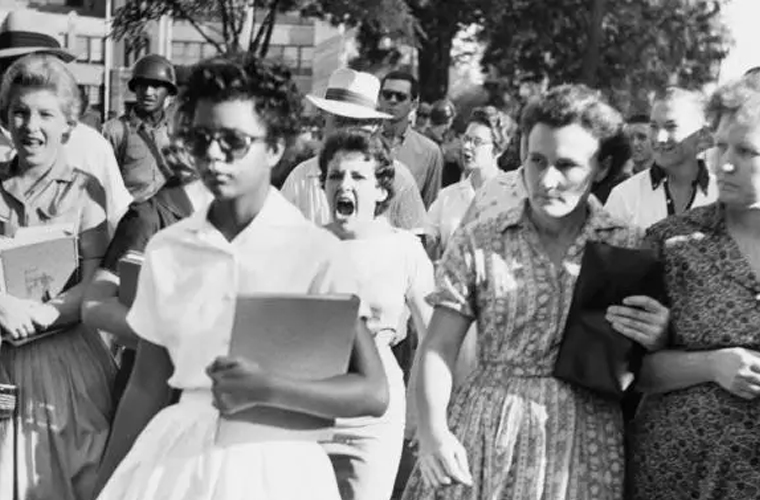 You’ve probably seen the photo: a young African-American girl walks to school, her eyes shielded by sunglasses. She is surrounded by a hateful crowd of angry white people, including a girl caught mid-jeer, her teeth bared and her face hardened with anger. It’s one of the most famous images of the civil rights era, but it turns out that the story of the young women in the photo is even more complicated than the racial drama their faces portray.

Hazel Bryan was just 15 when the photo was taken, but her actions on September 4, 1957—and the hatred on her face—turned her into an infamous symbol of the bigotry of Jim Crow and the intolerance faced by the students who tried to go to the school that day.

It was the first day of school in Little Rock, Arkansas, and Elizabeth Eckford, also 15 and the girl Bryan was screaming at, was headed to class at Little Rock Central High School. That fact alone was anything but normal: Eckford and eight other black students were recruits sent to the all-white school to test Arkansas’ supposed intention to integrate its schools.

Three years earlier, the Supreme Court ruled the segregation of public schools unconstitutional. But in a South ruled by the brutality of Jim Crow, many whites clung to segregation. Like other Southern states, Arkansas dragged its feet, and when the Supreme Court tried to force integration with a second landmark decision, the Little Rock school board decided it would integrate its schools over a period of many years.

But on the first day of school, a mob of furious white people assembled to make sure they couldn’t get in. The black students had trained for this moment. But nothing could prepare Eckford for the screaming, taunting crowd that surrounded the school. They called out for her to be lynched and yelled slogans like “Two, four, six-eight, we don’t want to integrate!” In the midst of the horde, reporters and photojournalists recorded the chaos.

Women in the crowd “shrieked in spasms, as tears flowed down their cheeks,” wrote one reporter. Screams of obscenities and slurs echoed through Eckford’s ears. A group of girls—including Bryan— “started to shriek and wail” as Eckford passed and headed toward the school.  As she clutched a folder, trying to move forward, Bryan screamed at her and told her to “go back to Africa.”

Eckford and the rest of the Nine never made it into the school that day. Acting on the orders of Governor Orville Faubus, Arkansas National Guardsmen stopped her at the door and she was chased away from the school by the mob. Later that month, after President Dwight Eisenhower intervened, Eckford and the other eight students went back to school escorted by members of the 101st Airborne and were finally allowed in.

The day after the incident, the photograph, taken by photojournalist Will Counts, ran on the front page of the Arkansas Democrat. It and a similar wire photo were taken by another photographer, quickly spread throughout the country. When Bryan received disapproving mail, her parents pulled her from the school.

Meanwhile, Eckford endured constant harassment and hatred inside the school she had helped integrate. She was spat upon, punched, hit with eggs and vegetables, and faced with a barrage of slurs and insults all year long. Though Eckford managed to finish the school year, the bigots of Little Rock could not abide by another year with integrated schools. Rather than repeat integration the next year, they shut down schools altogether.

But though Little Rock’s schools reopened—and finally integrated—the year after, the story didn’t end there. When Eckford, who moved to St. Louis soon after, visited Little Rock at age 21, she received a call from Bryan, who apologized. Then they went their separate ways again.

Eckford stayed silent about her ordeals for years and suffered from depression and trauma throughout her adult life. Bryan spent years atoning on her own, learning about the civil rights movement, and becoming more racially conscious. In 1997, Will Counts, the photographer whose iconic shot was by then considered a defining document of a moment in the struggle for black equality in the United States, arranged for the two to meet in person. Forty years after Bryan screamed at Eckford, they reunited, reconciled and became friends. 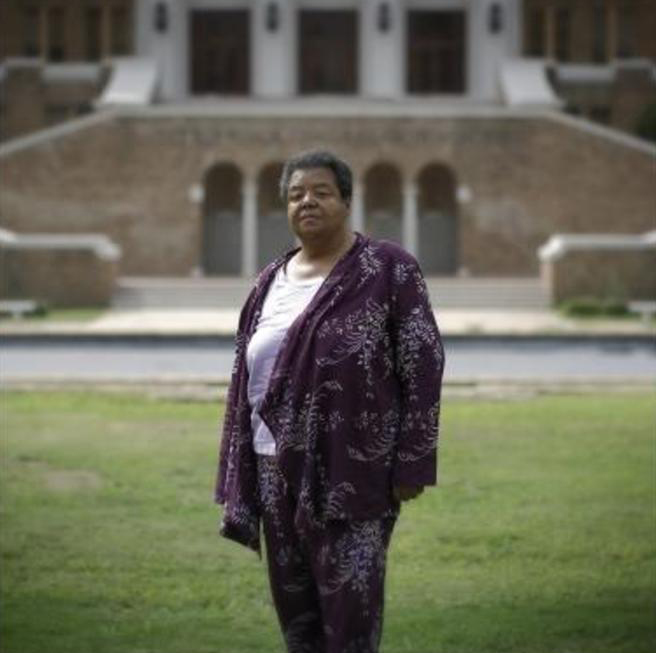 Elizabeth Eckford in front of the main entrance of Central High School in Little Rock, Arkansas, 2007. Eckford was the first of nine black schoolchildren to make history on September 4th, 1957 when she arrived, alone, for the first day of classes at the all-white high school.

Or did they? After a brief, the warm friendship that saw them attend events and seminars together and even pose for a poster entitled “Reconciliation” that featured a modern-day photo of the pair outside Little Rock Central, their paths split again when they realized they could not truly reconcile. “True reconciliation can occur only when we honestly acknowledge our painful but shared past,” said Eckford.

Though both Hazel Bryan—now Massey—and Elizabeth Eckford are still alive, it’s unclear if they will find that reconciliation during their lifetimes. Their journey from enemies to friends to tense acquaintances is a reminder of the lasting effects of America’s history, just as the photograph of two diametrically opposed girls shows just how far the nation has come.