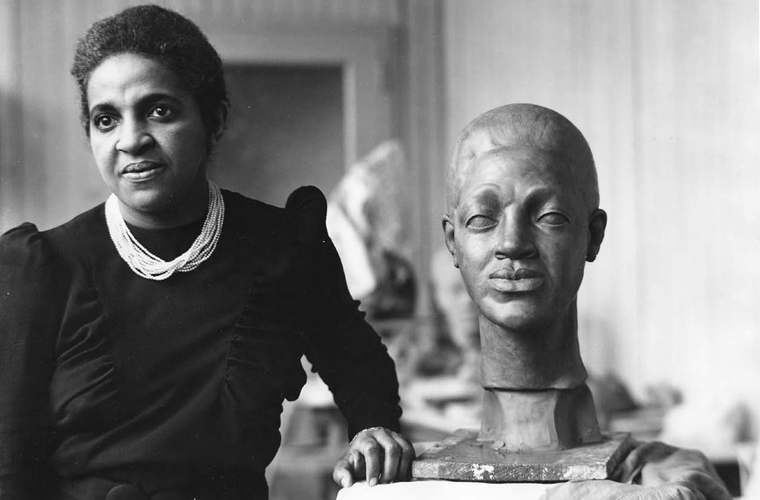 Selma Burke discovered her love for sculpture as a young child and followed her passion to Harlem Renaissance New York, Parisian art studios, and even the White House. The artist behind President Franklin Roosevelt’s image on the dime was a dedicated art teacher and one of the most notable sculptors of the twentieth century.

Selma Hortense Burke was born on December 31, 1900, in Mooresville, North Carolina. She was the seventh of Mary Jackson and Neal Burke’s 10 children. Her father was a Methodist minister who also worked on the railroads and cruise ships. Burke’s interest in art began at an early age, sculpting small objects and animals with white clay from a nearby riverbed. “One day, I was mixing the clay and I saw the imprint of my hands,” she told the New York Post in 1945. “I found that I could make something… something that I alone had created.”

Burke’s father encouraged her artistic pursuits. She often used the objects he brought back from his ocean travels as models for her sculptures. Her interest in African art began with a collection of African artifacts the family inherited from Burke’s uncles who had done missionary work abroad. Burke’s mother, on the other hand, encouraged her to follow the more practical career path of nursing. Burke graduated from the Slater Industrial and Slater Normal School (later Winston-Salem State University) in 1922. She went on to Saint Agnes Training School for Nurses in Raleigh, North Carolina, where she graduated as a registered nurse in 1924. After that, she completed further nursing training in Philadelphia. She married her childhood friend Durant Woodward, but she was widowed when he died not long after their wedding.

Burke moved to New York City in the late 1920s where she worked as the private nurse for Amelia Waring, an heiress to the Otis Elevator empire. Waring helped Burke gain exposure to the arts and culture scenes in New York. Burke began socializing with the artists and writers associated with the Harlem Renaissance. She was romantically involved with poet and novelist Claude McKay (sources vary as to whether they ever legally married), but it was a tumultuous pairing and the two soon separated. After Waring’s death, Burke left nursing and turned her focus to sculpture.

She studied art at Sarah Lawrence College, modeling to pay for her classes. Burke twice traveled to Europe to hone her technique, where she studied under artists such as Henri Matisse and Aristide Maillol in Paris. But with the threat of Nazism rising in Europe, Burke returned to the United States. She taught art to youth in New York City through the Works Progress Administration’s Federal Art Project and the Harlem Community Arts Center, where influential sculptor Augusta Savage was her mentor. In 1940, Burke opened the Selma Burke School of Sculpture. The next year, Burke earned a Master of Fine Arts degree from Columbia University (where she had received a scholarship) and held her first solo exhibit in a New York gallery.

Following the entry of the United States into World War II, Burke enlisted in the Navy, becoming one of the first African-American women to sign up. Her assignment was to drive a truck at the Brooklyn Navy Yard. She injured her back on the job and while recuperating, she won a nationwide contest for the commission of a bronze relief portrait of President Franklin Roosevelt. Burke felt that photographs of Roosevelt were inadequate for her needs and requested a sitting with the President so she could draw him. Roosevelt agreed and Burke sketched Roosevelt over two days in February 1944.

Roosevelt passed away in April 1945. His successor, President Harry S. Truman, unveiled Burke’s relief portrait at the Recorder of Deeds Building in Washington, D.C. on September 24, 1945. Though she endorsed it, Eleanor Roosevelt reportedly did not like the portrait at first, as it depicted her husband as a younger man. Burke responded that she intended the image to represent Roosevelt as Americans had long known him, not as he appeared in his final years. In addition to the bronze portrait, Burke’s profile of Roosevelt is widely acknowledged as the basis for his image on the U.S. dime. The dime’s image is officially attributed to U.S. Mint Chief Engraver John Sinnock, but many, including Burke, claim that Sinnock borrowed from Burke’s depiction.

Burke described herself as “a people’s sculptor” and intended for her art to speak to wide audiences, including those who lacked an arts education. Her work often focused on the human body and she used brass, bronze, alabaster, and limestone, among other materials. Her sculptures included figures and busts of prominent African Americans such as John Brown, Duke Ellington, Mary McLeod Bethune, and A. Philip Randolph. Some of her well-known pieces include Torso (1937), Temptation (1938), (Untitled) Woman and Child (1950), and Together (1975).

Burke married architect Herman Kobbe in 1949 and the two moved to an artists’ colony in New Hope, Pennsylvania. Kobbe passed away in 1955, but Burke remained in Pennsylvania for the rest of her life. Burke continued to emphasize arts education, running the Selma Burke Art Center in Pittsburgh from 1968-1981. She taught children about the vibrancy of sculpture and encouraged them to touch works of art in order to fully understand them. In 1979, President Jimmy Carter awarded Burke with a Women’s Caucus for Art Lifetime Achievement award. Burke received honorary doctorates from Livingstone College in 1970 and Spelman College in 1988.

Burke completed her final sculpture in 1980: a nine-foot bronze statue of Martin Luther King Jr. that stands in Marshall Park in Charlotte, North Carolina. She passed away in 1995 in New Hope, Pennsylvania. Her sculptures are still on display at institutions such as Winston-Salem State University, the Smithsonian American Art Museum, and the Mooresville Public Library in her North Carolina hometown.

That’s right. The image of former President Franklin D. Roosevelt you see on the common American dime was adapted from a sculpture commissioned by African-American sculptor, Selma Hortense Burke.