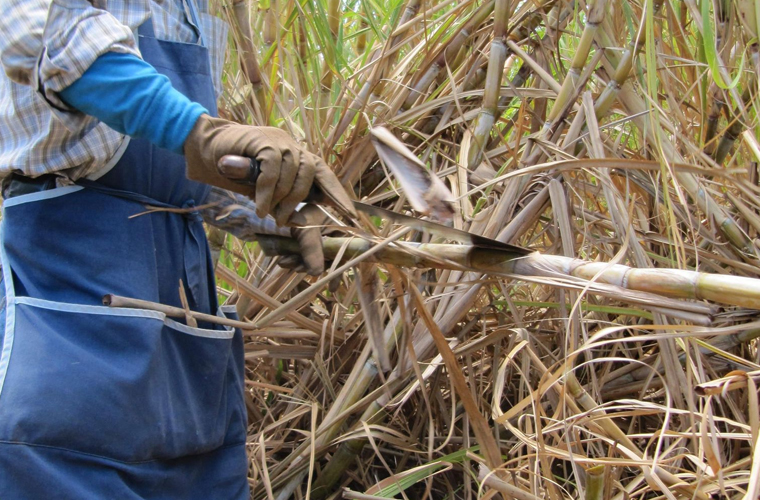 Domino Sugar’s Chalmette Refinery in Arabi, La., sits on the edge of the mighty Mississippi River, about five miles east by way of the river’s bend from the French Quarter, and less than a mile down from the Lower Ninth Ward, where Hurricane Katrina and the failed levees destroyed so many black lives. It is North America’s largest sugar refinery, making nearly two billion pounds of sugar and sugar products annually. Those ubiquitous four-pound yellow paper bags emblazoned with the company logo are produced here at a rate of 120 bags a minute, 24 hours a day, seven days a week during operating season.

The United States makes about nine million tons of sugar annually, ranking it sixth in global production. The United States sugar industry receives as much as $4 billion in annual subsidies in the form of price supports, guaranteed crop loans, tariffs and regulated imports of foreign sugar, which by some estimates is about half the price per pound of domestic sugar. Louisiana’s sugar-cane industry is by itself worth $3 billion, generating an estimated 16,400 jobs.

A vast majority of that domestic sugar stays in this country, with an additional two to three million tons imported each year. Americans consume as much as 77.1 pounds of sugar and related sweeteners per person per year, according to United States Department of Agriculture data. That’s nearly twice the limit the department recommends, based on a 2,000-calorie diet.

Sugar has been linked in the United States to diabetes, obesity and cancer. If it is killing all of us, it is killing black people faster. Over the last 30 years, the rate of Americans who are obese or overweight grew 27 percent among all adults, to 71 percent from 56 percent, according to the Centers for Disease Control, with African-Americans over represented in the national figures. During the same period, diabetes rates overall nearly tripled. Among black non-Hispanic women, they are nearly double those of white non-Hispanic women, and one and a half times higher for black men than white men.

None of this — the extraordinary mass commodification of sugar, its economic might and outsize impact on the American diet and health — was in any way foreordained, or even predictable, when Christopher Columbus made his second voyage across the Atlantic Ocean in 1493, bringing sugar-cane stalks with him from the Spanish Canary Islands. In Europe at that time, refined sugar was a luxury product, the backbreaking toil and dangerous labor required in its manufacture an insuperable barrier to production in anything approaching bulk. It seems reasonable to imagine that it might have remained so if it weren’t for the establishment of an enormous market in enslaved laborers who had no way to opt out of the treacherous work.

For thousands of years, cane was a heavy and unwieldy crop that had to be cut by hand and immediately ground to release the juice inside, lest it spoil within a day or two. Even before harvest time, rows had to be dug, stalks planted and plentiful wood chopped as fuel for boiling the liquid and reducing it to crystals and molasses. From the earliest traces of cane domestication on the Pacific island of New Guinea 10,000 years ago to its island-hopping advance to ancient India in 350 B.C., sugar was locally consumed and very labor-intensive. It remained little more than an exotic spice, medicinal glaze or sweetener for elite palates.

It was the introduction of sugar slavery in the New World that changed everything. “The true Age of Sugar had begun — and it was doing more to reshape the world than any ruler, empire or war had ever done,” Marc Aronson and Marina Budhos write in their 2010 book, “Sugar Changed the World.” Over the four centuries that followed Columbus’s arrival, on the mainlands of Central and South America in Mexico, Guyana and Brazil as well as on the sugar islands of the West Indies — Cuba, Barbados and Jamaica, among others — countless indigenous lives were destroyed and nearly 11 million Africans were enslaved, just counting those who survived the Middle Passage.

“White gold” drove trade in goods and people, fueled the wealth of European nations and, for the British in particular, shored up the financing of their North American colonies. “There was direct trade among the colonies and between the colonies and Europe, but much of the Atlantic trade was triangular: enslaved people from Africa; sugar from the West Indies and Brazil; money and manufactures from Europe,” writes the Harvard historian Walter Johnson in his 1999 book, “Soul by Soul: Life Inside the Antebellum Slave Market.” “People were traded along the bottom of the triangle; profits would stick at the top.”

Before French Jesuit priests planted the first cane stalk near Baronne Street in New Orleans in 1751, sugar was already a huge moneymaker in British New York. By the 1720s, one of every two ships in the city’s port was either arriving from or heading to the Caribbean, importing sugar and enslaved people and exporting flour, meat and shipbuilding supplies. The trade was so lucrative that Wall Street’s most impressive buildings were Trinity Church at one end, facing the Hudson River, and the five-story sugar warehouses on the other, close to the East River and near the busy slave market. New York’s enslaved population reached 20 percent, prompting the New York General Assembly in 1730 to issue a consolidated slave code, making it “unlawful for above three slaves” to meet on their own, and authorizing “each town” to employ “a common whipper for their slaves.”

In 1795, Étienne de Boré, a New Orleans sugar planter, granulated the first sugar crystals in the Louisiana Territory. With the advent of sugar processing locally, sugar plantations exploded up and down both banks of the Mississippi River. All of this was possible because of the abundantly rich alluvial soil, combined with the technical mastery of seasoned French and Spanish planters from around the cane-growing basin of the Gulf and the Caribbean — and because of the toil of thousands of enslaved people. More French planters and their enslaved expert sugar workers poured into Louisiana as Toussaint L’Ouverture and Jean-Jacques Dessalines led a successful revolution to secure Haiti’s independence from France.

Within five decades, Louisiana planters were producing a quarter of the world’s cane-sugar supply. During her antebellum reign, Queen Sugar bested King Cotton locally, making Louisiana the second-richest state in per capita wealth. According to the historian Richard Follett, the state ranked third in banking capital behind New York and Massachusetts in 1840. The value of enslaved people alone represented tens of millions of dollars in capital that financed investments, loans and businesses. Much of that investment funneled back into the sugar mills, the “most industrialized sector of Southern agriculture,” Follett writes in his 2005 book, “Sugar Masters: Planters and Slaves in Louisiana’s Cane World 1820-1860.” No other agricultural region came close to the amount of capital investment in farming by the eve of the Civil War. In 1853, Representative Miles Taylor of Louisiana bragged that his state’s success was “without parallel in the United States, or indeed in the world in any branch of industry.”

The enslaved population soared, quadrupling over a 20-year period to 125,000 souls in the mid-19th century. New Orleans became the Walmart of people-selling. The number of enslaved labor crews doubled on sugar plantations. And in every sugar parish, black people outnumbered whites. These were some of the most skilled laborers, doing some of the most dangerous agricultural and industrial work in the United States.

In the mill, alongside adults, children toiled like factory workers with assembly-line precision and discipline under the constant threat of boiling hot kettles, open furnaces and grinding rollers. “All along the endless carrier are ranged slave children, whose business it is to place the cane upon it, when it is conveyed through the shed into the main building,” wrote Solomon Northup in “Twelve Years a Slave,” his 1853 memoir of being kidnapped and forced into slavery on Louisiana plantations.

To achieve the highest efficiency, as in the round-the-clock Domino refinery today, sugar houses operated night and day. “On cane plantations in sugar time, there is no distinction as to the days of the week,” Northup wrote. Fatigue might mean losing an arm to the grinding rollers or being flayed for failing to keep up. Resistance was often met with sadistic cruelty.

A formerly enslaved black woman named Mrs. Webb described a torture chamber used by her owner, Valsin Marmillion. “One of his cruelties was to place a disobedient slave, standing in a box, in which there were nails placed in such a manner that the poor creature was unable to move,” she told a W.P.A. interviewer in 1940. “He was powerless even to chase the flies, or sometimes ants crawling on some parts of his body.”

Louisiana led the nation in destroying the lives of black people in the name of economic efficiency. The historian Michael Tadman found that Louisiana sugar parishes had a pattern of “deaths exceeding births.” Backbreaking labor and “inadequate net nutrition meant that slaves working on sugar plantations were, compared with other working-age slaves in the United States, far less able to resist the common and life-threatening diseases of dirt and poverty,” wrote Tadman in a 2000 study published in the American Historical Review. Life expectancy was less like that on a cotton plantation and closer to that of a Jamaican cane field, where the most overworked and abused could drop dead after seven years.