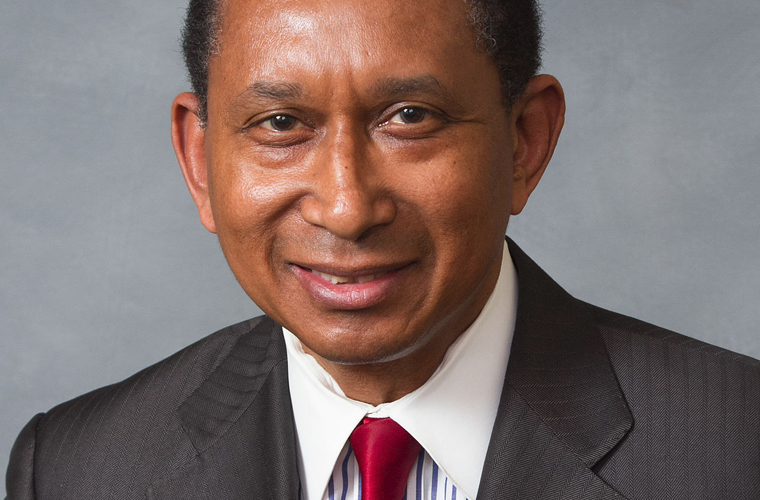 Floyd McKissick was the first African American student at the University of North Carolina at Chapel Hill’s Law School. In 1966 he became leader of CORE, the Congress of Racial Equality, taking over from James L. Farmer, Jr. A supporter of Black Power, he turned CORE into a more radical movement. In 1968, McKissick left CORE to found Soul City in Warren County, North Carolina. He endorsed Richard Nixon for president that year, and the federal government, under President Nixon, supported Soul City. He became a state district court judge in 1990

Floyd B. McKissick was born in the affluent community of Asheville, North Carolina on March 9, 1922. A summer vacation spot for the wealthy near the Smokey Mountains, Asheville boasted several large hotels and estates. McKissick’s father worked at the Vanderbilt Hotel as a head bellhop, a position that provided the family financial comfort at the cost of individual dignity. According to the New York Post, McKissick’s father told him: “There isn’t going to be but one [Uncle] Tom in this family, and that’s going to be me. So you go out and get yourself an education, so you don’t have to be an Uncle Tom.” The same message was repeated to McKissick’s three sisters, who also attended college and took white collar jobs.

McKissick worked his way through high school by delivering groceries and newspapers and by shining shoes. He graduated from high school at the outset of World War II and was drafted into the Army, where he climbed the ranks to sergeant. Seeing the action in Europe, he was awarded a Purple Heart for an injury sustained during battle.

After the war, Floyd McKissick used funds from the GI bill to help him attend college. He entered the all-black Morehouse College in Atlanta. While still in college he was named youth chairman of the North Carolina NAACP. McKissick was also an early member of the Congress of Racial Equality. CORE was an interracial organization that sought to publicize the plight of blacks through nonviolent demonstrations. In 1947 McKissick joined CORE founder James Farmer on the Journey of Reconciliation.

After passing the bar, Floyd McKissick opened a law practice in Durham, North Carolina in 1960. As a lawyer, McKissick informed the New York Post that he realized education was not the sole solution for oppressed American blacks. “I was as educated as any white lawyer in my area,” he commented. “Do you think I had the opportunity to be a judge? You can educate the black man [but] you’ve got to overcome the racism to get him the job. There’s got to be some counterpart in the education of that portion of the white community that is bigoted.”

Using his own children as test cases, Floyd McKissick successfully challenged several all-white schools in Durham, North Carolina. He also quickly became an ad hoc lawyer for CORE, defending demonstrators who were brought to trial on charges of sitting at lunch counters and in theaters marked “for whites only.” At one point in the early 1960s, McKissick’s law firm was handling 5,600 cases simultaneously, and the zealous lawyer was traveling throughout the United States.

When Floyd McKissick replaced James Farmer as head of CORE on January 3, 1966, the organization completed a 180-degree turn that saw it change from an interracial integrationist civil rights agency pledged to uphold nonviolence into a militant and uncompromising advocate of the ideology of black power. “Black power is no mere slogan,” McKissick iterated in the New York Times in 1966. “It is a movement dedicated to the exercise of American democracy in its highest tradition; it is a drive to mobilize the black communities of this country in a monumental effort to remove the basic causes of alienation, frustration, despair, low self-esteem, and hopelessness.”

McKissick added that under his supervision, CORE would seek to bring political-economic power to blacks, especially those in the ghetto.  McKissick and Roy Innis, who at that time was the head of the Harlem chapter of CORE, were close allies, and when McKissick left CORE in 1968, Innis took over.

In 1970 McKissick won federal funds from the New Communities Act to build a whole new town, Soul City, in rural North Carolina. Fired by visions of a black-run metropolis with business and industrial opportunities for minority enterprises, McKissick and his family became pioneer residents of Soul City. McKissick predicted that the community would have more than 40,000 residents by the turn of the century.

His plans never materialized; additional government grants did not arrive, and by the end of the 1970s the U.S. Department of Housing and Urban Development foreclosed on its multimillion-dollar loan to the city. In 1991 it was estimated that Soul City had a population of about 200, all living in homes built by the federal government. Although the community has a health clinic and several small industries, retail shopping facilities are lacking. The nearest grocery store is 15 miles away, and the children must travel long distances to school by bus.

Atlanta Constitution correspondent Pete Scott suggested in 1991 that the Soul City experiment was far from a total failure. “Soul City is a curious mix of the planned and unimagined,” he noted. “It has never come close to the size or self-sufficiency that McKissick had hoped for. But for the people who live there, it has become a closely knit community.”