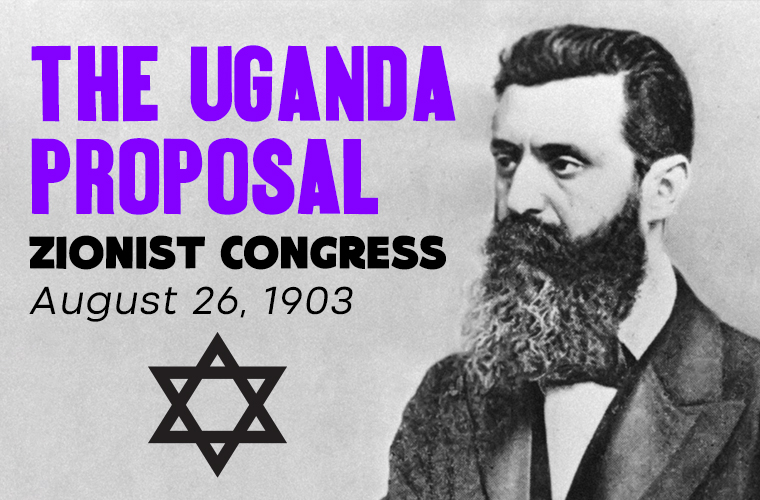 When Theodor Herzl began his quest to establish a homeland for the Jewish people, he sought out the support of the great powers to help achieve his goal. In 1903, Herzl turned to Great Britain and met with Joseph Chamberlain, the British colonial secretary, and other high-ranking officials who agreed in principle to Jewish settlement in East Africa.

At the Sixth Zionist Congress at Basel on August 26, 1903, Herzl proposed the British Uganda Program as a temporary refuge for Jews in Russia in immediate danger. By a vote of 295-178, it was decided to send an expedition (“investigatory commission”) to examine the territory proposed. Three days later the British government released an official document allocating a “Jewish territory” in East Africa “on conditions which will enable members to observe their national customs.”

While Herzl made it clear that this program would not affect the ultimate aim of Zionism, a Jewish entity in the Land of Israel, the proposal aroused a storm at the Congress and nearly led to a split in the Zionist movement. The Jewish Territorialist Organization (ITO) was formed as a result of the unification of various groups who had supported Herzl’s Uganda proposals during the period 1903-1905.

The Uganda Program was finally rejected by the Zionist movement at the Seventh Zionist Congress in 1905, but Nahum Syrkin and Israel Zangwill called an alternative conference to continue the plan of the Uganda scheme.

The fortunes of the territorialist movement depended to no small degree on the seriousness of anti-Semitism on the one hand and the failure of the political dimension of Zionist activity on the other. So, for example, the movement’s ranks swelled somewhat following the pogroms in 1905 but declined considerably after the securing of the Balfour Declaration.

Zangwill became the movement’s undisputed leader. After the rejection of the Uganda scheme on the grounds of impracticability by the British, Zangwill turned his attention to settlement in Canada and Australia. But opposition from local residents led him to abandon the scheme. Expeditions were sent to Mesopotamia (Iraq), Cyrenaica (Libya), and Angola but little came of these expeditions.

A project that had some concrete success was the Galveston scheme which contemplated the settlement of Jews in the American Southwest, in particular in Texas. The project received the assistance of Jacob Schiff, the American Jewish banker, and some 9,300 Jews arrived in that area between 1907-1914, through the Emigration Bureau of the Territorialist organization.

With the publication of the Balfour Declaration, the ITO faced a severe crisis since many of its members came to the conclusion that Eretz-Israel was not so utopian after all. The organization’s failure was due to its inability to secure a definite project, and its lack of sensitivity toward the historic and traditional sentiments of Jewish identity.