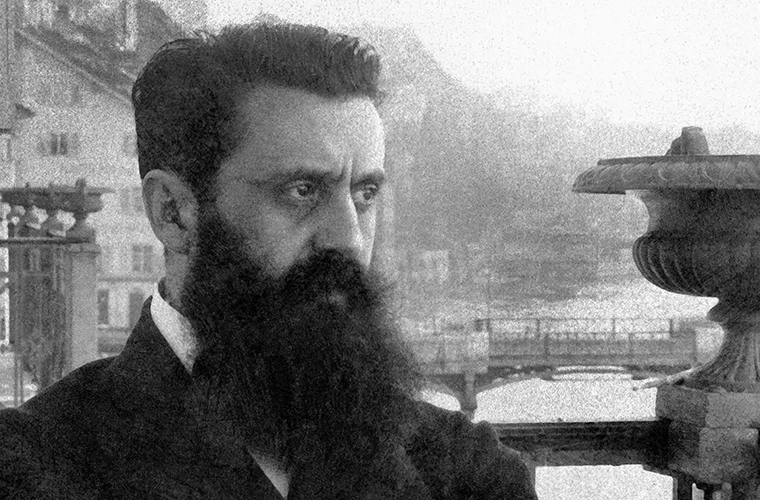 Theodor Herzl, (born May 2, 1860, Budapest, Hungary, Austrian Empire [now in Hungary]—died July 3, 1904, Edlach, Austria), founder of the political form of Zionism, a movement to establish a Jewish homeland. His pamphlet The Jewish State (1896) proposed that the Jewish question was a political question to be settled by a world council of nations. He organized a world congress of Zionists that met in Basel, Switzerland, in August 1897 and became the first president of the World Zionist Organization, established by the congress. Although Herzl died more than 40 years before the establishment of the State of Israel, he was an indefatigable organizer, propagandist, and diplomat who had much to do with making Zionism into a political movement of worldwide significance.

Early years
Herzl was born to well-to-do middle-class parents. He first studied in a scientific secondary school, but, to escape from its anti-Semitic atmosphere, he transferred in 1875 to a school where most of the students were Jews. In 1878 the family moved from Budapest to Vienna, where he entered the University of Vienna to study law. He received his license to practice law in 1884 but chose to devote himself to literature. For a number of years, he was a journalist and a moderately successful playwright.

In 1889 he married Julie Naschauer, daughter of a wealthy Jewish businessman in Vienna. The marriage was unhappy, although three children were born to it. Herzl had a strong attachment to his mother, who was unable to get along with his wife. These difficulties were increased by the political activities of his later years, in which his wife took little interest.

Conversion to Zionism
A profound change began in Herzl’s life soon after a sketch he had published in the leading Viennese newspaper, Neue Freie Presse, which led to his appointment as the paper’s Paris correspondent. He arrived in Paris with his wife in the fall of 1891 and was shocked to find in the homeland of the French Revolution the same anti-Semitism with which he had become so familiar in Austria. Hitherto he had regarded anti-Semitism as a social problem that the Jews could overcome only by abandoning their distinctive ways and assimilating to the people among whom they lived. At the same time, his work as a newspaperman heightened his interest in, and knowledge of, social and political affairs and led him to the conviction that the answer to anti-Semitism was not assimilation but organized counterefforts by the Jews. The Dreyfus affair in France also helped crystallize this belief. French military documents had been given to German agents, and a Jewish officer named Alfred Dreyfus had been falsely charged with the crime. The ensuing political controversy produced an outburst of anti-Semitism among the French public. Herzl said in later years that it was the Dreyfus affair that had made a Zionist out of him. So long as anti-Semitism existed, assimilation would be impossible, and the only solution for the majority of Jews would be organized emigration to a state of their own.

Herzl was not the first to conceive of a Jewish state. Orthodox Jews had traditionally invoked the return to Zion in their daily prayers. In 1799 Napoleon had thought of establishing a Jewish state in the ancient lands of Israel. The English statesman Benjamin Disraeli, a Jew, had written a Zionist novel, Tancred. Moses Hess, a friend, and coworker of Karl Marx had published an important book, Rom und Jerusalem (1862), in which he declared the restoration of a Jewish state a necessity both for the Jews and for the rest of humanity. Among the Jews of Russia and eastern Europe, a number of groups were engaged in trying to settle emigrants in agricultural colonies in Palestine. After the Russian pogroms of 1881, Leo Pinsker had written a pamphlet, “Auto-Emanzipation,” an appeal to western European Jews to assist in the establishment of colonies in Palestine. When Herzl read it some years later, he commented in his diary that, if he had known of it, he might never have written The Jewish State.

Herzl’s first important Zionist effort was an interview with Baron Maurice de Hirsch, one of the wealthiest men of his time. De Hirsch had founded the Jewish Colonization Association with the aim of settling Jews from Russia and Romania in Argentina and other parts of the Americas. The 35-year-old journalist arrived at the baron’s mansion in Paris with 22 pages of notes, in which he argued the need for a political organization to rally the Jews under a flag of their own, rather than leaving everything to the philanthropic endeavors of individuals like the baron. The conversation was notable for its effect on Herzl rather than on the baron de Hirsch, who refused to hear him out. It led to Herzl’s famous pamphlet The Jewish State, published in February 1896 in Vienna. The Jewish question, he wrote, was not a social or religious question but a national question that could be solved only by making it “a political world question to be discussed and settled by the civilized nations of the world in council.” Some of Herzl’s friends thought it a mad idea, but the pamphlet won favorable responses from eastern European Zionist societies. In June 1896, when Herzl was en route to Constantinople (Istanbul) in the hope of talking to the Ottoman sultan about obtaining the grant of Palestine as an independent country, his train stopped in Sofia, Bulgaria, and hundreds of Jews were present at the station to greet Herzl and to hail him as a leader. Although he remained in Constantinople for 11 days, he failed to reach the sultan. But he had begun the career as an organizer and propagandist that would end only with his death eight years later.

The First Zionist Congress
Herzl went to London in an effort to organize the Jews there in support of his program. Not all the Jewish leaders in England were happy to see him because his political approach was not in tune with their ideas, but at public meetings in the East End, he was loudly cheered. He was a tall, impressive figure with a long black beard and the mien of a prophet. Despite his personal magnetism, he found that his efforts to influence Jewish leaders in England were of little avail and therefore decided to organize a world congress of Zionists in the hope of winning support from the masses of Jews in all countries. He proposed to hold the congress in Munich, but, as the Jews there—who were mostly assimilated—opposed it, he settled upon Basel. The congress met at the end of August 1897, attended by about 200 delegates, mostly from central and eastern Europe and Russia along with a few from Western Europe and even the United States. They represented all social strata and every variety of Jewish thought—from Orthodox Jews to atheists and from businessmen to students. There were also several hundred onlookers, including some sympathetic Christians and reporters for the international press. When Herzl’s imposing figure came to the podium, there was tumultuous applause. “We want to lay the foundation stone,” he declared, “for the house which will become the refuge of the Jewish nation. Zionism is the return to Judaism even before they return to the land of Israel.” One of Herzl’s most faithful supporters was the writer Max Nordau, who gave a brilliant address in which he described the plight of the Jews in the East and in the West. The three-day congress agreed upon a program, henceforth to be known as the Basel Program, declaring Zionism’s aspiration “to create a publicly guaranteed homeland for the Jewish people” in Palestine. It also set up the Zionist Organization with Herzl as president.

Later accomplishments
The seven remaining years of his life were devoted to the furtherance of the Zionist cause, although he remained literary editor of the Neue Freie Presse in order to earn a living. He established a Zionist newspaper, Die Welt, published as a German-language weekly in Vienna. He negotiated unsuccessfully with the sultan of Turkey for the grant of a charter that would allow Jewish mass settlement in Palestine on an autonomous basis. He then turned to Great Britain, which seemed favorable to the establishment of a Jewish settlement in British territory in the Sinai Peninsula. When this project failed, the British proposed Uganda in East Africa. This offer, which he and some other Zionists were willing to accept, aroused violent opposition at the Zionist congress of 1903, particularly among the Russians. Herzl was unable to resolve the conflict. He died of a heart ailment at Edlach, near Vienna, at the age of 44. He was buried in Vienna, but, in accordance with his wish, his remains were removed to Jerusalem in 1949 after the creation of the Jewish state and entombed on a hill west of the city now known as Mount Herzl.

After the First Zionist Congress in Basel, Herzl had written in his diary:

If I had to sum up the Basel Congress in one word—which I shall not do openly—it would be this: At Basel, I founded the Jewish state. If I were to say this today, I would be greeted by universal laughter. In five years, perhaps, and certainly in 50, everyone will see it.

While the Jewish state was the product of many complex historic forces, including two world wars and the labors of Herzl’s many followers, it was he who organized the political force of Jewry that was able to take advantage of the accidents of history. Through the strength of his personality, he aroused the enthusiasm of the Jewish masses and gained the respect of many statesmen of his time, in spite of the opposition of some Jewish leaders to his plans.