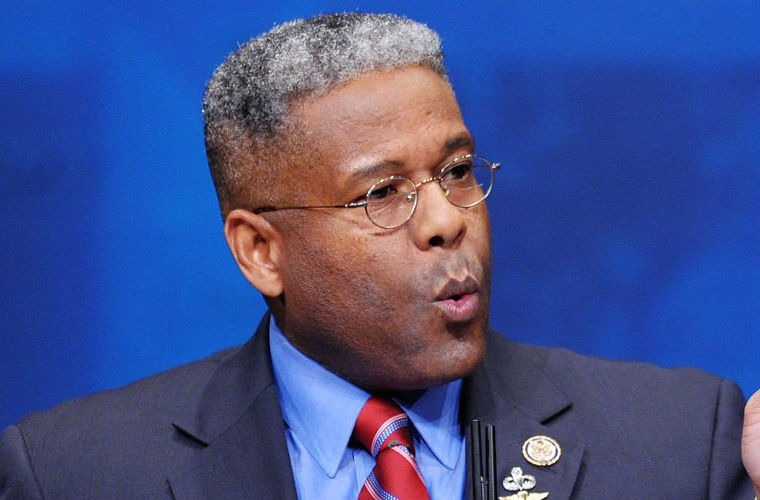 Allen West was born on February 7, 1961, in Atlanta, Fulton County, Georgia, to Herman and Elizabeth West, and grew up in Atlanta’s inner city. West grew up in a culture of military service — his father and older brother served in combat in World War II and Vietnam, respectively. West’s mother worked as a civilian employee for the Marine Corps. He joined the Junior Reserve Officers’ Training Corps (J-ROTC) in 10th grade before graduating from Henry W. Grady High School in Atlanta. West joined the Reserve Officers’ Training Corps (ROTC) while attending the University of Tennessee in Knoxville, where he earned a bachelor’s degree in 1983. West then began United States Army officer training and earned two master’s degrees, a political science degree from Kansas State University in Manhattan, Kansas, and a military arts degree from the U.S. Army Command and General Staff College. In 1989, he married Angela M. Graham, a financial planner, with whom he had two daughters.

After joining the Army, West served in Italy, South Korea, and the Middle East—including service in the Gulf War in 1991. West returned to Kansas State University to serve as an ROTC instructor until 1994. After spending much of the next decade at Camp Lejeune in Jacksonville, North Carolina, West was deployed to Iraq in 2003. During his more than 20 years of service, he was awarded the Bronze Star and three Meritorious Service Medals. He retired from the army in 2004, at the rank of lieutenant colonel. West worked as a high school teacher and coach for a year before taking a position advising the Afghan military in Kandahar, Afghanistan. Having attracted significant attention from national Republicans through his military service, he returned to Florida in 2008, to seek political office for the first time.

West first ran for office in 2008 against Democratic Representative Ron Klein of Florida in a district that encompassed the southeastern tip of the Florida peninsula. Returning to the United States from Afghanistan late in the fundraising cycle, West was unable to match the established incumbent. He received 45.3 percent of the vote in a moderate district. He increased his visibility as the 2010 midterm elections approached, gaining support from conservative Republicans affiliated with the Tea Party movement. West challenged Klein again as public frustration mounted with the state of the economy; he raised considerable funds from national organizations. He defeated Klein in 2010 in a near reverse of the 2008 results, winning by a margin of 54.4 to 45.6 percent. Along with Representative Tim Scott of South Carolina, West was one of the first African-American Republican Congressmen since J. C. Watts of Oklahoma (1995–2003).

Elected to the 112th Congress (2011–2013), West declared himself a defender of conservative values. As an example of his effort to reach out to divergent groups within Washington, he joined both the Tea Party Caucus and Congressional Black Caucus (CBC). “I think you need to have competing voices in that body,” West said of his decision to join the otherwise entirely Democratic CBC. West served on the Armed Services and Small Business Committees. Much of his legislative agenda focused on protecting the nation’s armed forces and reforming the tax code. He frequently voted with his fellow Republican freshmen on fiscal policies important to the Tea Party faction of Republicans. West’s spirited speeches and bold conservative rhetoric made him a sensation among conservatives. “I tell the truth and I stand on convictions and you know what you’re getting,” he said of his burgeoning national reputation.

After Florida’s redistricting took effect in early January 2012, West’s district in the Boca Raton area along the Atlantic coast was drawn more favorable to Democrats. West decided to seek re-election in the slightly more conservative neighboring coastal district to the north. Local businessman and Democratic candidate Patrick Murphy planned to challenge West in his original district and followed West north after the switch. Murphy defeated West by 50.3 percent to 49.7 percent, a margin of fewer than 2,000 votes. Though the margin was not small enough to trigger an automatic recount, West’s campaign filed an injunction to impound voting machines and paper ballots in Palm Beach and St. Lucie Counties due to what it described as “disturbing irregularities” in the voting process. Following two weeks of legal actions, West conceded on November 20, 2012. In his concession, West stated, “I have dedicated my life to serving this nation, and the results of this election will not change my purpose. Just as I did in the deserts of Iraq and Afghanistan, just as I did on Capitol Hill, I will continue to fight for our Republic.”