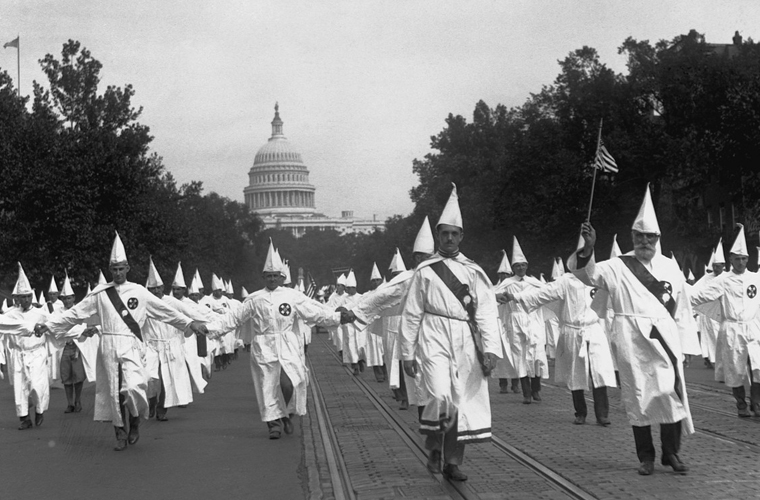 Ku Klux Klan is either of two distinct U.S. hate organizations that have employed terror in pursuit of their white supremacist agenda. One group was founded immediately after the Civil War and lasted until the 1870s; the other began in 1915 and has continued to the present. The 19th-century Klan was originally organized as a social club by Confederate veterans in Pulaski, Tennessee, in 1866. They apparently derived the name from the Greek word kyklos, from which comes the English “circle”; “Klan” was added for the sake of alliteration and Ku Klux Klan emerged.

The organization quickly became a vehicle for Southern white underground resistance to Radical Reconstruction. Klan members sought the restoration of white supremacy through intimidation and violence aimed at the newly enfranchised black freedmen. A similar organization, the Knights of the White Camelia, began in Louisiana in 1867.

In the summer of 1867, the Klan was structured into the “Invisible Empire of the South” at a convention in Nashville, Tennessee, attended by delegates from former Confederate states. The group was presided over by a grand wizard (Confederate cavalry general Nathan Bedford Forrest is believed to have been the first grand wizard) and a descending hierarchy of grand dragons, grand titans, and grand cyclopses. Dressed in robes and sheets designed to frighten superstitious blacks and to prevent identification by the occupying federal troops, Klansmen whipped and killed freedmen and their white supporters in nighttime raids.

The 19th-century Klan reached its peak between 1868 and 1870. A potent force, it was largely responsible for the restoration of white rule in North Carolina, Tennessee, and Georgia. But Forrest ordered it disbanded in 1869, largely as a result of the group’s excessive violence. Local branches remained active for a time, however, prompting Congress to pass the Force Act in 1870 and the Ku Klux Act in 1871.

These bills authorized the president to suspend the writ of habeas corpus, suppress disturbances by force, and impose heavy penalties upon terrorist organizations. Pres. Ulysses S. Grant was lax in utilizing this authority, although he did send federal troops to some areas, suspend habeas corpus in nine South Carolina counties, and appoint commissioners who arrested hundreds of Southerners for conspiracy. In United States v. Harris in 1882, the Supreme Court declared the Ku Klux Act unconstitutional, but by that time the Klan had practically disappeared.

It disappeared because its original objective—the restoration of white supremacy throughout the South—had been largely achieved during the 1870s. The need for a secret antiblack organization diminished accordingly.

The 20th-century Klan had its roots more directly in the American nativist tradition. It was organized in 1915 near Atlanta, Georgia, by Col. William J. Simmons, a preacher, and promoter of fraternal orders who had been inspired by Thomas Dixon’s book The Clansman (1905) and D.W. Griffith’s film The Birth of a Nation (1915). The new organization remained small until Edward Y. Clarke and Elizabeth Tyler brought to it their talents as publicity agents and fundraisers. The revived Klan was fueled partly by patriotism and partly by a romantic nostalgia for the old South, but, more importantly, it expressed the defensive reaction of white Protestants in small-town America who felt threatened by the Bolshevik revolution in Russia and by the large-scale immigration of the previous decades that had changed the ethnic character of American society.

This second Klan peaked in the 1920s when its membership exceeded 4,000,000 nationally, and profits rolled in from the sale of its memberships, regalia, costumes, publications, and rituals. A burning cross became the symbol of the new organization, and white-robed Klansmen participated in marches, parades, and nighttime cross burnings all over the country. To the old Klan’s hostility toward blacks the new Klan—which was strong in the Midwest as well as in the South—added bias against Roman Catholics, Jews, foreigners, and organized labor. The Klan enjoyed the last spurt of growth in 1928, when Alfred E. Smith, a Catholic, received the Democratic presidential nomination.

During the Great Depression of the 1930s, the Klan’s membership dropped drastically, and the last remnants of the organization temporarily disbanded in 1944. For the next 20 years, the Klan was quiescent, but it had a resurgence in some Southern states during the 1960s as civil-rights workers attempted to force Southern communities to comply with the Civil Rights Act of 1964. There were numerous instances of bombings, whippings, and shootings in Southern communities carried out in secret but apparently the work of Klansmen. Pres. Lyndon B. Johnson publicly denounced the organization in a nationwide television address announcing the arrest of four Klansmen in connection with the slaying of a civil-rights worker, a white woman, in Alabama.

The Klan was unable to stem the growth of a new racial tolerance in the South in the years that followed. Though the organization continued some of its surreptitious activities into the early 21st century, cases of Klan violence became more isolated, and its membership had declined to a few thousand. The Klan became a chronically fragmented mélange made up of several separate and competing groups, some of which occasionally entered into alliances with neo-Nazi and other right-wing extremist groups.