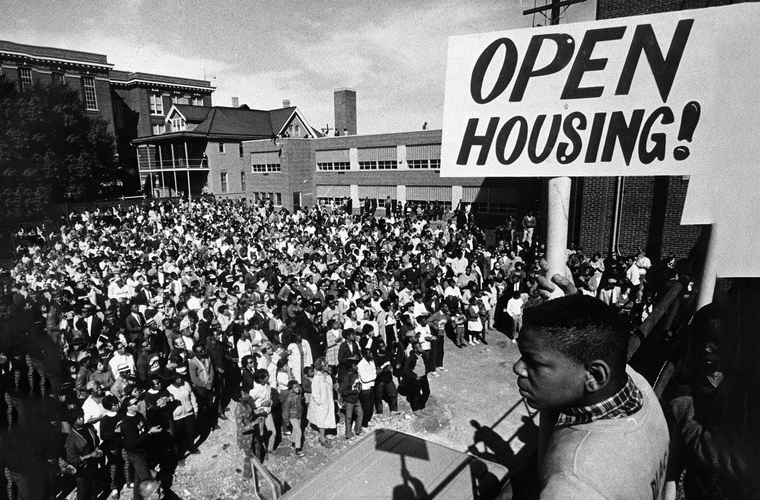 Fair Housing Act, also called Title VIII of the Civil Rights Act of 1968, is U.S. federal legislation that protects individuals and families from discrimination in the sale, rental, financing, or advertising of housing. The Fair Housing Act, as amended in 1988, prohibits discrimination on the basis of race, color, religion, sex, disability, family status, and national origin.

The Fair Housing Act was first put before Congress in 1966, primarily to address issues of racial discrimination in the rental and sale of housing. Over the next two years, members of the House of Representatives and the Senate considered the bill several times, but, on each occasion, it failed to gain the necessary support for passage. One of the bill’s strongest supporters was Martin Luther King, Jr., who had been at the forefront of the open housing marches in Chicago in the 1960s. After King was assassinated on April 4, 1968, President Lyndon B. Johnson encouraged Congress to pass the bill as a memorial to the slain civil rights leader before King’s funeral.

At the same time, the pressure to pass the bill was also being put on the federal government by such organizations as the National Association for the Advancement of Colored People (NAACP), the American GI Forum, and the National Committee Against Discrimination in Housing. Those groups, as well as others, were outraged that the families of African American soldiers who had been killed in Vietnam were facing discrimination in matters related to housing. In the U.S. Congress, Republican Senator Edward Brooke of Massachusetts, the first African American senator since Reconstruction, and Democratic Senator Edward Kennedy, also of Massachusetts, were passionate supporters of the bill. On April 11, 1968, seven days after King’s assassination, Congress finally passed the Fair Housing Act.

The Fair Housing Act protects buyers and renters of housing from discrimination by sellers, landlords, or financial institutions and makes it unlawful for those entities to refuse to rent, sell, or provide financing for a dwelling based on factors other than an individual’s financial resources. The 1968 act prohibited discrimination based on race, religion, and national origin, was expanded in 1974 to include gender, and was expanded again in 1988 to protect people with disabilities and families with children.

Sexual orientation is not covered under the Fair Housing Act, though many states and localities have laws addressing such housing discrimination. The Department of Housing and Urban Development (HUD) is charged with enforcing the Fair Housing Act, and the Office of Fair Housing and Equal Opportunity (FHEO) is charged with investigating complaints of discrimination filed with HUD. The FHEO determines if reasonable cause exists to believe that a discriminatory housing practice has occurred. If reasonable cause is found, a hearing is scheduled before a HUD administrative judge, who determines whether housing discrimination actually occurred. Individuals who discriminate may be fined, though such decisions are subject to review by the U.S. Court of Appeals.