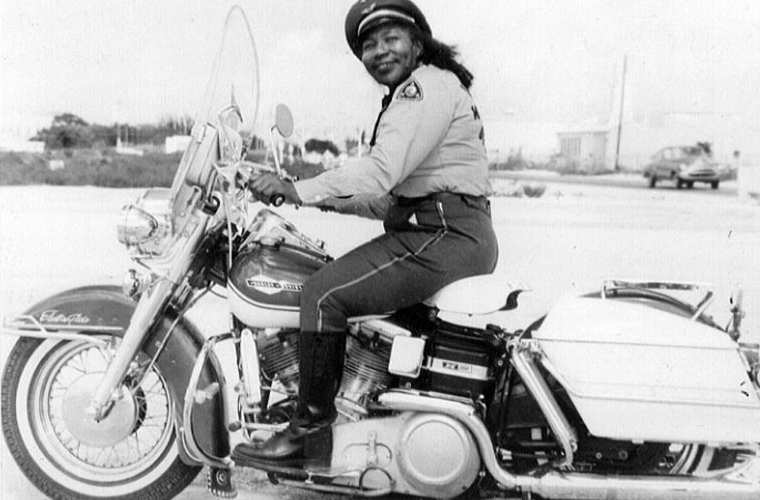 In 1930 Bessie Stringfield became the first African American woman to ride her motorcycle across the United States solo. Her feat was credited with breaking down barriers for both women and African-American motorcyclists.

Born Betsy Leonora Ellis on February 9, 1911, in Kingston, Jamaica, she was the daughter of Maria Ellis, a domestic servant, and James Ferguson, her employer. Betsy and her parents migrated to Boston, Massachusetts but both died of smallpox. Orphaned when Betsy was five years old, she was adopted by a wealthy Irish woman who raised her as a Catholic. It is unclear when and why Bessie rather than Betsy became her given name. On Bessie’s sixteenth birthday, her mother gave her a motorcycle, “even though good girls didn’t ride motorcycles.”

In 1927 Ellis climbed aboard her first bike, an Indian Scout. Although she had no prior knowledge of operating the controls, she started the motorcycle and easily mastered it. Between the 1930s and the early 1940s, Ellis made eight long-distance solo rides across the United States. During this time, she earned money from performing motorcycle stunts in carnival shows. Due to her skin color, Ellis was often denied accommodations while traveling and was forced to sleep on her motorcycle at gasoline stations.

During World War II, Bessie Ellis worked for the U.S. Army as a civilian motorcycle dispatch rider, carrying documents between domestic bases on her Harley-Davidson bike. The only woman in her unit, she completed rigorous training maneuvers including learning how to weave a makeshift bridge from rope and tree limbs to cross swamps. Ellis regularly encountered racial prejudice while on the road. Once she was followed by a man in a pickup truck who deliberately ran her into a ditch, violently knocking her off her bike.

In between her travels, Ellis wed and divorced six times. After she and her first husband were deeply saddened by the loss of three babies, she had no more children. Upon divorcing her third husband, Arthur Stringfield, she said, “He asked me to keep his name because I’d made it famous!”

By the early 1950s, Stringfield ended her motorcycle odysseys across the United States. She bought a house in Miami, Florida, suburb and became a licensed practical nurse. She continued to ride locally, however, and founded the Iron Horse Motorcycle Club. Disguised as a man, Stringfield won a local motorcycle race but was denied the prize money when she took off her helmet. Her other antics, including riding her Harley while standing in its saddle, attracted local press attention. Reporters called Stringfield, the “Negro Motorcycle Queen” at first and then later the “Motorcycle Queen of Miami.” In the absence of children, she found joy in her pet dogs, some of whom paraded with her on her motorcycle.

In 1990 when the American Motorcycle Association (AMA) opened the first Motorcycle Heritage Museum in Pickerington, Ohio, Stringfield was featured in its inaugural exhibit on Women in Motorcycling. Late in life, Stringfield suffered from symptoms caused by an enlarged heart. She died in Opa-laka, Florida, in 1993 at the age of eighty-two.

A decade later, the AMA instituted the Bessie Stringfield Award to honor women who are leaders in motorcycling. In 2002 she was inducted into the Motorcycle Hall of Fame.