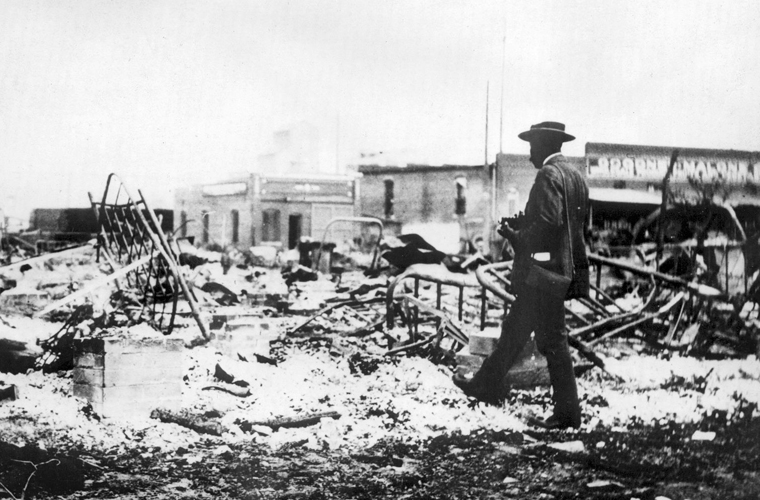 June 1st, 1921 will forever be remembered as a day of great loss and devastation. It was on this day that America experienced the deadliest race riot in the small town of Tulsa, Oklahoma. Ninety-four years later, that neighborhood is still recognized as one of the most prosperous African American towns to date. With hundreds of successful black-owned businesses lining Greenwood Avenue, it became a standard that African Americans are still trying to rebuild. The attack that took place in 1921 tore the community apart, claiming hundreds of lives and sending the once prosperous neighborhood up in smoke.

In the early 1900s, Tulsa, Oklahoma experienced a major oil boom, attracting thousands. Many African Americans migrated from southern states hoping to escape the harsh racial tensions while profiting off of the oil industry. Yet even in Tulsa, Oklahoma, Jim Crow laws were at large, causing the town to be vastly segregated with most African Americans settling in the northern section of the town. From that segregation grew a black entrepreneurial mecca that would affectionately be called “Black Wall Street”. The town was established in 1906 by entrepreneur O.W. Gurley, and by 1921 there were over 11,000 residents and hundreds of prosperous businesses, all owned and operated by black Tulsans and patronized by both whites and blacks.

One of the most prominent entrepreneurs was Lola T. Williams who owned The Dreamland Theatre and a small chain across Oklahoma. The theater seated close to 1,000 people for live musicals, films and more. This was only one of four theaters in the area. Not too far from Mrs. Williams’ theater was the Stradford Hotel on Greenwood Avenue. Owned by J.B. Stradford, it was one of the largest and most successful black-owned hotels at the time. Prior to opening the hotel, Stratford bought large tracts of land in Tulsa and sold them exclusively to blacks, subscribing to the belief that they had the best chance at economic success by pooling their resources and supporting one another’s businesses.

\Greenwood flourished and became a symbol of black wealth, pride, and unity. At its height, the business center boasted of various grocery stores, nightclubs, drug stores, churches, funeral homes, restaurants, banks, hotels, and the likes. The community was completely self-sufficient and became the home of many black multimillionaire entrepreneurs. With this growth and success came envy from white Tulsans. Many of the businesses in Greenwood (which they referred to as “Little Africa”) were more prosperous than those in the white community. Racial and economic tensions soon came to a boil in May 1921.

On May 30th, Dick Rowland, a 19-year-old shoe shiner at a Main Street parlor took the elevator at a nearby building to use the restroom. At the time, the white elevator operator on duty was 17-year-old Sarah Page.

What happened while the two were in the elevator remains unclear, yet it resulted in Page accusing Rowland of sexual assault. Although she never pressed charges, the damage was done. The story made the front page of the Tulsa Tribune with the headline “Nab Negro for attacking a girl in an elevator”, while rumors began circulating that a white lynch mob was searching for Rowland.

The incident further divided the town with one side believing Rowland raped Page and the other holding on to the belief that he simply tripped as he got onto the elevator and grabbed onto Page’s arm as he tried to catch his balance. Hundreds began to gather outside of the county jail that held Rowland. First, a group of armed whites, followed by a group of armed black men fearful of Rowland’s safety and determined to protect him.

What ensued was one of the most devastating riots in American history. An event that can only be characterized as terrorism.
Before dawn, a mob of angry white men stormed into Greenwood armed with guns, some provided by local officers who also participated in the riot. Hundreds of businesses and homes were ransacked and set afire. Black men, some who served in World War I, rallied together and armed themselves, ready to fight for their families and community. Whites indiscriminately shot and killed men, women, and children on foot and by car. As the number of casualties on both sides escalated, airplanes used in World War I was dispatched, firing rifles at residents and dropping fire bombs on the black community.

Outnumbered and outgunned, the riot grew worse for black Tulsans. Countless families began to flee after being trapped between rampant flames and gunfire. By the end of the attack, close to 300 blacks were murdered, while many others were left injured, homeless and held in internment camps by local law enforcement. By 1942, remaining black Tulsans rebuilt Greenwood without any assistance from the state and saw a resurgence of over 240 businesses.

The story of Tulsa’s Black Wall Street remains one of the most inspirational and devastating parts of our history, yet it is still unknown by many. If you would like to learn more about the Tulsa race riots, you can check out: