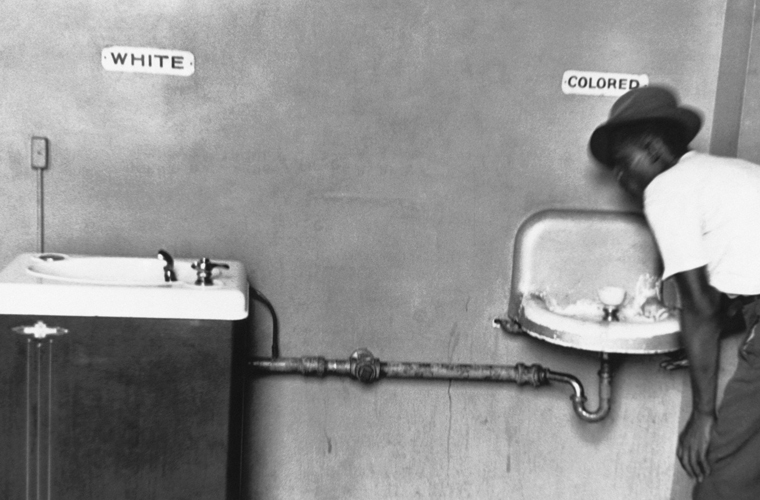 Jim Crow law, in U.S. history, is any of the laws that enforced racial segregation in the South between the end of Reconstruction in 1877 and the beginning of the civil rights movement in the 1950s. Jim Crow was the name of a minstrel routine (actually Jump Jim Crow) performed beginning in 1828 by its author, Thomas Dartmouth (“Daddy”) Rice, and by many imitators, including actor Joseph Jefferson. The term came to be a derogatory epithet for African Americans and a designation for their segregated life.

From the late 1870s, Southern state legislatures, no longer controlled by carpetbaggers and freedmen, passed laws requiring the separation of whites from “persons of color” in public transportation and schools. Generally, anyone of ascertainable or strongly suspected black ancestry in any degree was for that purpose a “person of color”; the pre-Civil War distinction favoring those whose ancestry was known to be mixed—particularly the half-French “free persons of color” in Louisiana—was abandoned. The segregation principle was extended to parks, cemeteries, theatres, and restaurants in an effort to prevent any contact between blacks and whites as equals. It was codified on local and state levels and most famously with the “separate but equal” decision of the U.S. Supreme Court in Plessy v. Ferguson (1896).

In 1954 the Supreme Court reversed Plessy in Brown v. Board of Education of Topeka. It declared segregation in public schools unconstitutional, and, by extension, that ruling was applied to other public facilities. In the years following, subsequent decisions struck down similar kinds of Jim Crow legislation. Prior to the Civil War, the inferior status of slaves had made it unnecessary to pass laws segregating them from white people. Both races could work side by side so long as the slave recognized his subordinate place. In the cities, where most free blacks lived, rudimentary forms of segregation existed prior to 1860, but no uniform pattern emerged. In the North free blacks also labored under harsh restrictions and often found even more-rigid segregation than in the South.

One might have expected the Southern states to have created a segregation system immediately after the war, but that did not happen. In some states, the legislatures imposed rigid separation, but only in certain areas; Texas, for example, required that every train have one car in which all people of color had to sit. The South had had no real system of public education prior to the Civil War, and as the postwar governments created public schools, those were as often as not segregated by race. Nonetheless, New Orleans had fully integrated schools until 1877, and in North Carolina, former slaves routinely sat on juries alongside whites.

In 1877 the Supreme Court ruled in Hall v. DeCuir that states could not prohibit segregation on common carriers such as railroads, streetcars, or riverboats. In the Civil Rights Cases of 1883, the court overturned key elements of the Civil Rights Act of 1875, thereby sanctioning the notion of “separate but equal” facilities and transportation for the races (though it did not use the term separate but equal). Seven years later the court approved a Mississippi statute requiring segregation on intrastate carriers in Louisville, New Orleans & Texas Railway v. Mississippi (1890).

As those cases demonstrated, the court essentially acquiesced in the South’s “solution” to the problems of race relations. From 1887 to 1892 nine states, including Louisiana, passed laws requiring separation on public conveyances, such as streetcars and railroads. Though they differed in detail, most of those statutes required equal accommodations for black passengers and imposed fines and even jail terms on railroad employees who did not enforce them. Five of the states also provided criminal fines or imprisonment for passengers who tried to sit in cars from which their race excluded them. The Louisiana Separate Car Act was passed in July 1890. In order to “promote the comfort of passengers,” railroads had to provide “equal but separate accommodations for the white and colored races” on lines running in the state.