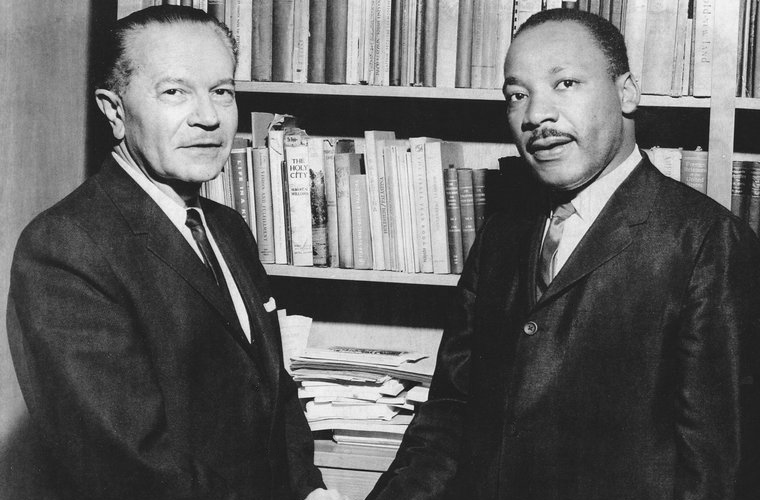 In her 1991 memoir, Deborah, Golda, and Me, Letty Cottin Pogrebin argued that black-Jewish relationships rested on a common history of oppression. “Both blacks and Jews have known Egypt,” she wrote. “Jews have known it as certain death (the killing of the firstborn, then the ovens and gas chambers). Blacks have known it as death and terror by bondage.” Of the many pieties of American Jewry, few have been accepted so readily and widely at face value or have been so influential as the easy assumption that blacks and Jews share vital interests arising out of what the rabbi-historian Arthur Hertzberg termed the “comradeship of excluded peoples.”

Intertwined Fates
Jews have supposed that they, more than any other group, could and did empathize with the plight of blacks and that blacks recognized this. Jewish newspapers early in the twentieth century compared the black movement out of the South to the exodus from Egypt noted that both blacks and Jews lived in ghettos, and described anti-black riots in the South as pogroms. Even European Jews voiced compassion for the American black. Uncle Tom’s Cabin was translated into both Yiddish and Hebrew.

Among Jewish leaders, if not the Jewish man-in-the-street, it became an article of faith that the fates of blacks and Jews were intertwined. Jews were propelled into the civil rights movement by the belief that Jews and blacks shared the same agenda. Jewish spokesmen emphasized that this affinity of Jews toward blacks stemmed not only from idealism but also from self-interest. Jews would benefit the more America moved toward a society of merit in which religious, ethnic, and racial barriers were unimportant. Jewish leaders stressed the similarities rather than the differences between the Jewish and black experiences in America. Both groups, they asserted, were powerless and victims of persecution. Both included in their ranks martyrs to American intolerance.

Black Anti-Semitism
It is precisely because Jews have presumed that blacks and Jews have common interests that they are so disappointed by the reluctance of Jesse Jackson and other black leaders to strongly condemn the anti- Semitic rantings of Louis Farrakhan and his ilk. This disappointment stems not only from the belief that blacks have not shown the proper gratitude for all that Jews have done for them. More important is the fact that black anti-Semitism throws doubt on an important element of the identity of American Jewish liberals and radicals–the presumption that blacks and Jews comprise a community of the oppressed and that Jews are never acting more true to their religious and ethnic heritage than when they are working side by side with blacks to create a society free of racial and religious prejudice.

Jews have continued to call for the maintenance of the black-Jewish alliance despite the socioeconomic differences between the two groups. Leonard Fein, the founder of Moment magazine, has been among the most eloquent spokesman for this position. In his 1988 book Where Are We? In the Inner Life of America’s Jews, Fein admitted that American Jews were no longer among the oppressed. Nevertheless, Jews should continue to identify with blacks because of “our continuing need to see ourselves among the miserable-or, at least, the still- threatened.” The involvement of Jews in the civil rights movement, Fein concluded, “has helped preserve our sense of ourselves as still, and in spite of all the successes we’ve known, among the oppressed, hence also among the decent, the just, the virtuous.”

A Short History
Even a cursory examination of the history of black-Jewish relations in the United States reveals that they were never as warm as Pogrebin and Fein would have us believe, nor are they today as frigid as alarmists claim.

The myth of black-Jewish identity mistook the nature of black-Jewish relations and the attitude of blacks toward Jews. It is true that in a variety of ways blacks ever since the time of slavery have modeled their lives on the Jewish experience. As indicated by black spirituals such as “Go Down, Moses,” blacks drew parallels between their own situation in the South and that of the Jews in Egypt. Just as Jews escaped from slavery and, in the process, inflicted punishment on their taskmasters, so blacks anticipated flight from slavery and the chastisement of the South. The popularity of “Zion” in the names of black churches shows the extent to which the experience of the exodus resonated among blacks. Black nationalists used the Zionist movement as a model for their own back-to-Africa movement. Finally, blacks used the example of the upward social and economic mobility and bourgeois values of Jews as a model for their own people. For groups such as the Black Jews of Harlem, this admiration for Jews led to syncretic religious cults containing Jewish elements.

Despite, however, what affinity they might have felt to Jews, blacks believed that there was still a vast racial gulf separating the two groups. No matter how much Jews did for blacks, in black eyes, Jews were whites with all the privileges accruing to those with white skins. For blacks, the great fault line in America was not between the oppressors and the oppressed, including Jews, but between those with white skins and those with black skins. The rapid decline of American anti-Semitism after 1945 combined with the nation’s continuing pervasive racism was proof to blacks, if they needed any such proof, that the condition of American Jews bore little resemblance to that of blacks.

Even during the first two decades after World War II-the supposed “golden age” of black-Jewish relations-James Baldwin, Kenneth Clark, and other blacks warned liberal Jews that their image of a close black- Jewish affinity was a fiction of their imagination, and that candor and realism were now required. The constant advice to blacks to look to the Jewish experience as a model exacerbated the problem. That advice assumed that if Jews could make it in American society then presumably so could black, but this assumption ignored the crucial fact that Jews were white.

The problems between Jews and blacks, however, go much deeper. American Jews, whatever their problems with prejudice, never experienced anything remotely resembling the enslavement, discrimination, and racism encountered by blacks, while blacks, whatever their gains in status, never experienced the economic and social prosperity of Jews. Blacks and Jews derived different lessons from American history. “The Jewish travail occurred across the sea and America rescued him from the house of bondage,” Baldwin wrote in 1967. “But America is the house of bondage for the Negro, and no country can rescue him.” Their own experience convinced Jews that America was an open society in which education and merit would eventually win out. Hence their firm opposition to affirmative action. History, however, suggested to blacks that American society was irredeemably stacked against them and that something more than the merit principle was necessary if the legacy of three and a half centuries of racism was to be overcome.

Today’s Challenges
While the major problem facing America’s Jews today is maintaining Jewish identity in the midst of affluence, acculturation, and declining anti-Semitism, the major problems facing most blacks are the more immediate ones of economic survival, family breakdown, and continuing racial prejudice. If the comradeship of Jews and blacks as victims was not a mirage in times past, it certainly is one today.

The fact is that on a whole host of issues the interests of Jews and blacks diverge, and there is nothing unusual or surprising about this. It is demeaning to both blacks and Jews to argue that each must reflexively support the other’s agenda in order to avoid antagonisms. As Michael Meyers, a black leader in New York City, recently asserted, Jews should face “the tough realities”: “It’s true that Jews and Blacks have been allies, but we’ve also been rivals. To many Jews racial quotas are affirmative action must be distinguished from exclusionary quotas. We have rivalry about housing. . . . We have disagreements about how and where there are double standards in the criminal justice system.” Meyers could also have added that Jews and blacks have disagreed as well over Jesse Jackson, Israel, and multiculturalism.

Two centuries ago George Washington in his Farewell Address laid down the standards by which the United States should conduct itself with other nations. Washington’s advice–above all that honesty is the best policy–is equally applicable to relations between blacks and Jews.