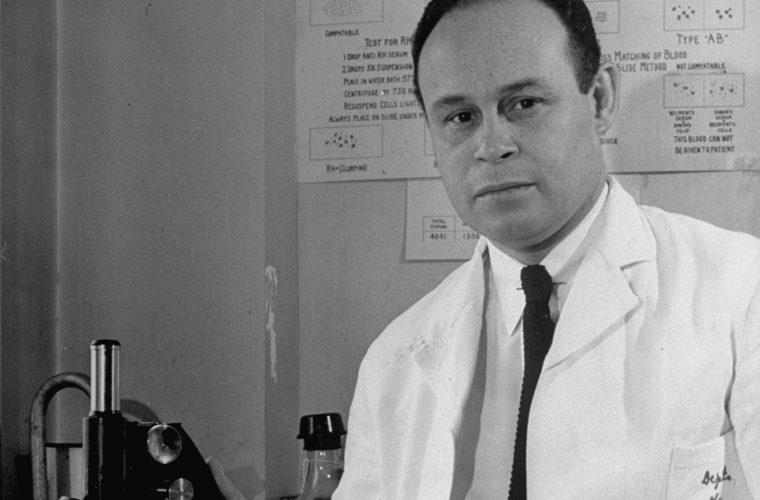 Charles Richard Drew was born on June 3, 1904, in Washington, D.C. He was an African-American physician who developed ways to process and store blood plasma in “blood banks.” He directed the blood plasma programs of the United States and Great Britain in World War II but resigned after a ruling that the blood of African-Americans would be segregated. He died on April 1, 1950.

A pioneering African-American medical researcher, Dr. Charles R. Drew made some groundbreaking discoveries in the storage and processing of blood for transfusions. He also managed two of the largest blood banks during World War II.

Drew grew up in Washington, D.C. as the oldest son of a carpet layer. In his youth, Drew showed great athletic talent. He won several medals for swimming in his elementary years and later branched out to football, basketball, and other sports. After graduating from Dunbar High School in 1922, Drew went to Amherst College on a sports scholarship. There, he distinguished himself on the track and football teams.

Drew completed his bachelor’s degree at Amherst in 1926 but didn’t have enough money to pursue his dream of attending medical school. He worked as a biology instructor and a coach for Morgan College, now Morgan State University, in Baltimore for two years. In 1928, he applied to medical schools and enrolled at McGill University in Montreal, Canada.

At McGill University, Drew quickly proved to be a top student. He won a prize in neuroanatomy and was a member of the Alpha Omega Alpha, a medical honor society. Graduating in 1933, Drew was second in his class and earned both Doctor of Medicine and Master of Surgery degrees. He did his internship and residency at the Royal Victoria Hospital and the Montreal General Hospital. During this time, Drew studied with Dr. John Beattie, and they examined problems and issues regarding blood transfusions.

After his father’s death, Drew returned to the United States. He became an instructor at Howard University’s medical school in 1935. The following year, he did a surgery residence at Freedmen’s Hospital in Washington, D.C., in addition to his work at the university.

In 1938, Drew received a Rockefeller Fellowship to study at Columbia University and train at the Presbyterian Hospital in New York City. There, he continued his exploration of blood-related matters with John Scudder. Drew developed a method for processing and preserving blood plasma or blood without cells. Plasma lasts much longer than whole blood, making it possible to be stored or “banked” for longer periods of time. He discovered that the plasma could be dried and then reconstituted when needed. His research served as the basis of his doctorate thesis, “Banked Blood,” and he received his doctorate degree in 1940. Drew became the first African-American to earn this degree from Columbia.

As World War II raged in Europe, Drew was asked to head up a special medical effort known as “Blood for Britain.” He organized the collection and processing of blood plasma from several New York hospitals, and the shipments of these life-saving materials overseas to treat causalities in the war. According to one report, Drew helped collect roughly 14,500 pints of plasma.

In 1941, Drew spearheaded another blood bank effort, this time for the American Red Cross. He worked on developing a blood bank to be used for U.S. military personnel. But not long into his tenure there, Drew became frustrated with the military’s request for segregating the blood donated by African Americans. At first, the military did not want to use blood from African Americans, but they later said it could only be used for African-American soldiers. Drew was outraged by this racist policy, and resigned from his post after only a few months.

After creating two of the first blood banks, Drew returned to Howard University in 1941. He served as a professor there, heading up the university’s department of surgery. He also became the chief surgeon at Freedmen’s Hospital. Later that year, he became the first African-American examiner for the American Board of Surgery.

In 1944, the National Association for the Advancement of Colored People honored Drew with its 1943 Spingarn Medal for “the highest and noblest achievement” by an African-American “during the preceding year or years.” The award was given in recognition of Drew’s blood plasma collection and distribution efforts.

For the final years of his life, Drew remained an active and highly regarded medical professional. He continued to serve as the chief surgeon at Freedmen’s Hospital and a professor at Howard University. On April 1, 1950, Drew and three other physicians attended a medical conference at the Tuskegee Institute in Alabama. Drew was behind the wheel when his vehicle crashed near Burlington, North Carolina. His passengers survived but Drew succumbed to his injuries. He left behind his wife, Minnie, and their four children.

Drew was only 45 years old at the time of his death, and it is remarkable how much he was able to accomplish in such a limited amount of time. As the Reverend Jerry Moore said at Drew’s funeral, Drew had “a life which crowds into a handful of years’ significance, so great, men will never be able to forget it.”

Since his passing, Drew has received countless posthumous honors. He was featured in the United States Postal Service’s Great Americans stamp series in 1981, and his name appears on educational institutions across the country.