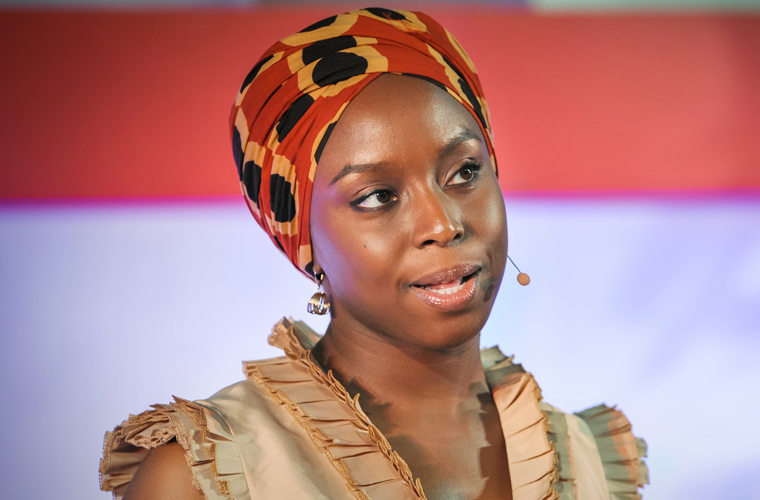 Novelist and feminist campaigner Chimamanda Ngozi Adichie was born in 1977 to a middle-class Igbo family in Enugu, Nigeria. Her mother became the first female registrar at the University of Nigeria, while her father was a professor of statistics there. The fifth of six children, she lived what she describes as a ‘very happy childhood, full of laughter and love, in a very close-knit family.’

Pressured by social and familial expectations, Adichie ‘did what I was supposed to do’ and began to study medicine at the University of Nigeria. After a year and a half, she decided to pursue her ambitions as a writer, dropped out of medical school and took up a communication scholarship in the US. From day one, she became alert to racial generalizations, having to address the ‘story of catastrophe’ perspective her American room-mate had of the entire African continent.

Leaving Nigeria made me much more aware of being Nigerian and what that meant. It also made me aware of race as a concept, because I didn’t think of myself as black until I left Nigeria.

Adichie’s three novels all focus on contemporary Nigerian culture, its political turbulence and at times, how it can intersect with the West. She published Purple Hibiscus in 2003, Half of a Yellow Sun in 2006 and Americanah in 2013. Each time, she manages to give any amateur a lesson in the recent history of Nigeria. Not simply the history one could peer into a dusty tome for, but one showing us the country’s diverse cultures, its personal stories, its idioms, its futures.

Half of a Yellow Sun is set during the Nigeria-Biafra War (1967-1970) in which the Igbo people – an ethnic group of southern Nigeria – sought to establish an independent republic. Adichie chose three unlikely characters to narrate the story: a young houseboy, a woman professor and an English writer who identifies as Biafran. The reader is consequently required to assess narratives of class, gender, race and overall ‘belonging’ throughout. Criticism of Western colonialism and its aftershocks are demonstrated through the conflicted white journalist Richard. He laments to Western journalists that ‘one hundred dead black people equal one dead person’ and is later urged to write about the war because ‘[the West] will take what you write more seriously because you are white.’ This makes a powerful critique of the stories we listen to and why. Adichie herself commented that ‘I wanted to make a strongly-felt political point about who should be writing the stories of Africa.’

Although her novels and wider writings are the best windows into Adichie’s incisive and emotive imagination, she has delivered several impressive talks that get to the heart of their subject. They broadly encompass race and gender, and our tendency to accept what we are taught without recognizing ingrained prejudice. Her 2009 lecture, The Danger of a Single Story, is a brilliant discussion of race, but her argument is cleverly applicable across much broader contexts. This is where she spoke of her room-mate in the US having a preconceived idea of who she, a Nigerian, would be: ‘In this single story, there was no possibility of Africans being similar to her the roommate in any way, no possibility of feelings more complex than pity, no possibility of a connection as human equals.’ In this lecture, her discussion of US perceptions of Mexicans as the ‘abject immigrant’ during the early 2000s, could just as easily be transferred to our current hysteria about Syrian refugees entering Europe.

Adichie’s 2013 lecture We Should All Be Feminists discusses the damaging paradigms of femininity and masculinity. ‘We teach girls to shrink themselves, to make themselves smaller. We say to girls, “You can have ambition, but not too much. You should aim to be successful, but not too successful, otherwise, you would threaten the man.”‘

Adichie argues that Feminism should not be an ‘elite little cult’ but a ‘party full of different feminisms.’ It feels a particularly important message to take to heart – we are imperfect, we are attempting to unlearn what we have unconsciously learned and simultaneously discovering new ways of seeing. As she notes so beautifully, ‘Stories matter. Many stories matter. Stories have been used to dispossess and to malign, but stories can also be used to empower and to humanize. Stories can break the dignity of a people, but stories can also repair that broken dignity.’