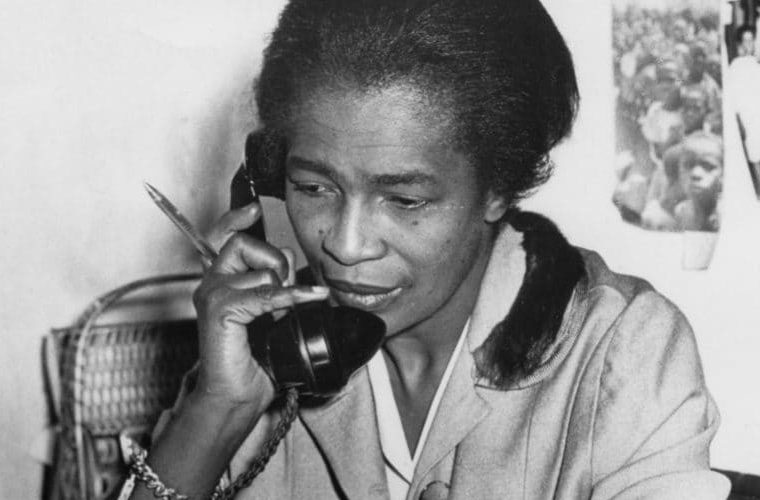 With the birth name of Claudia Cumberbatch, Claudia Jones was born on February 21, 1915, in Port-of-Spain, Trinidad. Her family migrated to the United States in 1924 and became residents of Harlem, New York. Claudia’s mother was a garment worker and due to the effects of harsh working conditions and overwork, she died when Claudia was twelve years old. Ultimately poverty overcame the family and young Claudia eventually dropped out of high school.

While Jones’s formal education came to an end, her actual education did not terminate. Instead, she found a political education in social activism. At the age of 18, Jones became a member of the Young Communist League (YCL). It was at this juncture that Jones became involved in the international movement to defend the Scottsboro Boys. Charged with raping two white women in Scottsboro, Alabama, nine young African American men faced execution in the form of legalized lynching. Jones wrote on the behalf of the Scottsboro Boys’ legal defense as a journalist for the YCL journal Weekly Review. Later she wrote for the Communist Party newspaper The Daily World.

Claudia Jones was a Communist for her entire adult life and a leader in several major movements that marked the twentieth century. These included: the African American liberation movement in the United States, the international Communist movement, the struggle for the rights of women, the battle for world peace, and the Caribbean fight for independence and unity.

Jones’s consistent stand against exploitation and oppression and her advocacy of socialism and world peace did not go unnoticed by the United States Government during the McCarthy era. Jones was arrested in 1948 and incarcerated for six months. She was arrested again in 1955 and subsequently sent to Federal prison. Since she never gained U.S. citizenship, Jones was deported from the United States to England where she immediately became involved in the various struggles of the West Indian community and other nationally oppressed groups. Claudia Jones died on Christmas Day, 1964. Quite fittingly Claudia Jones is buried in Highgate Cemetery next to the grave of Karl Marx.