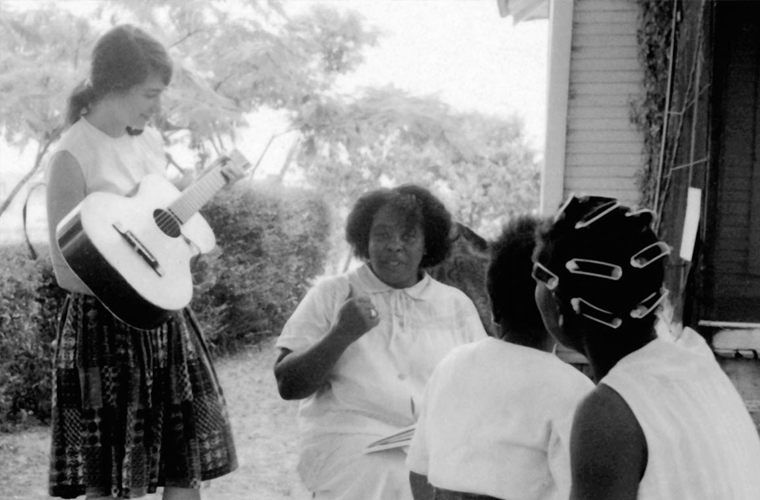 Nowhere did Jews identify themselves more forth­rightly with the liberal avant-garde than in the Civil Rights movement of the 1960s. It was an uneven identification. For Jews living in the South, the issue of racial integration posed unsettling questions. They constituted barely one percent of the region’s total population. Among their white neighbors, they had long been accepted as “honorary white Protestants.”

Even Senator Theodore Bilbo of Mississippi was prepared to draw distinctions between Northern Jews and “good” Southern Jews. The latter were circumspect, in any case, unprepared to question the South’s social order.

But in 1954 that social order was challenged head-on. It was then that the United States Supreme Court rendered its judgment in Brown v. Board of Education, striking down racial segregation in public schools. Within the next dozen years, as a series of federal laws and court orders shattered every legal support of racial segregation, Southern Jews faced an agony of indecision. A very small number responded by joining the ardent segregationists. They were entirely atypical of Jews even in the Deepest South.

Black-Jewish Relations in the South

As far back as the 19th century, Jewish storekeepers were virtually the only Southern merchants who addressed black customers as “Mr.” and “Mrs.” and permitted them to try on clothing. By the early 20th century, a few Southern Jews even ventured to speak out against the evils of white supremacy. In 1929, Louis Isaac Jaffe, editorial writer for the Norfolk Virginia-Pilot won the Pulitzer Prize for his denunciation of lynching and the reactionary Harry Byrd political machine.

Julius Rosenwald chairman of Sears Roebuck, contributed more generously in behalf of Southern blacks than did any philanthropist in American history. Rosenwald was Chicagoan, but his munificence was continued by his daughter, Edith Stern of New Orleans, whose Stern Family Fund in later years contributed vast sums to civil rights activities in the South. It was known, too, that Southern Jews privately tended to be more liberal on the race issue than Southern gentiles, and often quietly provided manpower and funds for civil rights causes.

Yet, away from large, modern cities like Atlanta and New Orleans, Southern Jews felt obliged to walk a narrow line. Most were merchants, dependent on the goodwill of their neighbors. In the Deep South, if they hesitated to join White Citizens Councils, they felt the pressure immediately. “The money dried up at the banks and loans were called in,” recalled a Jewish storekeeper “If you had a restau­rant, linen was not picked up. If you owned a store, the local police could play havoc with you on the fire laws.”

Most local Jews then tended to adopt a low profile on the race issue. At the express wish of their congregations, a majority of Southern rabbis similarly agreed to be restrained. No more than six or seven of them in the entire South worked openly to promote the cause of civil rights. But, of these, Rabbi Julian Feibelman of New Orleans opened the doors of his Temple Sinai in 1949 for a lecture by Ralph Bunche, the black United Nations ambassador, permitting the first major integrated audience in New Orleans history.

At the height of the anti-integration effort, in 1957, Rabbi Ira Sanders of Little Rock testified before the Arkansas Senate against pending segregationist bills. Rabbi Perry Nussbaum of Jack­son, Mississippi, also courageously lent his support to the integration effort, as did Rabbis Jacob Rothschild of Atlanta, Emmet Frank of Alexandria, and Charles Mantinband of Birmingham. Yet these men stood well ahead of their constituencies.

If Southern Jews believed that a low profile would permit them to continue living peacefully, they were wrong. Klan groups exploited the integration crisis to launch acts of anti-Semitic violence. In one year, from November 1957 through October 1958, temples and other Jewish communal edifices were bombed in Atlanta, Nashville, Jack­sonville, and Miami, and undetonated dynamite was found under synagogues in Birmingham, Charlotte, and Gastonia, North Carolina. Some rabbis received telephone death threats.

No one was injured, and local and state authorities in every instance joined newspapers and communal leaders in condemning the outrages and in tracking down, prosecuting, and convicting the perpetrators. Much of the South was urbanizing and modernizing, after all. But an older residue of folkloristic suspicion evidently survived even against veteran, local Jews.

More than any other factor, it was the participation of Northern Jews in the Civil Rights movement that tapped that residue. These were the people, it is recalled, who were the earliest supporters of the fledgling National Association for the Advancement of Colored People. In 1914, Professor Emeritus Joel Spingarn of Columbia University be­came chairman of the NAACP and recruited for its board such Jewish leaders as Jacob Schiff, Jacob Billikopf, and Rabbi Stephen Wise.

Jews also were the earliest supporters of the Urban League, founded in New York in 1911 to help newly arrived black migrants from the rural South. The International Ladies Garment Workers Union and the Amal­gamated Clothing Workers took the lead in organizing “our black brothers” for union membership (over the opposition of the American Federation of Labor national board). And, in the climactic civil rights drives of the 1950s and 1960s, Jewish participation was all but overwhelming.

In the landmark 1954 Brown v. Board of Education ruling itself, the Supreme Court accepted the research of the black sociologist Kenneth Clark that segregation placed the stamp of inferi­ority on black children. Clark’s study had been commissioned by the American Jewish Committee, and it appeared in the amicus curiae brief the Committee submitted to the court. The Anti-Defamation League and the American Jewish Congress also submitted amicus curiae briefs in behalf of the cause. Once the judgment was issued, these Jewish defense organizations continued to file legal briefs in civil rights cases dealing with housing, employment, education, and public accommodation. Many local and state desegregation regula­tions actually were drafted in the offices of the Jewish agencies.

Jewish participation in the Civil Rights movement far transcended institutional associations. One black leader in Mississippi es­timated that, in the 1960s, the critical decade of the voter-registration drives, “as many as 90 percents of the civil rights lawyers in Mississippi were Jewish.” Large numbers of them were recent graduates of Ivy League law schools. They worked around the clock analyzing wel­fare standards, the bail system, arrest procedures, justice-of-the-peace rulings. Racing from one Southern town to another, they obtained parade permits and issued complaints on jail beatings and intimida­tion.

Jews similarly made up at least 30 percent of the white volunteers who rode freedom buses to the South, registered blacks, and picketed segregated establishments. Among them were several dozen Reform rabbis who marched among the demonstrators in Selma and Birming­ham. A number were arrested. Others were taken into custody for attempting to desegregate a swimming pool in St. Augustine, Florida. One of the demonstrating rabbis, Arthur Lelyveld, was severely beaten in Hattiesburg, Mississippi. A young physician, Edward Sachar, volunteering his medical services to the freedom marchers, nearly lost his life as his automobile was forced off a Mississippi back road by local rednecks.

Two young New Yorkers, Michael Schwerner and An­drew Goodman, served in 1964 as voting-registration volunteers in Meridian, Mississippi. One of their coworkers was a young black Mississippian, James Chaney. Together they were waylaid and mur­dered by Klansmen, their bodies dumped in a secret grave. As much as any single factor, it was the nationwide attention given the discov­ery of their corpses that accelerated the passage of the Voting Rights Act of 1965. The Jews had long since achieved their own political and economic breakthrough. Rarely had any community gone to such lengths to share its painfully achieved status with others.