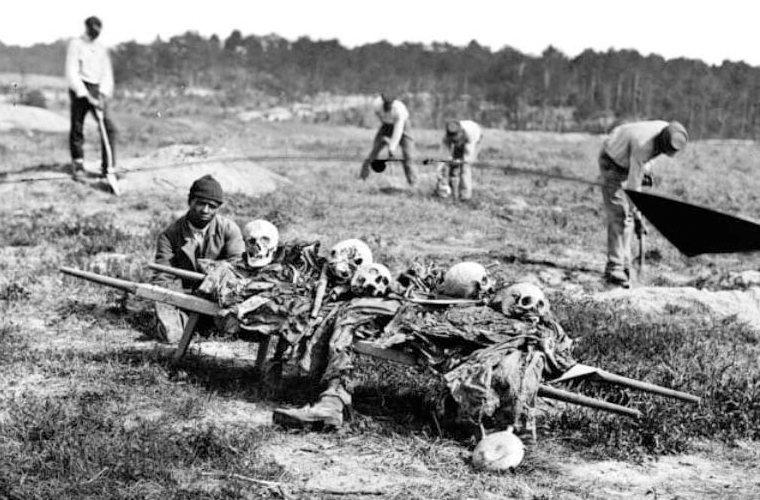 Say the words concentration camps, and most will surmise the topic surrounds World War II and the Nazis; but the hard labor, constant threat of death, and barbarism these microcosmic hells presented weren’t unique to Adolf Hitler — in just one year, around 20,000 freed slaves perished in the Devil’s Punchbowl — in Natchez, Mississippi, U.S.A.

After the Civil War, a massive exodus of former slaves from Southern plantations trekked northward in hopes of reaching a location of true freedom; but embittered soldiers, resentful the people considered property were now free, had other plans.

One tiny town’s population mushroomed twelvefold from the influx, as researcher Paula Westbrook, who has extensively studied Devil’s Punchbowl, noted,

“When the slaves were released from the plantations during the occupation they overran Natchez. And the population went from about 10,000 to 120,000 overnight.”

Unable to grapple with an instant population swell, the city turned to Union troops still lingering after the war to devise a merciless, impenitent solution.

“So they decided to build an encampment for ’em at Devil’s Punchbowl which they walled off and wouldn’t let ’em out,” former director of the Natchez City Cemetery, Don Estes, explained.

Devil’s Punchbowl is so named for a cavernous, bowl-shaped gulch walled off by tree-topped cliffs — an area unintentionally made perfect for a hellacious prison by nature, herself.

A tangle of lush green now tops bluffs near the Mississippi River in Natchez, hiding past atrocities that took place when Union Army soldiers corralled and captured those freed slaves — in worse conditions than they’d endured previously as slaves on sprawling plantations.

In the unrelenting heat and humidity of the deep South, African American men toiled at hard labor clearing thickets of brush, while women and children — not seen as a viable workforce for the task — languished without food or water behind the locked concrete walls of the camp to die of starvation.

Barbarous treatment didn’t even end when someone died.

“The Union Army did not allow them to remove the bodies from the camp,” Westbrook explained. “They just gave ’em shovels and said bury ’em where they drop.”

Bleak conditions of being cramped inside locked walls and forced to work until exhaustion or death also led to the spread of disease and illness — a little-discussed but insidious issue for former slaves, killing up to one million individuals following the ostensive emancipation.

“Disease broke out among ’em, smallpox being the main one,” Estes said of the concentration camp prisoners. “And thousands and thousands died. They were begging to get out. ‘Turn me loose and I’ll go home back to the plantation! Anywhere but there.’”

However, a dearth of information about these mostly postbellum camps indeed leaves significant leeway for conjecture, and a smattering of conclusions say those detained preferred the slightly greater freedom compared to brutality found on the plantations. Additional critics dispute Westbrook and Estes, and the number who died in the Natchez camps, saying the number is likely closer to just 1,000 — but without methodical record-keeping, the figure is impossible to verify with certainty. Either way, this black eye on American history is still one of the largest and most brutal acts of state-sanctioned death this country has ever seen.

As the Civil War drew to a close and during the nascent stages of emancipation, those who had been thrust into slavery and putatively freed held a precarious place outside the society of their enslavement. Thus, ‘legitimately’ freed individuals and ‘escapees,’ alike, were captured and held in ‘contraband camps’ — so named because, as commodities, they were considered contraband by Union troops who had no qualms about perpetuating slavery for their own benefit. Three such camps existed in the Devil’s Punchbowl area of Natchez.

Historians’ descriptions of Devil’s Punchbowl have been loosely anecdotally backed by locals, who describe human skeletons occasionally washing free from the location in times of heavy rains and flooding.

Wild peach trees now dot the basin where human beings, who believed they’d finally won freedom from slavery, sweated through work for different captors until death granted the ultimate reprieve — but Mississippians know better than to taste the bitter fruit fertilized with the blood of atrocity.

Like so much about the history of the United States, sadistic acts perpetrated by officials acting on behalf of the government have been criminally downplayed to lessen the shame and facilitate collective memory loss. But there can be no doubt — whether unintentionally or by design — thousands succumbed to inhumane conditions at these camps, under added duress of lacking the freedom so basic, it’s called the cornerstone of the nation.

Whatever the full truth about Devil’s Punchbowl, it’s a veritable guarantee no history book will be honest or thorough enough to shed light on the excruciating conditions akin to Nazi concentration camps — or even that forced, slave labor continued while America readjusted its crooked and tarnished halo after the Civil War.