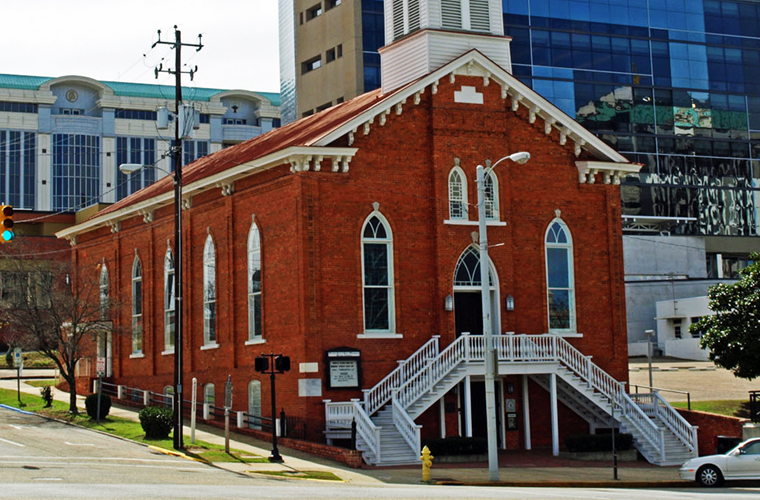 In 1954, Martin Luther King began his first full-time pastorship at Dexter Avenue Baptist Church in Montgomery, Alabama. While at Dexter, King became president of the Montgomery Improvement Association (MIA) and led his congregation and the black community during the Montgomery bus boycott.

Founded in 1877, Dexter was originally called the Second Colored Baptist Church. Congregants met in a hall that had been used as a slave trader’s pen until 1885 when the first worship service was held in the basement of the current structure. On Thanksgiving Day in 1889, the first service was held in the sanctuary, and the church was renamed Dexter Avenue Baptist Church. The church began its activist tradition under the leadership of King’s predecessor, Vernon Johns, whose militant words and boldness kindled the spirit of resistance for blacks at Dexter and throughout Montgomery.

King accepted the call to pastor Dexter while completing his doctoral studies at Boston University. In his acceptance speech, delivered on 2 May 1954, King admitted to his new congregation: “I have no pretense to being a great preacher or even a profound scholar. I certainly have no pretense to infallibility—that is reserved for the height of the divine rather than the depth of the human.” He continued: “I come to you with only the claim of being a servant of Christ, and a feeling of dependence on his grace for my leadership. I come with a feeling that I have been called to preach and to lead God’s people” (Papers 6:166).

Shortly after accepting this position, he proposed a list of recommendations for the revitalization of the church, which were accepted without changes or revisions. King insisted that every church member become a registered voter and a member of the National Association for the Advancement of Colored People. He also organized a social and political action committee, “for the purpose of keeping the congregation intelligently informed concerning the social, political, and economic situation” (Papers 2:290).

On 2 December 1955, King conducted a meeting in the basement of the Dexter Avenue Church, which resulted in the decision to launch the Montgomery bus boycott, and three days later the MIA was founded. As MIA president, King organized and helped direct the boycott from his office in the lower half of the sanctuary. He continued to serve as president of the MIA after the boycott, a commitment that, at times, compromised his efficacy as Dexter’s pastor.

In November 1959, King resigned from Dexter and joined his father the following February as co-pastor at Atlanta’s Ebenezer Baptist Church in order to more effectively lead the Southern Christian Leadership Conference, headquartered in that city. In his resignation to Dexter’s congregation, King admitted that “a multiplicity of new responsibilities poured in upon me in almost staggering torrents. So I ended up futilely attempting to be four or five men in one” (Papers 5:329). In 1976, the city of Montgomery added the church, which was renamed the Dexter Avenue King Memorial Church in 1973, to a list of designated historic sites.