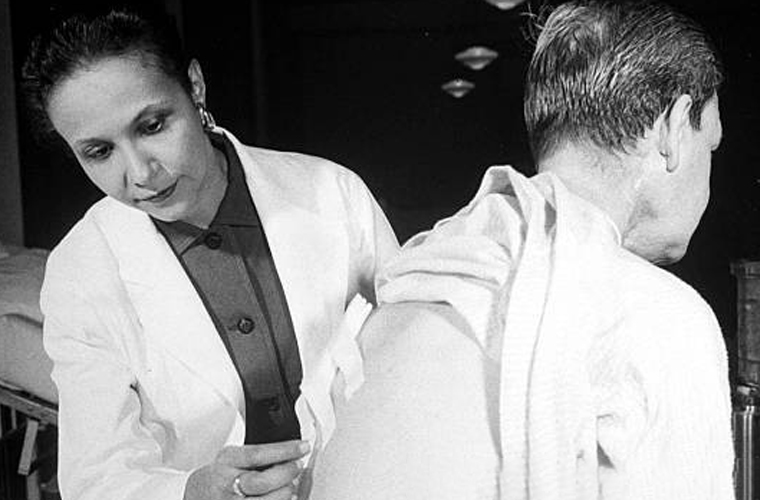 Dr. Jane Wright analyzed a wide range of anti-cancer agents, explored the relationship between patient and tissue culture response, and developed new techniques for administering cancer chemotherapy. By 1967, she was the highest ranking African American woman in a United States medical institution.

Jane Wright graduated with honors from New York Medical College in 1945. She interned at Bellevue Hospital from 1945 to 1946, serving nine months as an assistant resident in internal medicine. While completing a residency at Harlem Hospital from 1947 to 1948, she married David Jones, Jr., a Harvard Law School graduate. After a six-month leave for the birth of her first child in 1948, she returned to complete her training at Harlem Hospital as chief resident.

Chemotherapy was still mostly experimental at that time. At Harlem Hospital her father had already re-directed the focus of foundation research to investigating anti-cancer chemicals. Dr. Louis Wright worked in the lab and Dr. Jane Wright would perform the patient trials. In 1949, the two began testing a new chemical on human leukemias and cancers of the lymphatic system. Several patients who participated in the trials had some remission. Following Dr. Louis Wright’s death in 1952, Dr. Jane Wright was appointed head of the Cancer Research Foundation, at the age of 33.

In 1955, Dr. Wright became an associate professor of surgical research at New York University and director of cancer chemotherapy research at New York University Medical Center and its affiliated Bellevue and University hospitals. In 1964, President Lyndon B. Johnson appointed Dr. Wright to the President’s Commission on Heart Disease, Cancer, and Stroke. Based on the Commission’s report, a national network of treatment centers was established for these diseases. In 1967, she was named professor of surgery, head of the Cancer Chemotherapy Department, and associate dean at New York Medical College, her alma mater. At a time when African American women physicians numbered only a few hundred in the entire United States, Dr. Wright was the highest ranked African American woman at a nationally recognized medical institution.

While pursuing private research at the New York Medical College, she implemented a new comprehensive program to study stroke, heart disease, and cancer, and created another program to instruct doctors in chemotherapy. In 1971, Dr. Jane Wright became the first woman president of the New York Cancer Society. After a long and fruitful career of cancer research, Dr. Wright retired in 1987. During her forty-year career, Dr. Wright published many research papers on cancer chemotherapy and led delegations of cancer researchers to Africa, China, Eastern Europe, and the Soviet Union.