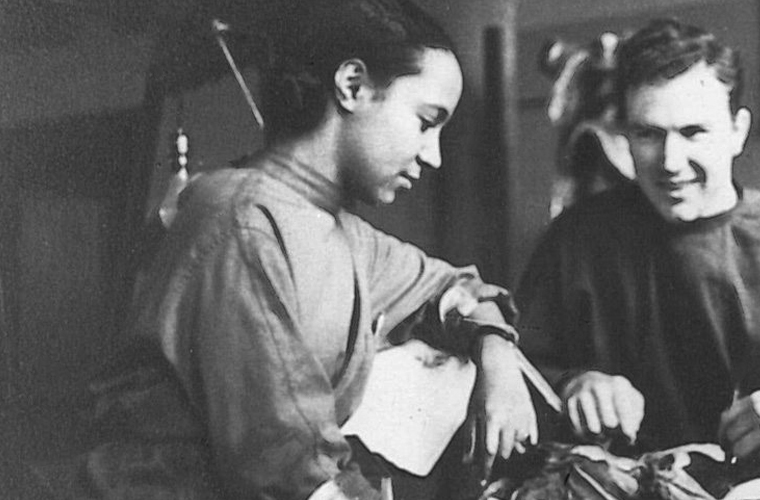 In 1932, Margaret Morgan Lawrence became the only African American student at Cornell’s College of Arts and Sciences. Challenging the double discrimination of racism and sexism that she faced as she launched her career in medicine, Dr. Lawrence has gone on to have a distinguished career of breakthroughs and successes. She was the first practicing child psychiatrist in Rockland County and co-founded the Rockland County Center for Mental Health in New York, and in 1975, she was named the first recipient of the county’s J. R. Bernstein Mental Health Award.

Margaret Morgan Lawrence was born in New York City in 1914. She grew up in Mississippi and returned to New York to attend high school. As a child, she knew that her parents, an Episcopal priest and an elementary school teacher, were devastated when her only brother died two years before she was born. She grew up hoping that if she were a doctor she could save children like him.

Margaret Lawrence was denied admission to Cornell Medical School although she had just graduated from Cornell College with outstanding grades. The dean explained that twenty-five years earlier they had admitted a black student, but that the student had died from tuberculosis before graduating. When she later applied for an internship at Babies Hospital, she was rejected because the doctor’s residence was for men only and the nursing residence refused to give her accommodation because of her race.

Lawrence was only the third black woman to attend Columbia University of Physicians and Surgeons and the sole black graduate in a class of 104 in 1940. She was encouraged by the only black member of the Columbia faculty, Dr. Charles Drew, who said that if she did her best work, race wouldn’t matter. So when her application was rejected at Babies Hospital, she pursued a pediatric internship at Harlem Hospital. Spiritual support and role models also came from prominent professional women in the Harlem community.

While earning her master of public health degree at Columbia University in 1943, under the tutelage of Dr. Benjamin Spock, Dr. Lawrence became aware of the connections among physical, social, and psychological health. Later in her career, she built on Dr. Spock’s integrated vision of the child, family, community, and society, and explored the connections between physical illness and community health.

During World War II, she taught pediatrics and public health at Meharry Medical College in Nashville, Tennessee. Already using ‘homespun child psychiatry,’ Dr. Lawrence decided to pursue formal training in psychiatry. In 1948 she became the first African American resident ever admitted to New York Psychiatric Institute, thanks to the intercession of Dr. Viola Bernard, professor emeritus in psychiatry at Columbia. Lawrence enrolled at Columbia University’s Columbia Psychoanalytic Center, as its first black trainee, and obtained her certification in psychoanalysis.

Dr. Lawrence devoted herself to the child mental health, with accomplishments that included developing some of the first child therapy programs in schools, day care centers, and hospital clinics. For twenty-one years, she served as chief of the Developmental Psychiatry Service for Infants and Children (and their families) at Harlem Hospital, and as an associate clinical professor of psychiatry at Columbia University College of Physicians and Surgeons. She retired from both positions in 1984.

In an article in the Journal of Religion and Health published in 2001, she wrote: “Love is universal, generational, and exists only in relationship.” This seems an appropriate summary of Dr. Lawrence’s approach: a relationship of love to and from her community, her family, her profession, and her church. She describes her work with children and families as integrating psychoanalytic wisdom with spirituality.

Dr. Lawrence’s commitment to community, justice, and peace are clear in the long list of her affiliations and deeds. She has lived in a cooperative community in Rockland County, New York, since 1951. She co-founded the Rockland County Center for Mental Health in 1953 (now part of the Yeager Center). Its child development center renamed the Margaret Morgan Lawrence Children’s Center in 1998, provides early diagnosis and treatment for children under age six who are experiencing emotional trauma.

Since 1943, Dr. Lawrence has been a member of the Peace Fellowship of the Episcopal Church. In 1998 she received an honorary doctorate of humane letters (L.H.D.) from Berkeley Divinity School at Yale University. Margaret Morgan and her late husband Charles Lawrence II raised a son and two daughters, and in 1998, her daughter Dr. Sara Lawrence Lightfoot celebrated her mother’s remarkable career in a biography: Balm in Gilead: Journey of a Healer.