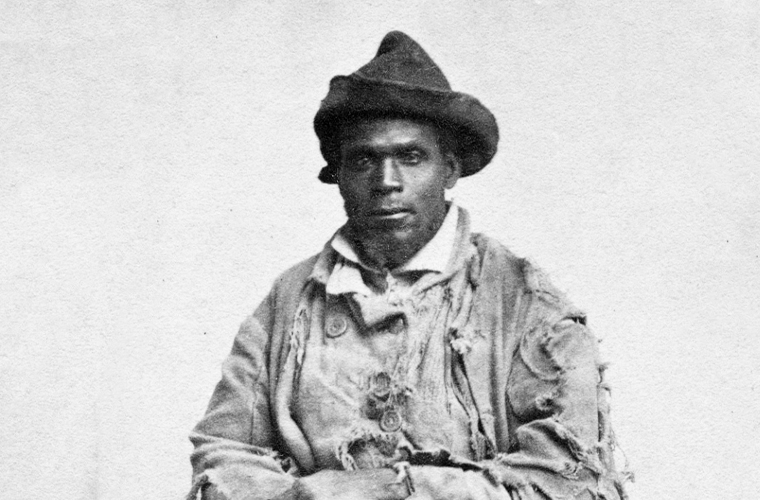 Gordon, also known as “Whipped Peter,” was an escaped American slave who became known as the subject of photographs documenting the extensive keloid scarring of his back from whippings received in slavery. The “scourged back” photo became one of the most widely circulated photos of the abolitionist movement during the American Civil War and remains one of the most famous photos of that era.

“I burned up all my clothes, but I don’t recall that. I never was this way (crazy) before. I don’t know what makes me come that way (crazy). My master come after I was whipped; saw me in bed; he discharged the overseer. They told me I attempted to shoot my wife the first one; I did not shoot anyone; I did not harm anyone. My master’s Capt. John Lyon, cotton planter, on Atchafalya, near Washington, Louisiana. Whipped two months before Christmas.”

Dr. Samuel Knapp Towle, Surgeon, 30th Regiment of Massachusetts Volunteers, wrote in a letter about meeting Gordon. He had expected him to be vicious due to the whip scars on his back. Instead, he said, “he seems INTELLIGENT and WELL-BEHAVED.” Other physicians, like J.W. Mercer, Asst. Surgeon 47th Massachusetts Volunteers as well as a surgeon of the First Louisiana regiment said in 1863 that they had seen many backs like this and that when people talked of humane treatment of blacks, the photo of Gordon’s back told the true story.

The New York Times writer Joan Paulson Gage, noted, “The images of Wilson Chinn in chains, like the one of Gordon and his scarred back, are as disturbing today as they were in 1863. They serve as two of the earliest and most dramatic examples of how the newborn medium of photography could change the course of history.”

On Independence Day 1863, these images appeared in an article about Gordon published in Harper’s Weekly, the most widely read journal during the Civil War. The pictures of Gordon’s scourged back provided Northerners with visual evidence of the brutal treatment of enslaved people and inspired many free blacks to enlist in the Union Army.

Gordon soon afterward enlisted in a U.S. Colored Troops Civil War unit. He was said by The Liberator to have fought bravely as a sergeant in the Corps d’Afrique during the Siege of Port Hudson in May 1863. It was the first time that African-American soldiers played a leading role in an assault.

It’s unclear what Gordon did during the rest of the war, or what his life was like after the Civil War came to an end. Though slavery had been abolished, he—and the others who had been subjugated, beaten, and demeaned during hundreds of years of slavery in the Americas—still bore the scars of enslavement.