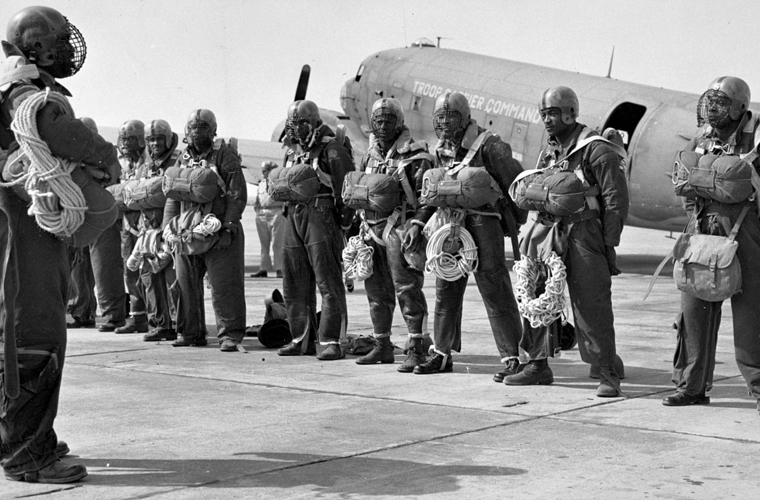 The 555th Parachute Infantry Battalion was activated as a result of a recommendation made in December 1942 by the Advisory Committee on Negro Troop Policies, chaired by the Assistant Secretary of War, John J. McCloy. In approving the committee’s recommendation for a black parachute battalion, Chief of Staff General George C. Marshall decided to start with a company, and on 25 February 1943 the 555th Parachute Infantry Company was constituted (placed on the rolls of the Army

On 19 December 1943, Headquarters, Army Ground Forces, authorized the activation of the company as an all-black unit with black officers as well as black enlisted men. All unit members were to be volunteers, with an enlisted cadre to be selected from personnel of the 92d Infantry Division at Fort Huachuca, Arizona. The company was officially activated on 30 December 1943 at Fort Benning, Georgia. After several months of training, the unit moved to Camp Mackall, North Carolina, where it was reorganized and redesignated on 25 November 1944 as Company A of the newly-activated 555th Parachute Infantry Battalion.

The battalion did not serve overseas during World War II. However, in May 1945 it was sent to the west coast of the United States to combat forest fires ignited by Japanese balloons carrying incendiary bombs. Although this potentially serious threat did not materialize, the 555th fought numerous other forest fires. Stationed at Pendleton Field, Oregon, with a detachment in Chico, California, unit members courageously participated in dangerous fire-fighting missions throughout the Pacific Northwest during the summer and fall of 1945, earning the nickname “Smoke Jumpers” in addition to “Triple Nickles.”

Soon after returning to Camp Mackall in October 1945, the 555th Parachute Infantry Battalion was transferred to Fort Bragg, North Carolina, it’s home for the next two years. During this period the unit was attached to the elite 82d Airborne Division. When the battalion was inactivated on 15 December 1947, most of its personnel were reassigned to the division’s organic 3d Battalion, 505th Airborne Infantry. On 22 August 1950, the 555th Parachute Infantry Battalion was disbanded (removed from the rolls of the Army.