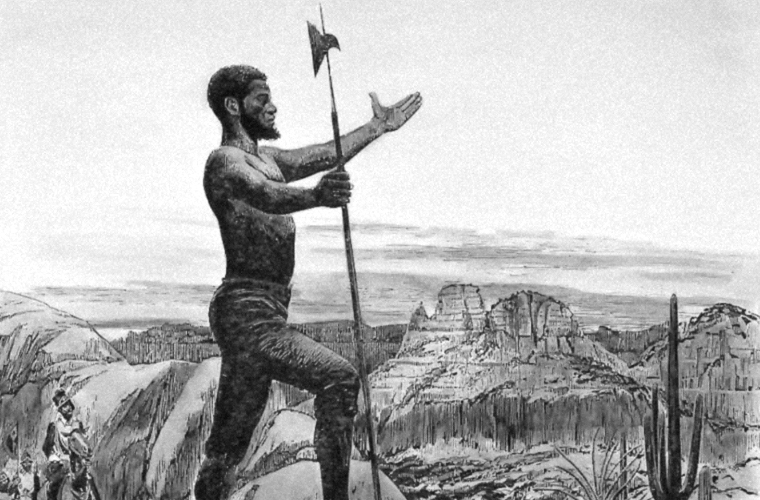 Estevanico (c. 1500–1539) was the first known person born in Africa to have arrived in the present-day continental United States. He was a polyglot (spoke about five native Indian languages) who is known by different names, in the Portuguese, Spanish, Arabic and English languages, in a variety of historical works. Among the most common are Arabic: إستيفانيكو‎; “Mustafa Zemmouri” (مصطفى زموري), “Black Stephen”; “Esteban”; “Esteban the Moor”; “Estevan”, “Estebanico”, “Stephen the Black”, “Stephen the Moor”; “Stephen Dorantes” and “Esteban de Dorantes,” after his owner Andres Dorantes; and “Little Stephen”.

Enslaved as a youth by the Portuguese, he was sold to a Spanish nobleman and taken in 1527 on the Spanish Narváez expedition. As Juan Flores and others recount, he was one of the four survivors in the ill-fated journey of Panfilo de Narvaez in 1528 from Cuba to the Florida coast (Flores 2004). After spending many years in captivity among Indian tribes, Esteban—the gunbearer, scout, slave, and solider—escaped and joined Cabeza de Vaca Andrés, Dorantes de Carranza, and Alonso del Castillo Maldonado and company on a trek across the continent-spanning eight years. Not only was Esteban a remarkable survivor, one of the four out of 600 to survive, but it was believed that Esteban was a powerful healer and medicine man. He would later spend four years walking from Florida to Mexico City and would serve as a guide for missionaries. Esteban was familiar with many indigenous villages and was an “interpreter, emissary and diplomat with the natives” (Taylor 1998:28). It is also reported that Esteban had many relationships with indigenous women.

Later Estevanico served as the main guide for a return expedition to the Southwest where he was eventually killed while trying to enter the Zuni town of Hawikuh in 1539.

Most books assert that Estevanico was born in Morocco but it is historically inaccurate. Estevanico was sold into slavery in 1513 in the Portuguese town of Azemmour, on Morocco’s Atlantic coast. This means Estervanico who was very black skinned African was born in one of the Black African territories, possibly West Africa and sold into slavery by the Portuguese. Some revisionist-contemporary accounts referred to him as an “Arabized black”; “Moor”, a term sometimes used for Berber natives; and “black African”. But Estevanico was no Muslim nor Northern African “Moor.” However, some historians recount that Diego de Guzmán, a contemporary of Estevanico who saw him in Sinaloa in 1536, described him as ‘brown’. (Note that in Spanish America blacks preferred to be called Moreno (brown) to escape color bar).It is also said that he was raised as a Muslim, but because Spain did not allow non-Catholics to travel to the New World, some believe he converted to Roman Catholicism.

Whatever be the case, in 1520 Estervanico was sold to Andrés Dorantes de Carranza, a Spanish nobleman. Estevanico traveled with Dorantes to Hispaniola and Cuba with Pánfilo de Narváez’s ill-fated expedition of 1527 to colonize Florida and the Gulf Coast. Estevanico became the first person from Africa known to have set foot in the present continental United States. After a failed settlement attempt near present-day Tampa Bay, Florida the party made a series of makeshift boats to try and reach Mexico. The boats wrecked off the coast of Texas leaving only Estevanico, Dorantes, de Vaca, and Castillo alive. Castillo’s ability as a faith healer was said to have helped them with the Indians who told them about the 7 wonders. The four had spent years enslaved on many of the Louisiana Gulf Islands. In 1534 they escaped into the American interior, contacting other Native American tribes along the way. The party traversed the continent as far as present-day southeastern Arizona, and through the Sonoran Desert to the region of Sinaloa in New Spain (present-day Mexico), where they were reunited with countrymen.

In Mexico City, the four survivors told stories of wealthy indigenous tribes to the North, which created a stir among the Spanish in the colony. While the other three men returned to Spain, Estevanico was sold to Antonio de Mendoza, the Viceroy of New Spain. He employed Estevanico as a guide in expeditions to the North.
In 1539, Estevanico was one of four men who accompanied Marcos de Niza as a guide in search of the fabled Seven Cities of Cibola, preceding Coronado. Estevanico traveled ahead of the main party with a group of indigenous servants. He was instructed to communicate by sending back crosses to the main party, with the size of the cross equal to the wealth discovered. One day, a cross arrived that was as tall as a person, causing de Niza to step up his pace to join the scouts. Estevanico had entered the Zuni village of Hawikuh (in present-day New Mexico). He had sent a gourd with a red feather, naive to the fact that it was the symbol for war, and they killed him and expelled the indigenous servants from the village. After seeing this, De Niza quickly returned to New Spain.

Accounts suggest the Zuni did not believe Estavanico’s story that he represented a party of whites and that he was killed for demanding women and turquoise. Roberts and Roberts write that “still others suggest that Estevan, who was black and wore feathers and rattles, may have looked like a wizard to the Zuni.” Juan Francisco Maura suggested in 2002 that Estevanico was not killed by the Zuni and that he and friends among the Indians faked his death so he could gain freedom.
Some folklore legends say that the Kachina Chakwaina is based on Estevanico.