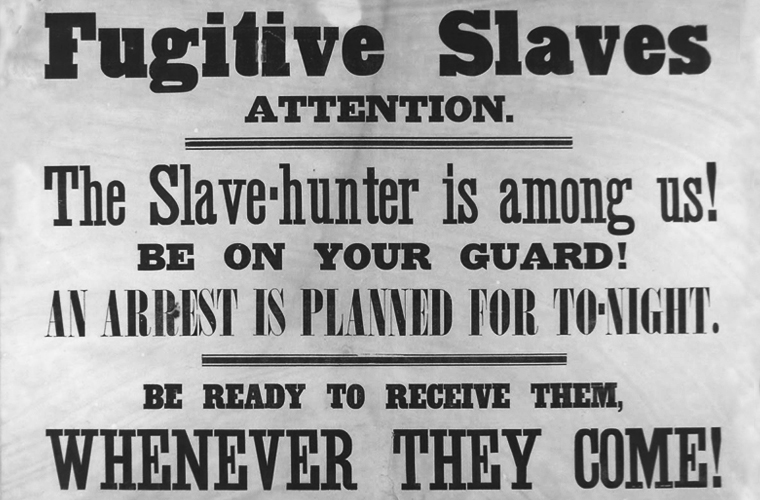 Fugitive slave, any individual who escaped from slavery in the period before and including the American Civil War. In general, they fled to Canada or to free states in the North, though Florida (for a time under Spanish control) was also a place of refuge. (See Black Seminoles.)

From the very beginning of slavery in America, enslaved people yearned to escape from their owners and flee to safety. S.J. Celestine Edwards, who told the story of fugitive slave Walter Hawkins in From Slavery to a Bishopric (1891), described the yearning as “an irrepressible desire for freedom which no danger or power could restrain, no hardship deter.” The danger and difficulty in escaping from slavery are hard to imagine. Most slaves were illiterate and had no money and few, if any, possessions. The color of their skin made them easy targets during the daylight for those who would hunt them down—often with the help of bloodhounds—and return them to their owners.

Many runaways had long distances to travel on foot before they were able to reach safety in a free state or in Canada. Not surprisingly, then, the vast majority of slaves who escaped from bondage were captured. Most of those who were returned to their owners were severely punished in an effort to deter others from attempting to leave. Despite the dangers, however, many runaways managed to find their way north, into states that had outlawed slavery.

Because of the incredible physical challenge of the journey to freedom, most of the slaves who ran away were young men. One study that examined advertisements in newspapers in the early 1800s calling for the return of fugitive slaves noted that 76 percent of all fugitive slaves were younger than age 35, and 89 percent were male.

Escape became easier for a time with the establishment of the Underground Railroad, a network of individuals and safe houses that evolved over many years to help fugitive slaves on their journeys north. The network was operated by “conductors,” or guides—such as the well-known escaped slave Harriet Tubman—who risked their own lives by returning to the South many times to help others escape. The “railroad” is thought to have helped as many as 70,000 individuals (though estimations vary from 40,000 to 100,000) escape from slavery in the years between 1800 and 1865. Even with help, the journey was grueling. Small groups of runaways would travel at night, sometimes a distance of 10 to 20 miles (16 to 32 km) from station to station, always at risk of recapture.

Once they had escaped, many found the freedom they had dreamed of illusory. Often their new lives in the so-called free states were not much better than they had been back on the plantation. Segregation and discrimination were pervasive in many parts of the North, and, having limited access to skilled professions, many found it difficult to earn a living.

The situation in the North was made still worse by the passage of the Fugitive Slave Act of 1850, which allowed heavy fines to be levied on anyone who interfered with a slave owner in the process of recapturing fugitive slaves and forced law-enforcement officials to aid in the recapture of runaways. The upshot was that distant Canada became the only truly safe destination for fugitive slaves.

Some of those who escaped wrote narratives about their experiences and the difficulties they faced on the journey north. One of those, Narrative of the Life of Henry Box Brown (1849), tells of the author’s incredible escape packed in a shipping crate. Another, Slave Life in Virginia and Kentucky; or, Fifty Years of Slavery in the Southern States of America (1863), tells the story of a slave named Francis Fredric (sometimes spelled Fredric or Frederick), who suffered extreme brutality at the hand of his owner. He was able to escape because he had always been kind to his master’s dogs and was able to fool them into running past him when they were supposed to be following him.

Frederick Douglass, among the best known of all fugitive slaves, expressed particularly well in his writings the bittersweet quality of finding freedom. He is at first overcome with joy that he has arrived in a free state. But almost immediately, he says, he was:

seized with a feeling of great insecurity and loneliness. I was yet liable to be taken back and subjected to all the tortures of slavery. This in itself was enough to damp the ardor of my enthusiasm. But the loneliness overcame me. There I was in the midst of thousands, and yet a perfect stranger; without a home and without friends, in the midst of thousands of my own brethren—children of a common Father, and yet I dared not to unfold to any one of them my sad condition.

The experiences of runaway slaves are depicted in a number of classics of American literature. Although Harriet Beecher Stowe’s Uncle Tom’s Cabin (1852) gives evidence of its 19th-century roots and is not always easy to swallow in the 21st century, it presents a fair picture of the vicissitudes of fugitive slaves in the person of Eliza Harris, who runs away when she discovers that her young son is to be sold away from the family to another slaveholder. Similarly, the character Jim in Mark Twain’s The Adventures of Huckleberry Finn (1884) is a runaway slave who befriends and protects Huck. Though Twain’s portrayal of Jim has been characterized variously as sympathetic, racist, and stereotypical, the relationship that develops between the slave and the young white boy indicates the possibilities of a post-slavery society. A third, more contemporary, account of the experiences of a fugitive is given from the perspective of an African American woman in Toni Morrison’s powerful Pulitzer Prize-winning novel Beloved (1987). Based on actual events, it tells the story of Sethe, a runaway who kills her small child rather than allowing her to be recaptured and enslaved.