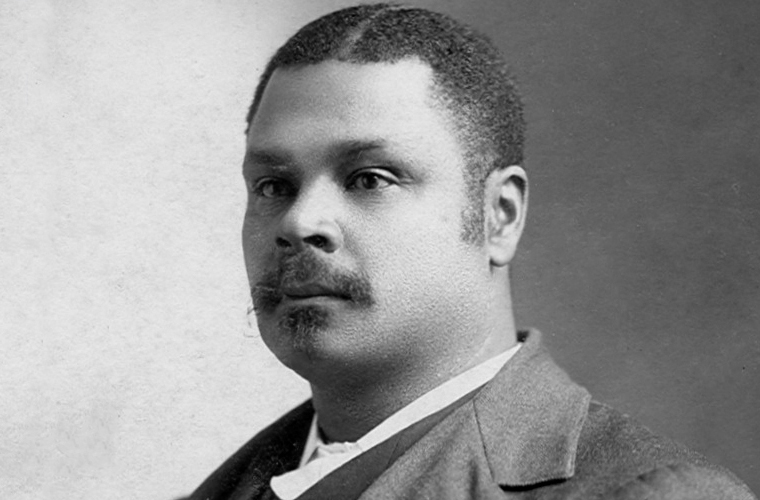 A successful attorney, White was among the most notable black Republican political leaders of his era: the last African American elected to Congress during the 19th century, and the first to serve in the 20th century.  One of four black congressmen elected from North Carolina’s Second District, called the “Black Second” for its black-majority population, during and after Reconstruction, White served two terms (1897–1901).  He was the only black member of the U.S. House during his two terms, and the nation’s last black congressman until 1929.

Born to a free mixed-race father and an unnamed mother, perhaps a slave, George White was raised as a free child in Columbus County, North Carolina.  Wiley Franklin White was a justice of the peace in Columbus County during Reconstruction, before moving to Washington, D.C., in 1872 to work for the U.S. Treasury Department.  George White was raised by his stepmother, Mary Anna Spaulding White, a granddaughter of a former slave and prosperous turpentine farmer Benjamin Spaulding. Educated privately before the Civil War, George White later attended Freedmen’s Bureau schools and the Whitin normal school in Lumberton. After graduating from Howard University in 1877, he then worked as a schoolteacher and principal in New Bern while reading the law under former Superior Court Judge William John Clarke.

Among the first half-dozen black attorneys admitted to the N.C. bar (1879), White established a thriving legal practice in New Bern and became active in Republican politics, winning election from Craven County to N.C. House of Representatives (1880) and N.C. Senate (1884).  In 1886, he won office as solicitor of the state’s Second Judicial District, a six-county area in northeastern North Carolina; reelected in 1890, he was the nation’s only elected black prosecutor for eight years.

After Craven County was removed from the Second district, White moved to Tarboro in 1894 to pursue the congressional nomination.  He lost in 1894 to his brother-in-law, former Rep. Henry P. Cheatham, who lost his bid at reelection.  White came back to defeat Cheatham in 1896 for the nomination and defeated Democratic incumbent Frederick A. Woodard and a Populist opponent in the general election.  In March 1897, George White was sworn in as a member of the 55th Congress; he was reelected to his seat in November 1898, again in a three-way race.  White also served as a state delegate to the Republican national conventions of 1896 and 1900.

From 1897 to 1901, White became a national spokesman for equal rights and fair treatment for the nation’s African American population, as well as an outspoken opponent of lynching violence and Southern disfranchisement of black voters.  In early 1900, he sponsored a bill to make lynching a federal crime punishable by death, but that bill died in committee. During his terms, he arranged appointments for more than three dozen black postmasters in the Second District, the largest number appointed in any district in the 19th century.

After voters amended North Carolina’s constitution to ban illiterates from voting—effectively disfranchising more than 100,000 black voters who could not qualify under the new “grandfather clause”—George White chose not to seek reelection in 1900 and moved his family to Washington, D.C.  On January 29, 1901, he delivered an oft-reprinted farewell speech to the U.S. House, pleading for equal justice for black Americans and predicting the eventual return of blacks to Congress.  An active member of several civil rights organizations after 1898, White served as a national vice president of the National Afro-American Council (1900-1902) and helped found the Philadelphia chapter of the NAACP in 1913.

After leaving Congress, White practiced law in Washington, D.C., and created the George White Land Development Company, through which shareholders established the all-black town of Whitesboro, New Jersey, after 1901. In 1906, he moved his law practice to Philadelphia, where he also established that city’s first black-owned commercial savings bank, People’s Savings Bank.  In 1912, he unsuccessfully sought his party’s nomination in a special election for a vacant Congressional seat from Philadelphia. He remained active in local Republican politics, and in 1916, became the state’s first black alternate delegate to the Republican national convention.  A year before his death, he was appointed as an assistant city solicitor for Philadelphia.

White was married four times.  His first wife, Fanny Randolph White (m. 1879), died in 1880.  His second wife, Nancy Scott White (m. 1882), died in 1882.  In 1887, he married Cora Lena Cherry, who died in 1905.  He had four children: Della, Beatrice, Mary (Mamie), and George, Jr.  He died of natural causes in Philadelphia in December 1918 and was survived by his fourth wife, Ellen Avant McDonald White (m. 1915).
State highway historical markers in White’s memory are located in New Bern and Tarboro. He is buried in Eden Cemetery outside Philadelphia.