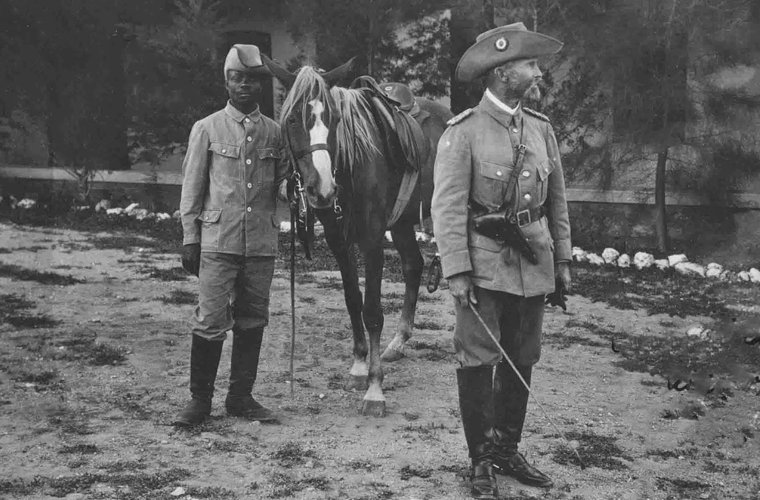 German-Herero conflict of 1904–07, the conflict between the Herero people and German colonial troops in German South West Africa in 1904 and the ensuing events of the next few years that resulted in the deaths of about 75 percent of the Herero population, considered by most scholars to be genocide.

The areas of German South West Africa (now Namibia) were formally colonized by Germany between 1884–90. The semiarid territory was more than twice as large as Germany, yet it had only a fraction of the population—approximately 250,000 people. In contrast to Germany’s other African possessions, it offered little promise for large-scale mineral or agricultural extractions. Instead, South West Africa became Germany’s only real settler colony. By 1903 some 3,000 Germans had settled in the colony, primarily on the central high grounds. The launch of this new settler society, albeit still small, disrupted the socioeconomic balance of the territory and resulted in conflict. Apart from overarching anticolonial concerns, the primary points of friction were access to scarce resources such as land, water, and cattle. The largest conflict involved the Herero nation, a mainly pastoral people who over the preceding decades had adopted various traits of modernity, including the use of horses and guns.

The fighting began on Jan. 12, 1904, in the small town of Okahandja, the seat of the Herero chieftaincy under paramount leader Samuel Maharero. It is still unclear who fired the first shots, but by noon that day Herero fighters had laid siege to the German fort. In the following weeks, fighting rippled out across the central high grounds. Seeking to gain control of the situation, Maharero issued specific rules of engagement that precluded violence against women and children. Nevertheless, 123 settlers and soldiers were killed in these attacks, including at least four women.

Theodor Leutwein, military commander and governor of the colony, was in charge of the German response. Since the Herero were well armed and, moreover, significantly outnumbered the German colonial garrison, he favored a negotiated settlement of the conflict. He was, however, overruled by the General Staff in Berlin who demanded a military solution. On April 13 Leutwein’s troops were forced into an embarrassing retreat, and the governor was consequently relieved of his military command. In his place the German emperor, William II, appointed Lieut. Gen. Lothar von Trotha as the new commander in chief. He was a colonial veteran of the wars in German East Africa and of the Boxer Rebellion in China.Von Trotha arrived on June 11, 1904. At that point, there had not been any major combat for two months. The Herero had fled to the remote Waterberg plateau at the edge of the Kalahari (desert) to distance themselves from the German troops and supply lines, in an attempt to avoid additional battles and safely await a possible negotiation for peace or, if necessary, be well positioned to escape into British Bechuanaland (now Botswana). Von Trotha used this lull to gradually encircle the Herero. Moving his troops to the Waterberg plateau was a large undertaking, considering that the German maps of this area were incomplete and because water had to be hauled across the rugged terrain, along with the heavy artillery that would be vital for a successful attack. The general’s expressed strategy was to “annihilate these masses with a simultaneous blow.”

In the early morning of Aug. 11, 1904, von Trotha ordered his 1,500 troops to attack. Standing against an estimated 40,000 Herero, of whom only some 5,000 carried arms, the Germans relied on the element of surprise as well as their modern weaponry. The strategy worked. Continuous shelling by the artillery sent Herero combatants into a desperate offensive, awaited by the German machine guns. By late afternoon the Herero were defeated. However, a weak German flank to the southeast allowed the majority of the Herero nation to make a desperate escape into the Kalahari. In this exodus to British Bechuanaland, many thousands of men, women, and children eventually died of thirst.

In subsequent months von Trotha continued to pursue the Herero into the desert. Those who surrendered or were captured by the Germans were often executed summarily. By early October, however, von Trotha was forced to abandon the pursuit, due to exhaustion and lack of supplies.

When von Trotha was no longer able to pursue the Herero into the desert, patrols were stationed along the perimeter of the desert to prevent the Herero from returning to the German colony. The outline of this new policy, which was announced on October 3 at the waterhole of Ozombu Zovindimba, was dubbed the “extermination order” (Vernichtungsbefehl). It read, inter alia:

Within the German boundaries, every Herero, whether found armed or unarmed, with or without cattle, will be shot. I shall not accept any more women and children.

The order stood for two months. On Dec. 9, 1904, it was rescinded by the emperor, following sustained lobbying by Reich Chancellor Bernhard von Bülow. In its place, a new policy was introduced. Based on the British example in Southern Africa of rounding up the enemy—civilians as well as combatants—and confining them to camps (see South African War), the Germans introduced a system of human enclosures dubbed Konzentrationslager, a direct translation of the English term “concentration camp.” These camps were set up in the largest towns where the need for labor was greatest. Over the next three years, Herero prisoners, mainly women, and children, were rented out to local businesses or were forced to work on government infrastructure projects. The conditions of work were so severe that more than half of all prisoners died within the first year.

In October 1904 the southern Nama communities had also risen up against German colonialism. Like the Herero, the Nama ended up in concentration camps. The vast majority were sent to the Shark Island camp, off the coast of the harbor town of Lüderitz. It is estimated that up to 80 percent of the prisoners on Shark Island died there.

In 1966 the German historian Horst Drechsler first made the case that the German campaign against the Herero and Nama was tantamount to genocide. In all, about 75 percent of the entire Herero population and some 50 percent of the Nama population died during the campaign. This would make it one of the most effective genocides in history.