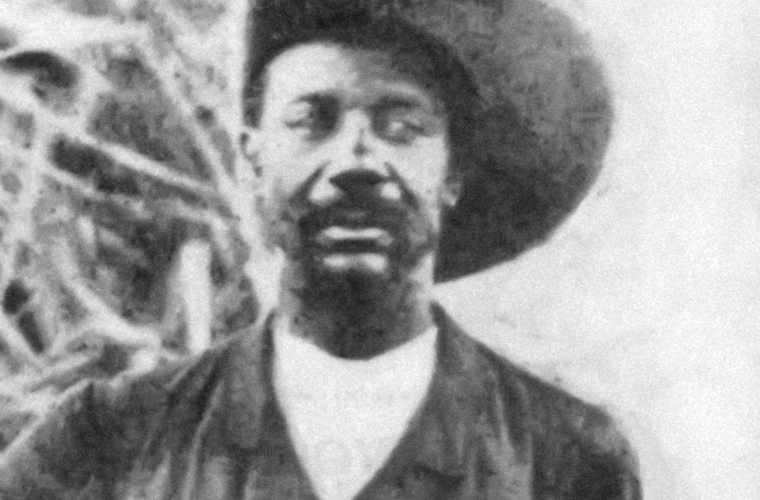 Samuel Maharero (1856 – 14 March 1923) was a Paramount Chief of the Herero people in German South-West Africa (today Namibia) during their revolts and in connection with the events surrounding the Herero genocide. Today he is considered a national hero in Namibia.

Maharero was the son to Kamaharero (or Maharero), an important Herero warrior and cattle raider. Samuel Maharero went to the local Lutheran schools, where he was seen as a potential priest. When his father died in 1890, he gained the chieftainship in the area of Okahandja, although he did not gain much of his father’s wealth and cattle according to Herero inheritance customs. Initially, he maintained fairly good relations with the German colonial administration under Theodor Leutwein. However, increasing problems, involving attacks by German farmers, economic difficulties and pests, and the use of Herero land for railroads, diminished relations.

Maharero secretly planned a revolt with the other chiefs against the German presence. The initial attacks in the revolt, begun on January 12, 1904, were successful and involved the killings of several German farmer families. Leutwein was replaced as military leader by Lothar von Trotha, who brought 15,000 troops and created a bounty of 5,000 marks for the capture of Maharero. The Herero fighters were destroyed at the Battle of Waterberg on August 11, 1904, and the remaining ones were driven into the deserts of the Omaheke Region.

Maharero succeeded in leading around 1000 of his people to the British Bechuanaland Protectorate (today Botswana). He remained leader of the exiled Herero and became an important vassal of Sekgathôlê a Letsholathêbê, a chief in northern Bechuanaland. Samuel Maharero died there in 1923.

On August 23, 1923, his body was returned to Okahandja and was ceremoniously buried.

Samuel Maharero is one of nine national heroes of Namibia that were identified at the inauguration of the country’s Heroes’ Acre near Windhoek. Founding president Sam Nujoma remarked in his inauguration speech on 26 August 2002 that:

Chief Samuel Maharero started to make plans for an uprising against the German colonial authorities and white German settlers in the country. As a result, in January 1904 the uprising began and chief Maharero’s forces surrounded the German colonial settlers at Okahandja, Omaruru, and the famous Battle of Ohamakari near the Waterberg Mountain. The strength of his forces compelled the German colonial troops to send in reinforcements under the notorious General Lotha von Trotha who carried out an extermination order to wipe out all women, children and elderly persons. To his revolutionary spirit and his visionary memory, we humbly offer our honor and respect.