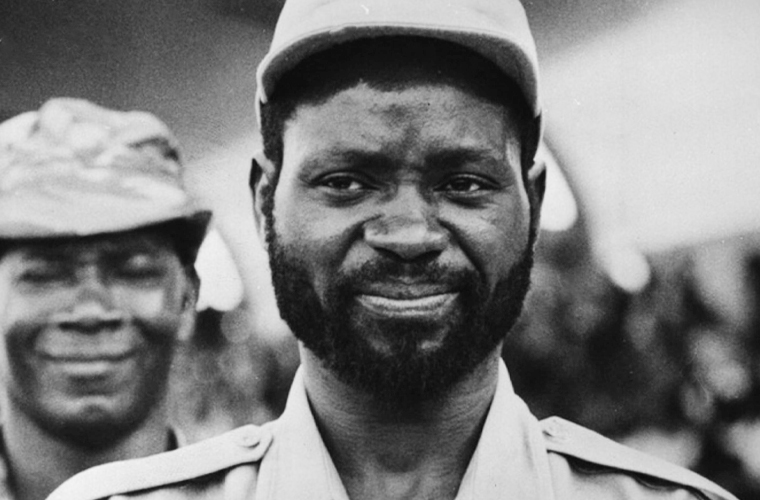 The fire of liberation and independence in Africa started with the determination of a few African liberators. Some of them were drawn from the military, while others were politicians and freedom fighters who wanted to see the white man leave Africa. The fire spread across Africa, and soon, European powers started to lose the fight.

Samora Machel is the first president of Mozambique, an African legend, recognized for being Mozambique’s liberator from colonialism. He is till this day called the Father of the Nation by Mozambicans.

Before 1891 when Mozambique officially became a Portuguese colony, Mozambique was a developed, wealthy country, it was then part of the Mwene Mutupa Empire, known for international trade and civilization as the mineral wealth of Southern Africa was traded with East Asians and Arabs through her ports.

Mozambicans were proud and boastful for what they had. Leo Frobenius, a German historian, in his description of Mozambique, said “[…]the crowd was well dressed in silk and velvet clothes. There were great and well-organized states down to the very last details. There were powerful sovereigns and wealthy industries. They were civilized to the bone! It was the same on the East Coast, like Mozambique for example”

After decades of resisting colonial occupation, Mozambique fell with the arrival of Portuguese slavers and an estimated 1,000,000 Africans were deported from the empire.

The Portuguese government would refuse to be called colonial masters as they had been in Africa for 400 years. They considered Mozambique, Cape Verde, Guinea Bissau, Sao Tome, and Angola as part of their multicontinental states. Though their philosophy differed from those of other European countries, their methods didn’t differ in that they still meted out cruel practices on Blacks.

Blacks were deprived of their lands, suppressed for not following the rules. The names of their people and places were changed to Portuguese and they were enslaved into forced labor by the Lisbon government who was supported by multinational companies. By 1950, a system of apartheid had been established.

Blacks would no longer move freely on their lands. Whites immigrated in their number to take up high political positions and only 4,000 out of 5.7 Million Mozambicans had the rights to vote.

Samora Moises Machel, born in 1933 was the grandson of a man who followed Ngungunyane. Ngungunyane was a historical icon who is recognized for his fight against Portuguese occupation. Samora Machel grew up experiencing the woes caused by the colonial segregation law as he was from a family of farmers who suffered this first hand.

As a native, he attended a Catholic school and became a nurse in Lorenço Marques, in present-day Maputo. There he had the opportunity of holding one of the few positions, opened to blacks.

Having witnessed Whites take over lands that belonged to Blacks, losing a brother to forced labor in South African mines, and protesting against Nurses’ low wages, Samora embraced Anti-colonial ideas. This led to his joining Frente de Libertaçăo de Moçambique (Frelimo), it was the independence party founded by Eduardo Mondlane, the man considered as the father of Mozambique’s independence.

In 1962, on noticing that he was being watched by the police, Samora joined Frelimo on exile in Tanzania where they had been received by President Nyerere.

The fight for liberation heightened after two years of unfruitful negotiation between Frelimo and the colonial government. Eduardo decided to raise a trained and armed army with the help of the Soviet Union, China, and Cuba. Samora was trained in Algeria for the battle. Eduardo sent out his army from Tanzania through Northern Mozambique, with the aid of Blacks who themselves were weary from being oppressed.

The Portuguese government retaliated with vicious atrocities. Then Eduardo devised a means of frustrating the enemy forces by sending out his army in small groups and taking advantage of the Monsoon and mines on the grounds. His guerrilla method brought great losses to the Europeans.

In 1969, Eduardo was killed in a bomb planted by the Portuguese and Samora Machel took over the Frelimo. He led the Frelimo for four years with great intelligence and strength and progressed from the North to Southern Mozambique, crossing the Zambezi river, and causing disarray among the Portuguese.

In 1974, the white military overthrew President Salazar’s dictatorial government during the carnation revolution, fatigued by the continuous colonial wars. Samora Machel then successfully negotiated the departure of the strong White minority. Through Tanzania, he crossed the country from North to South, celebrating Mozambique’s freedom from years of colonial occupation.

Samora Machel had built a communist ideology while he was with Eduardo Mondlane and their foreign allies. With this ideology, he restored lands to Africans, built health centers, gave free healthcare and education, and had Blacks come out of Ghettos to occupy abandoned Portuguese houses. He was loved for his charm, wisdom, and oratory gifts, though he also dealt ruthlessly with those he considered as the country’s traitors.

With the aim of ridding Southern Africa of Dutch and English colonial occupation, in support of the ANC, he corroborated with Tanzania, Zambia, Zimbabwean ZANU, and Namibian SWAPO to create the renowned Front Line. This angered the whites who in retaliation, created a movement, the Renamo which consisted of fallen Portuguese and the Mozambican Frelimo enemies.

This led to a war between Frelimo and Renamo and Samora Machel was forced to sign a non-aggression agreement with South Africa and also withdraw his support to the ANC in exchange for the colonial government to withdraw its support to Renamo.

Samora Machel’s animosity against the racist government fueled by his communist ideology, further made him an enemy to the government. In 1986, Samora Machel attended a meeting in Zambia where he tried convincing Mobutu and Malawian president Kamuzu Banda to desist from supporting the apartheid government and its local allies. On his way back, Samora Machel’s plane crashed and he died on the 18th of October 1986 at age 53. Though it is unproven, it is however believed to this day that the Dutch settlers had a hand in his demise.

The war between Frelimo and Renamo continued until 1992, bringing about the death of an estimated 1 million people, its end, however, occurred simultaneously with the end of the apartheid government.

Samora Machel is recognized to this day as a heroic African figure who fought against apartheid, social injustice, and tribalism. His legacy lives on as Frelimo has since the end of apartheid continued to win all the presidential elections while all racist government in South Africa, Namibia and Zimbabwe have failed. 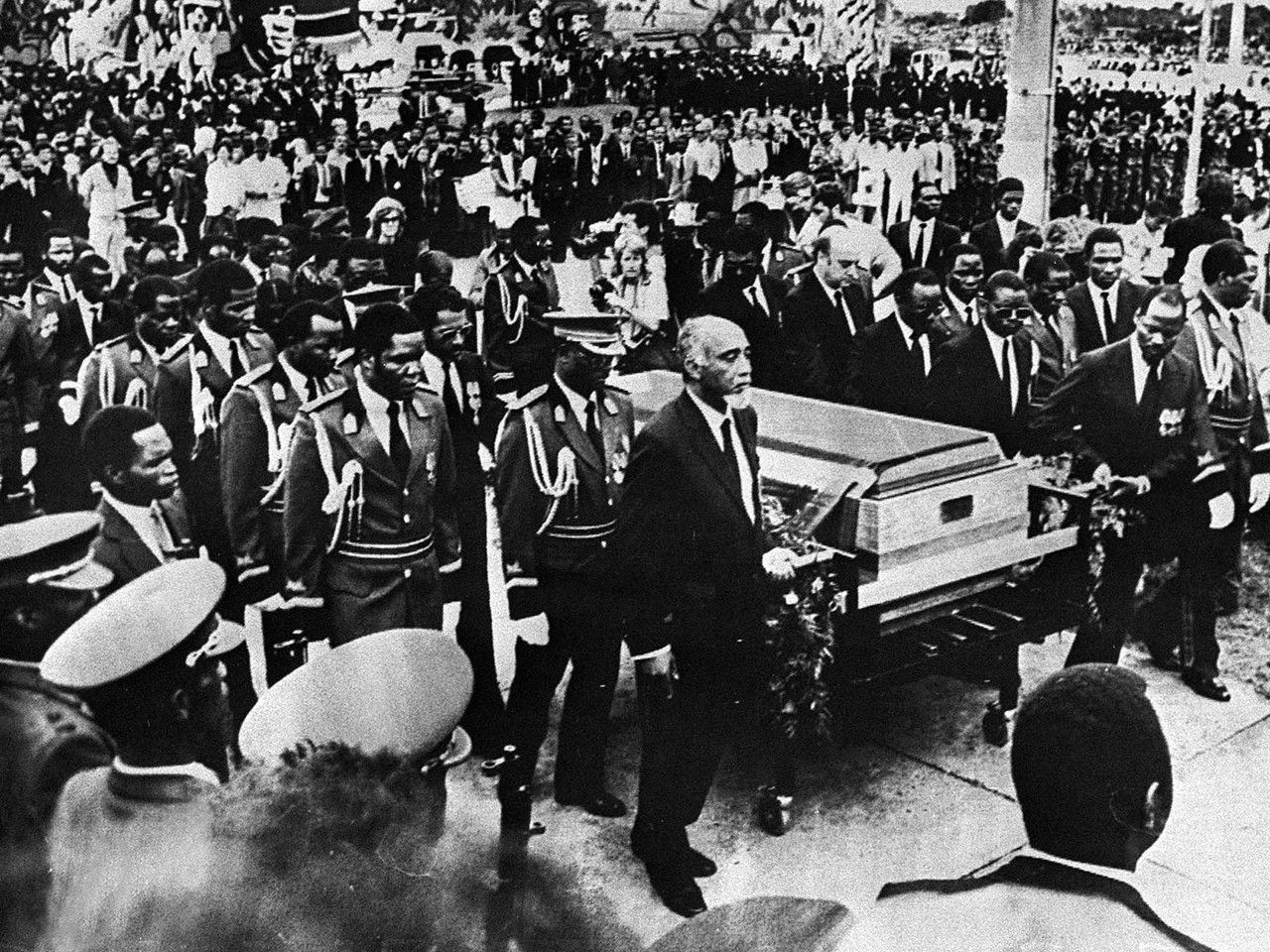 Casket with the remains of Samora Machel carried by Frelimo political bureau.